We Crave Attention, Then Come Over All Coy 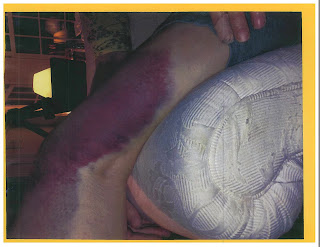 For those of you following along, here's Earthgirl's knee last night. (Background here for those who, um, need). The bruise is growing, larger and more colorful. There will not be a ten mile hike this weekend.

I've mentioned this before: my first love was baseball. After a bitterly delicious apostasy in the mid-90s (shouldn't all apostasies be delicious in their bitterness?) I've let baseball back in a few innings at a time though I'll never give my heart again. Still, RIP Don Zimmer, who embodied the wondrous daydream of the baseball-lifer and was a major character in baseball when baseball was part of my daily life. We had dinner with Hamster last night (who, along with Landru, took me to an Oriole game at Memorial, an 8-5 loss to the Washington Senators Texas Rangers, for my stag-party). He and Planet and I are going to try and get to a Nats game, perhaps as early as the next homestand (I didn't hear about Zimmer's death until this morning, Serendipity be great). Other Mocomofos and Bawlmer hons encouraged to join us.

I only link-fished friends this morning for new posts


otherwise have two songs (fell asleep listening to Stephan Mathieu) and a poem (fell asleep reading Mark Ford, whose name I mention here since the poem's title is the beginning of a sentence, whose poetry I am overwhelmingly pleased to have just discovered, who has just been given his own tag, there will be more here):

attention, then come over all coy, and start fiddling
with watchstrap and buttons, or talking about a friend
of a friend who claims to own the world's largest collection
of aquarium ornaments, yet has no aquarium. In the mean-
time the tough-minded argue each of us is loved not
so much for his or her oddities, as in spite of them, or even
faute de mieux! Families form, squabble on long
car journeys, invent nicknames for strangers; the tires hum
their own tune, and in shimmering forecourts
the baked atmosphere presses from all sides, searing
the lungs. We commend, internally, the wisdom of the soft-
voiced tycoon who acquired the land, only
to flatten it, then skilfully divide it into distinct
yet related lots; a spongy layer of wood-chips lines
the criss-crossing paths, and whispers faintly underneath.

As it was drummed into me, I would drum it
into others: the art or science of management never
pauses, though it occasionally lies low, or enacts
retreat like a Parthian archer. Invariably, speed and stealth
take advantage of the famous, non-existent 'margin' poor
Herbert Pocket kept urging upon Pip; a sound decisive
as the whirr and double click of a computer mouse
signals the arrival of the inner bailiffs, and an era
of thrift. Listen harder, and through the virtual prison-bars
comes swarming the buzz of creditors and debtors over
lunch, each pledging allegiance to the other, to knowledge,
to the mysteries of living on this air....