Lean on a Chimney to Inhabit the Sky 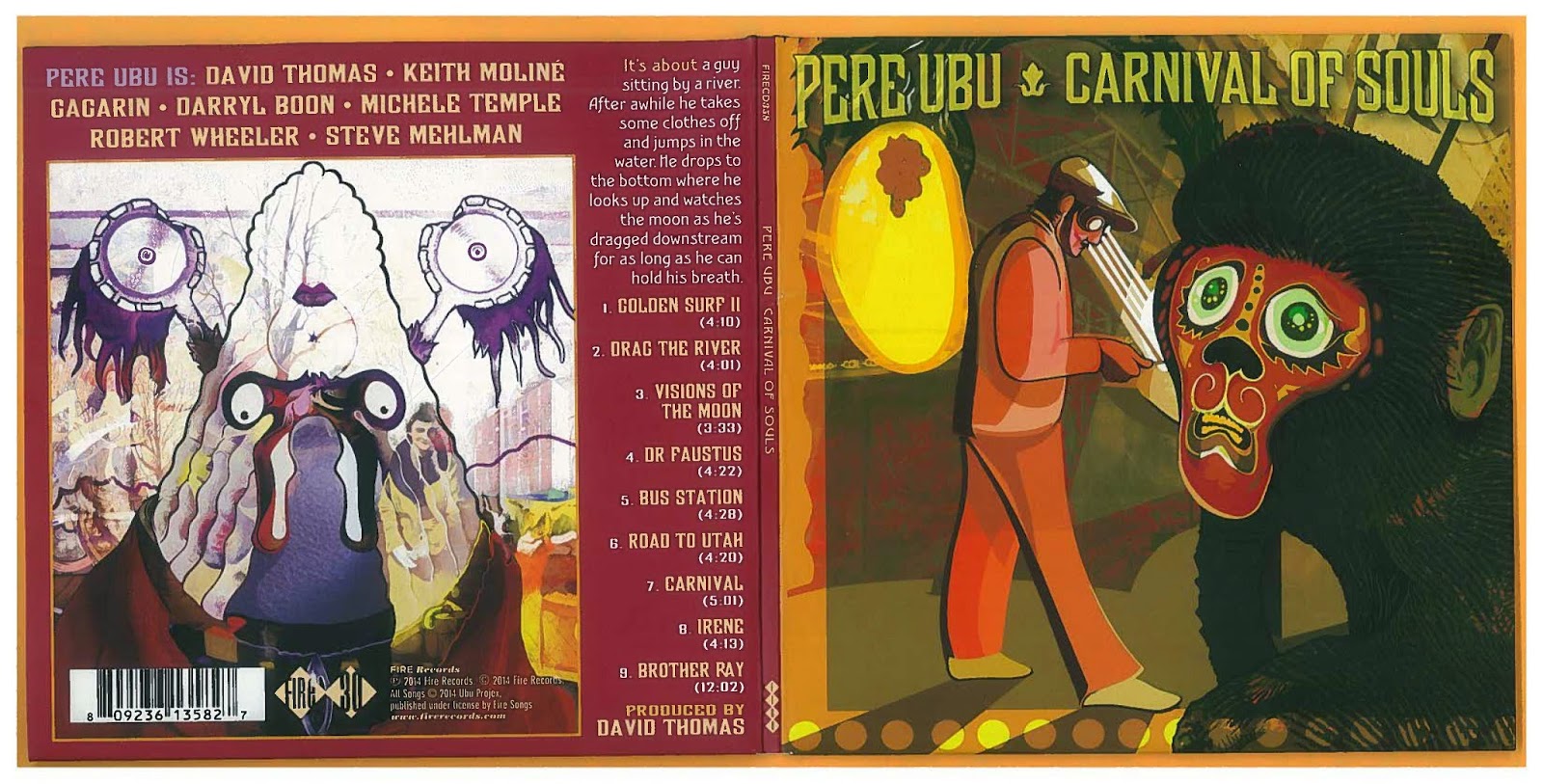 In the mail yesterday, new Pere Ubu CD. Sweet package, as always. We're Kensington to Frederick to Hagerstown to Hancock to Cumberland to Morgantown to Washington to Wheeling to Zanesville to Gambier and back this weekend, gonna be a lot of Ubu in the car. 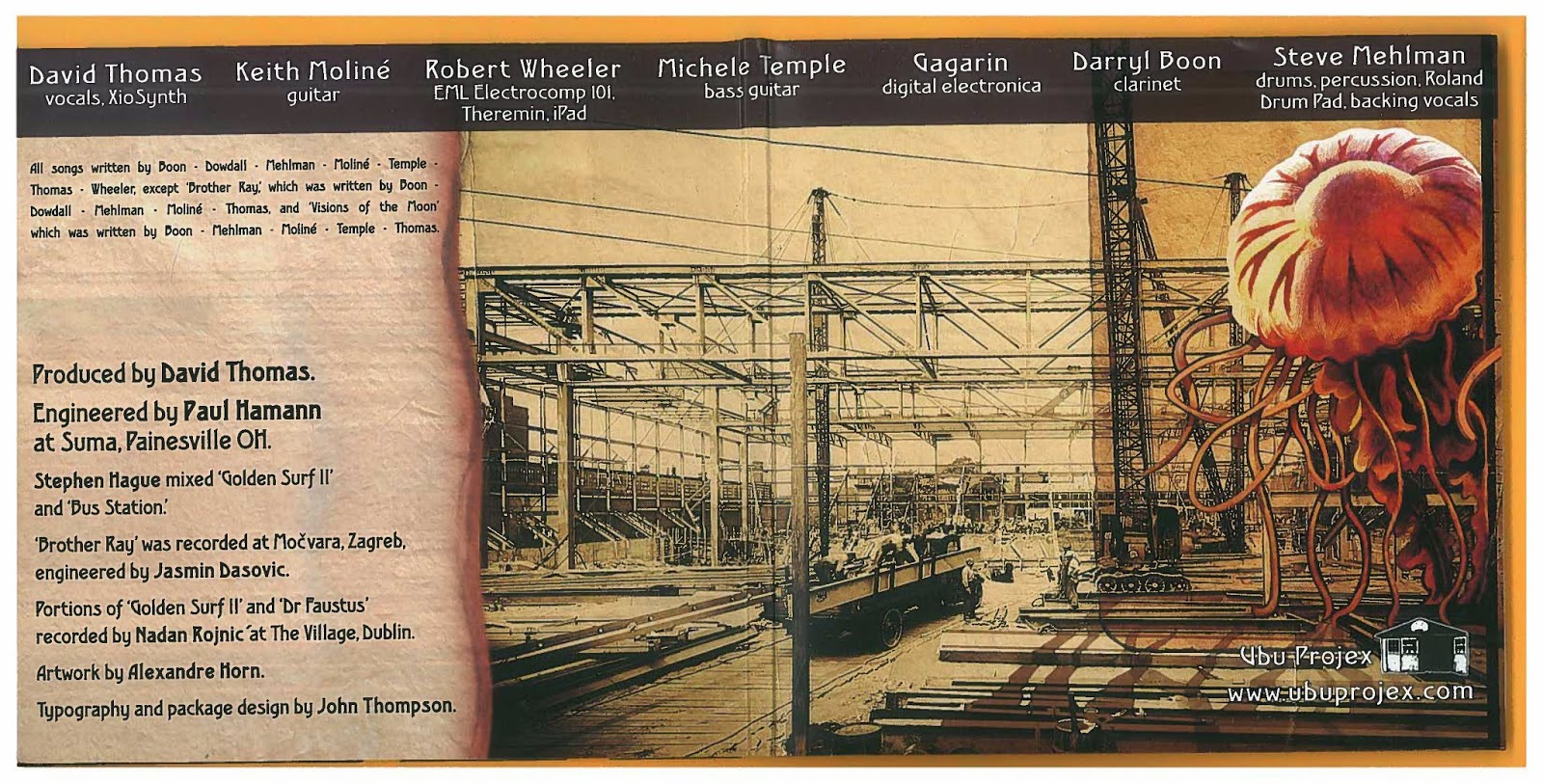 I look in that one kind of dwindled. And in this,
look up, a truncheon in my fist, tin pot
on my head, the war. My father, I’m looking at, is my
age then and thin, his pants streak to the ground,
shadows of rosevines . . . His father sits beneath
a cat. Here the shadow has more flavor than my
trains, elbows on livingroom floor, bangs that
curl, opera broadcast, The Surreptitious Adventures of
Nightstick. I lie in the wind of the sun and hear
toots and smell aluminium smoke. The tiny oval
of my mother’s youth in back and the rest is dark.
Sundays, the floor was black. At the beach, here
I’m a nest of seaweed, an earlier portrait of
surrealists I saw later, a stem of grey what
rises from my scalp. My hair is peaked in brine.
And this here hat, dark green fedora over same green
corduroy suit for a trip to the nation’s capitol,
how far askance I’ve been since and never another
hat. Cromium rods, the hand in the guide’s pocket
seems far removed. Blurry shoes on sandstone steps,
double and over exposed. Then in this one the SECRET
points to my head, shaved, and emblem, OPEN, striped
in “pirate” T-shirt and HERE IT IS. My elbow bent,
upright this time, behind a pole. I had yet to
enter at this snap the cavern beneath my sneakers.
To the right my soles protrude from beneath a boulder,
for I had trapped my mother and she asked Why.
Taken. Given. Flashlight brighter than my face,
another grotto, where the ball of twine, indirection,
gave out but we never got very far in, Connecticut.
I swim out of another cave in a further frame, cramped
gaze of sunlit days, apparel forgot. Later I reel
in a yell as my cousin takes a bite from my shank
beneath ranchhouse breezy curtains of Marion. On a trudge up
from the gasoline rockpit in the gaze of Judy Lamb,
she carries my pack, my jeans rolled as I step on
a pipe. Estwing in hand and svelte as only youthful can.
Most of those rocks remain and she married a so-so
clarinetist. My greygreen zipper jacket leans against
a concrete teepee, my father looking bullchested stands
before. Perhaps we had just argued. Central Park cement
steps of pigeons, the snow removed. Overexposed
whiteshirt at the drums, stick fingers ride cymbal
at the camera raised, livingroom Brenton with orange
& black “sea” wallpaper and orange&black tubs. I wore
a wristwatch then and never again, drumtime hitching
me past it. I graduate from highschool in white dinner
jacket and diploma and frown, too many hot shadows
back of the garage. Must roll up the bedroll with
skinny arms and lam for the caves. Dave & A. Bell by
the Ford Company Squire first time allowed alone to tool
Bleak grass scapes of Knox farm. Rope down a crack,
mosquitoes and Koolade, sun dapple leaf moss sandwiches, ache.
Then in this group more drums on the roof, the gravel
and the flat, a cover attempt for no album even thought.
I tap and step in the dim known street. Lean on a
chimney to inhabit the sky, deep with drops. Here
I’m pressed on a wall of Tennessee limes, stones-throw
from mouth of the underground we camped in. Too many
thoughts, elide. Then lie on a beach in a doughnut
pattern shirt with a stick, a pipe?, in my mouth as my
cousin grins shiny beyond. Truro, also waiting for the
caves. With the poets then I’m fat and the driveway is
dark, the clapboards all white in a day of all talk.
This then all ends in color, my red bandana and shirt out
on Devil’s Pulpit, open hand addressed to the grey
where Hawthorne and Melville now view of a highschool.
While the water still spills, and the cat squints at leaves
blown, my father wears Brahms, families lean in on one
for a group shot, and the rock remains shattered in a star.