I am still afraid to write in tablet what I know no one will read unless I die suddenly, mysteriously, family members if not police scanning notebooks for clues. He disappeared? Why? His car, in perfect working condition on a beautiful sunny day in on dry roads spun out and plunged off the Maryland 17 bridge over the Potomac? Why? The distraught few who wonder if I'd wrote in my many notebooks what they didn't see coming, who wonder if they'd only read what I am afraid to write in the notebooks they are reading for clues they think could have prevented the sudden end they think they should have seen coming. Nothing I won't write in tablets has anything to do with dying, what I won't write about in tablets, let me repeat, has nothing to do with dying, at least by my deliberate hands. It's because I think I'm invincible that I know I will die when I least expect too and am least prepared for, files meant to be erased unerased, notebooks meant to be burned unburnt. The issue is when I can no longer edit when I would wish to still be editing. Rather than decide whether I will write what I am still afraid to write, now, in this new tablet, I am instead thinking about all that I have written that needs to be deleted and/or burned in the event of my sudden, mysterious, disappearance and/or death.

What compulsion requires me to see in as false a published format as here the published sentences I won't post there? Will it be required I write anything typed here in tablet first? Will it be mandated that first drafts in tablet be typed first time here if first draft in tablet's typos? Failure already. United the past two years I always wrote first in tablet, now I write - until the new moleskin for this new blog tablet - exclusively by keyboard. Will I edit only by keyboard? If I edit by keyboard will I only edit by keyboard, never transferring content back to paper once typed and - I'm editing as I go - edited? If I do edit do I ever abandon editing? What if there is a line, a passage, a set piece I want to remove but not delete, where do I house it? If I place the displaced into the moleskin and edit must I keyboard each new edit, especially if the edit is to remove what I am afraid to write in tablet, and if I am afraid to write it in tablet why do I type it here where the chance of being read is, by technology alone, more likely. Why did I delete the previous sentence then insist on my need to publish it before hiding it? 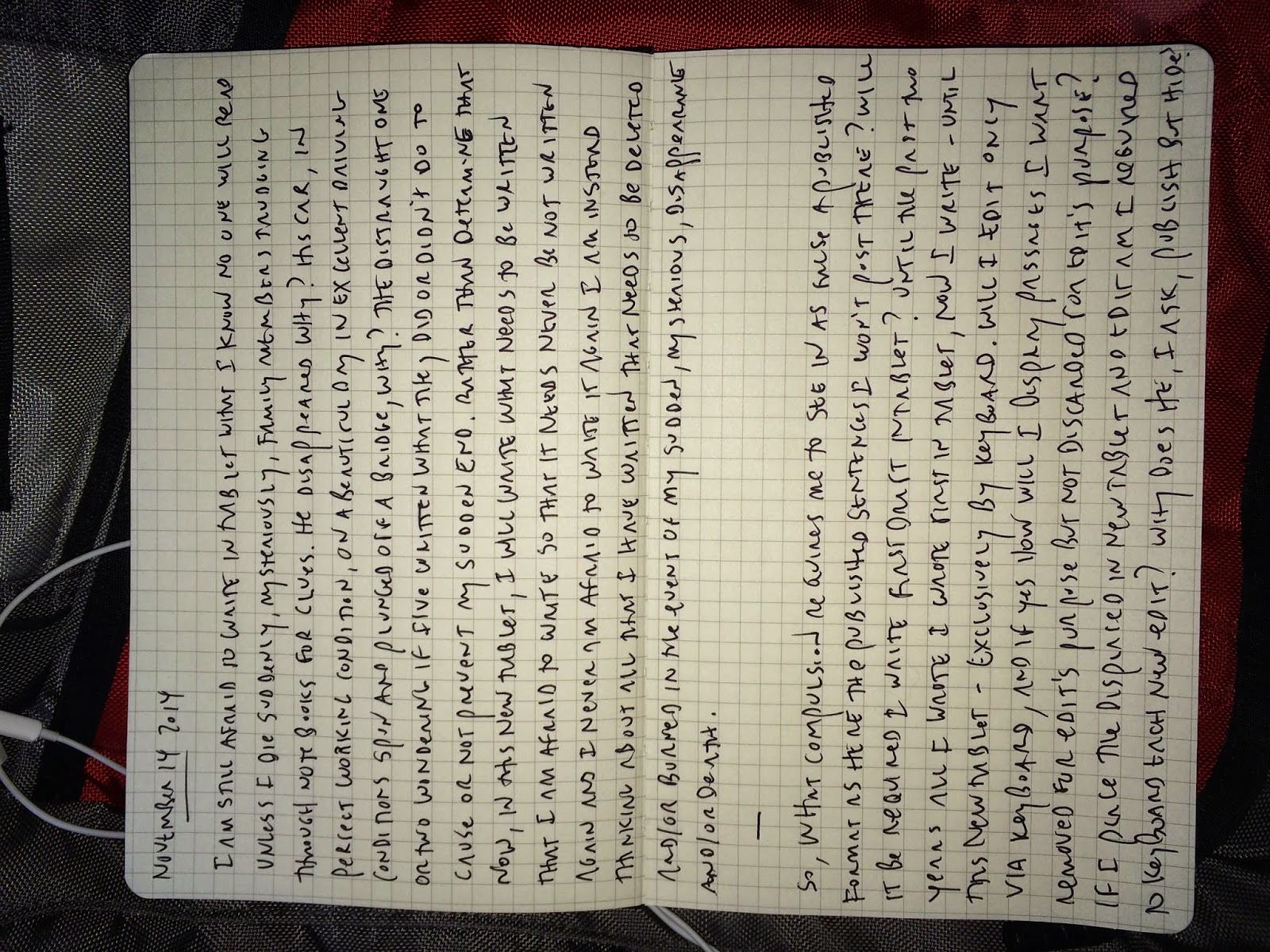