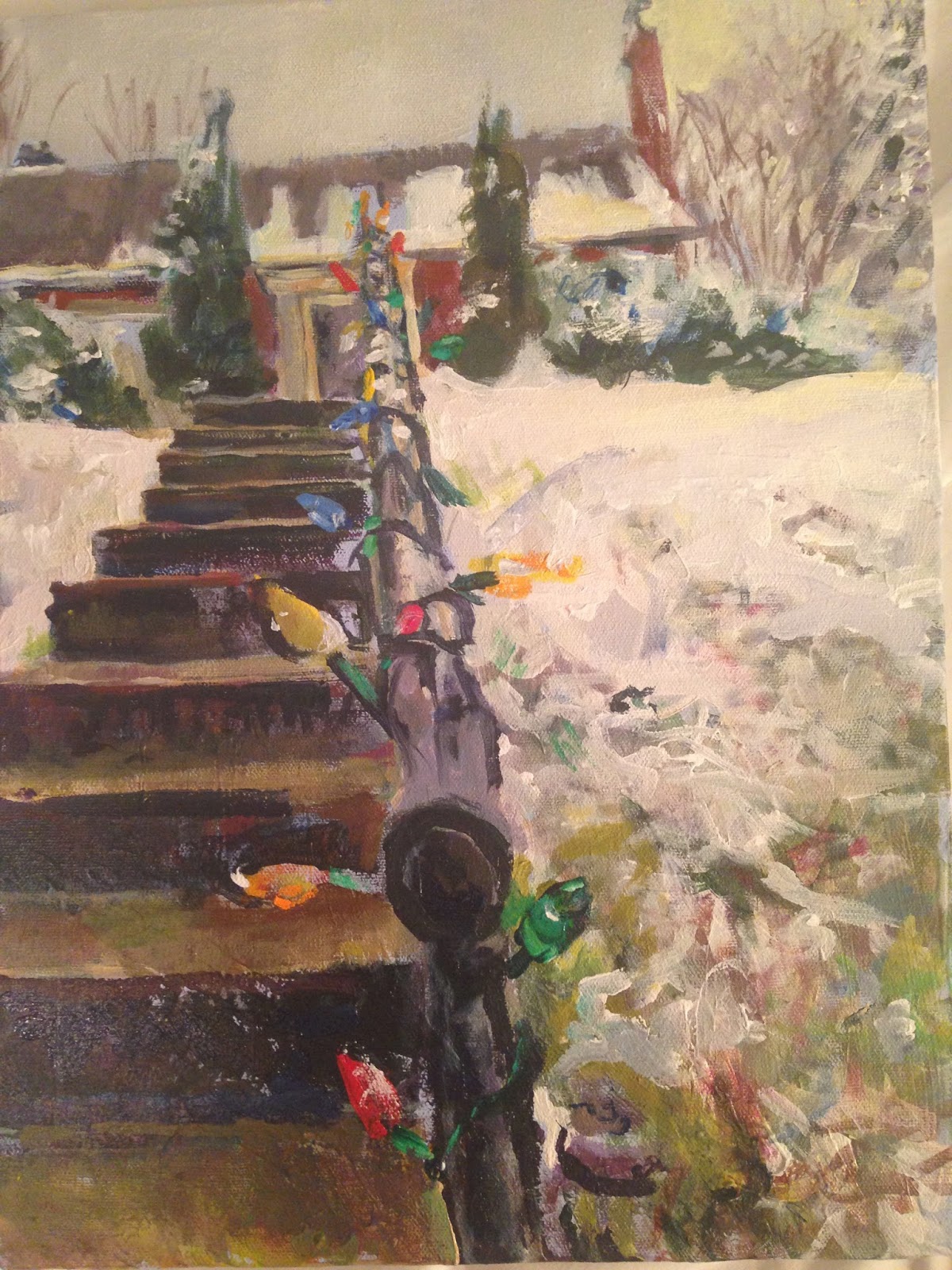 
Not our house, by the way, a neighbor's, though Earthgirl and Planet did Giftmas ours with electric bulbs on stair-rail too. Unrelated, every time I remember I look for new Will Oldham songs and news of tours. I looked yesterday. His tour dates are at Drag City. I got there by googling Bonnie Prince Billy, clicked on his page, clicked on tour and.... the page defaulted to this Spring's Six Organs of Admittance tour, Sunday April 26 at DC9, and I thought HOLY THE FUCK! Bonnie Prince Billy with Six Organs of Admittance (who have appeared on this shitty blog often over the years) opening! One person can vouch. He's the guy who found the below video with Ben Chasny (who is Six Organs of Admittance) on guitar. Though O fuck, no Will Oldham, but yes, I'll go seehear Organs of Admittance. $12. Let me know by a week from today if you want a ticket.

We here at Progressive Health would like to thank you
For being one of the generous few who've promised
To bequeath your vital organs to whoever needs them.


Now we'd like to give you the opportunity
To step out far in front of the other donors
By acting a little sooner than you expected,


Tomorrow, to be precise, the day you're scheduled
To come in for your yearly physical. Six patients
Are waiting this very minute in intensive care


Who will likely die before another liver
And spleen and pairs of lungs and kidneys
Match theirs as closely as yours do. Twenty years,


Maybe more, are left you, granted, but the gain
Of these patients might total more than a century.
To you, of course, one year of your life means more


Than six of theirs, but to no one else,
No one as concerned with the general welfare
As you've claimed to be. As for your poems—


The few you may have it in you to finish—
Even if we don't judge them by those you've written,
Even if we assume you finally stage a breakthrough,


It's doubtful they'll raise one Lazarus from a grave
Metaphoric or literal. But your body is guaranteed
To work six wonders. As for the gaps you'll leave


As an aging bachelor in the life of friends,
They'll close far sooner than the open wounds
Soon to be left in the hearts of husbands and wives,


Parents and children, by the death of the six
Who now are failing. Just imagine how grateful
They'll all be when they hear of your grand gesture.


Summer and winter they'll visit your grave, in shifts,
For as long as they live, and stoop to tend it,
And leave it adorned with flowers or holly wreaths,


While your friends, who are just as forgetful
As you are, just as liable to be distracted,
Will do no more than a makeshift job of upkeep.


If the people you'll see tomorrow pacing the halls
Of our crowded facility don't move you enough,
They'll make you at least uneasy. No happy future


Is likely in store for a man like you whose conscience
Will ask him to certify every hour from now on
Six times as full as it was before, your work


Six times as strenuous, your walks in the woods
Six times as restorative as anyone else's.
Why be a drudge, staggering to the end of your life


Under this crushing burden when, with a single word,
You could be a god, one of the few gods
Who, when called on, really listens?