The Deaf Men Nodded at the Blind Boy's Recognition 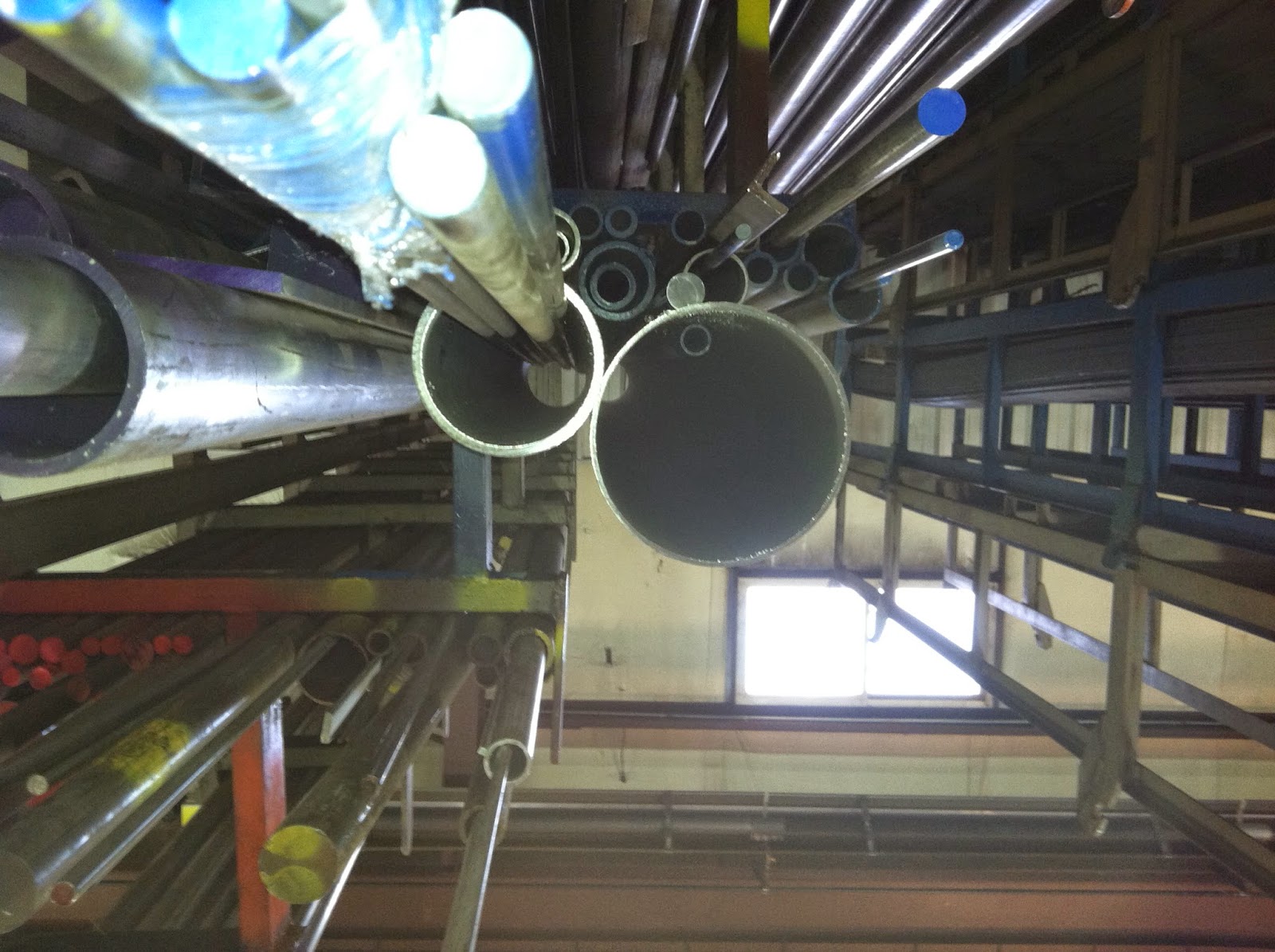 Planet's sophomore Fall semester in 2012 I drove out to help her buy and move iron from the iron store to her art building for a sculpture class. I love that trip. I knew there was a photo I was reminded of by Thursday's photo below of the sun through the windows early morning at my then temporary cubicle; I'm back in my new but same cubicle. The above photo taken in the iron store. Six days until the Highest Egoslavia Holy Day, and I get to see her before then! 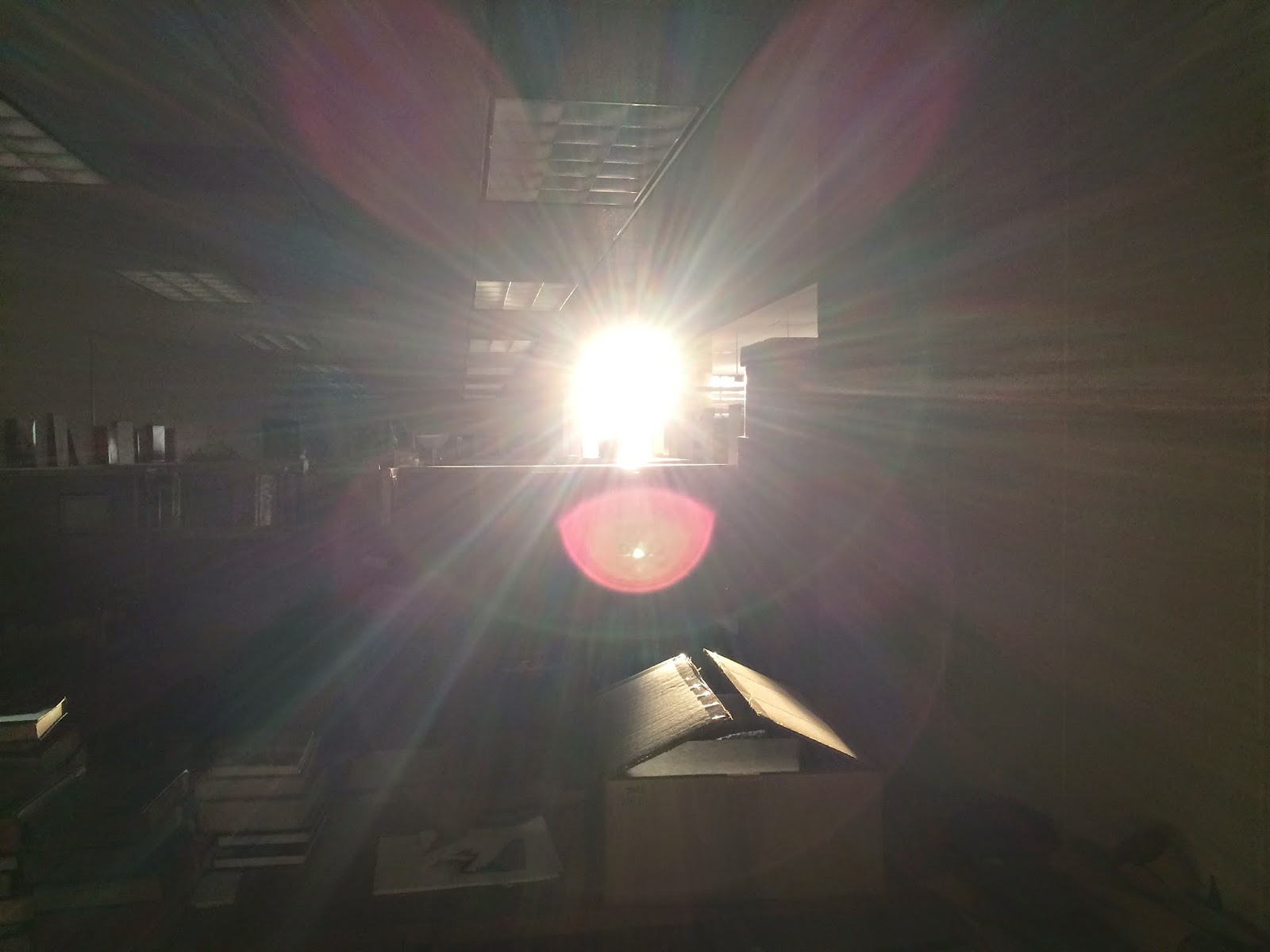 Bottles of blackness, this is true: yesterday afternoon a professor that just three days ago I spent fifteen minutes at his request talking about widgets and sprockets to make his pedagogical responsibilities easier to avoid walked into the gym while I was on an elliptical and looked me in the eye with no recognition. He got on the elliptical next to me for fifteen minutes, said excuse me when the sanitizer paper fell to the floor while he was wiping down the machine and broke my rhythm, didn't recognize me. Last evening, buying club soda in the Palisades Safeway, I stood behind a professor I've helped with widgets and sprockets to make her pedagogical responsibilities easier to avoid, she looked at me, I smiled, she smiled back with a total lack of recognition. I'm extraordinarily grateful. Is welcome kick in the nuts of a brazen blogwhore and attention slut to take one from real life to rattle home a more sensible and less dramatic if not a significantly better mood.

My deaf cousin had a hand in designing the Tomahawk Missile.
The blueprints open on his desk for what was to become
a show-and-tell-style reunion.


whose brother was your real father’s best friend,


and whose blind nephew appeared, shook my hand,
and, unprompted, said my name:—it was like a blessing.
The deaf men nodded at the blind boy’s recognition.


They held me captive, these two deaf friends, and took forever
with frantic mimicry explaining how they knew each other,
firmly guiding the silent dialogue toward the bizarre


intersection of fates: theirs, mine, my father’s, my mother’s....
The deaf find ways of contacting each other.
They have their on watering holes.


Did he place this decisive warhead above all other
constructions executed during a working life spent
gratefully, perhaps too gratefully, in the government’s


employ designing, mainly, destroyers...?
Final proof he was not handicapped by his handicap?
He married a deaf woman, but his two daughters


are normal; I mean not deaf.... Both were present
and married. One was pregnant. The other became
more and more voluble as this Sunday marathon wore on.


Conversation meant—: asking each other questions.
My cousin scribbled answers alongside the next question
on a pad that rustled like a pet hamster in his back pocket.


It was work, talking to that generation’s deaf.
It was hard not to raise your voice.
I caught my mother trying to catch my eye


with veritable strangers with whom I was linked
by blood, I wandered, coffee balanced in saucer,
toward my cousin’s study, in vain hope of tête-a-tête.


He followed, hauled down sheafs from shelves,
while I studied the framed sketches of ship’s interiors.
Had deafness helped him achieve these heights of invention?


His face brightened.   He strained with strangled voice to answer.
Even I could understand “That’s the ticket,”
before he scrawled with Bic on pad. “Deaf...can think better....”


I was about to say “Not all,” that I was asking
about him personally, when his daughter intervened
and said, aloud and in sign, that this was “deafism.”


He signed: “No no, not hearing forced me...”
She signed and spoke, indulgent, resigned, admiring:
“So deafness makes you superior?”


I liked the way she stood up to him, and the way he took it.
Trying not to sound like a boorish upstart in a Q & A
disingenuously grilling Oppenheimer, Einstein or Bohr


with how they felt about their elegant theorems
culminating in so much death, I asked if
he was ambivalent about designing warheads. Question


My stomach contracted: Oh God, what have I done?
It wasn’t me asking discomfiting questions to hound
this dear, sweet, ebullient man, who had done his best...;


it was my...duty to ask, which appeared to perplex
this...disembodied intelligence...schooled in
focusing on the problem to be solved just as


Husserl bracketed words, [postponed]
this longing to belong to sentences that mimicked
meaningful action, and to block out the politics and social


contexts that could...derail...the (beautiful) concord
between pure thought and necessity. He had the right to think:
Anyone can design a ship, or a missile, that works

like a bigger bullet shot from a bigger gun;


but to invent one that can stop, turn around,


She repeated the question in sign and came back
with: “My father doesn’t understand your question.”
I spoke more slowly. “You must feel proud at how


the Tomahawk conducted itself during the Desert War.”
The praise sent him rocking. So that’s what I took so long
to say! He nodded exuberantly in accord.


“Wait. Even though it was for a good cause
doesn’t it bother you that the missile
killed many people.” Question from left field.


Flurry of signs between father and daughter.
“My dad says war is horrible but once you’re in
it’s important to win.” “That was true before,


and true as it pertained to the two world wars,
but Southeast Asian...was another story.”
Groan of dismay. Why should a deaf engineer


be forced to deal with relative ethics too...? War
made the mental challenge of his work more
challenging, as it did the group holed up at Los Alamos.


The heart sinks when these higher mathematical formulations
become subject to weather, and the stray jackrabbits and homo sapiens
“who weren’t supposed to be anywhere near the test site...”


This pacific man could not have thought about what the Tomahawk
did to real live—now dead—people.
He was too immersed in the question of how


to get the missile to think, to take into account—the wind.

Email ThisBlogThis!Share to TwitterShare to FacebookShare to Pinterest
Labels: Brazen Blogwhoring and Attention Sluttery, If I Ever Kill This Fucking Blog This Is the Front Page I Want on the Blog's Tombstone, MSADI5G, Music, My Complicity, Poem