A Slipped Disc, and There Is Nothing More Painful 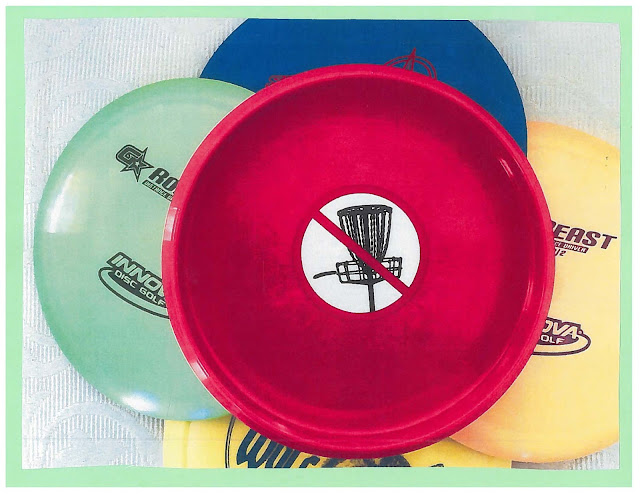 I have been using the same green 174 gram champ plastic Roc since 2005. Drivers change - now, for instance, I've a Leopard for straight (or as straight as I'm able) and anhyzer forehands, Sidewinder for distance and fade, Beast for hyzer forehands: none but the Beast have been in the bag more than three years. Putters/approach change - my pink/red Aviar w the Missing Low Is Lame sticker remains, but for short ups I've used Darts and Aeros too. The only midrange I've used for the past ten years is my favorite disc ever, my green 174 gram champ plastic roc. I left it on the course a weekend ago. Walked to disc three feet from basket, putted the Aviar, walked away from the Roc at my feet. What a stupid motherfucker. Discovered it missing this past Friday in the parking lot of Seneca. It wasn't in the bag. I tore my car apart looking for it. It had my name and email and phone number sharpied on the bottom, but of course whichever fucker picked it up and put in his or her bag won't contact me. I'm going to drive to the Park Office today and see if someone turned it in, a hopeless journey but one I need to make. (UPDATE: No one did. Fuckers everywhere. Fuckers.) I had a second roc - same weight, same plastic - in the second bag, but it's not broken in, hasn't had the fade knocked out of it by ten years of hitting trees and skimming off rocks. I rarely get bone-deep pissed off at myself. I am bone-deep pissed off at myself. I can't remember the last time I was so bone-deep pissed off at myself. Nothing pisses me off at myself more than being pissed off at myself. This past Friday I left myself thirteen twenty-footers when substitute Roc faded when old Roc would have parked. Yesterday I left myself fifteen twenty-footers when substitute Roc faded when old Roc would have parked. Each time, Fuck me. As always, fine metaphors abound.

She was in terrible pain the whole day,
as she had been for months: a slipped disc,
and there is nothing more painful. She


herself was a nurse’s aide, also a poet
just beginning to make a name for her
nom de plume. As with most things in life,


it happened when she was changing channels
on her television. The lucky man, on the other
hand, was smiling for the first time


in his life, and it was fake. He was
an aspiring philosopher of dubious potential,
very serious, but somehow lacking in


essential depth. He could have been
an adequate undertaker. It was not the first
time for either of them. It was a civil


service, with no music, few flowers.
Still, there was a slow and erratic tide
of champagne—corks shot clear into the trees.


And flashcubes, instant photos, some blurred
and some too revealing, cake slices that aren’t
what they were meant to be. The bride slept


through much of it, and never did we figure out
who was on whose team. I think the groom
meant it in the end when he said, “We never


thought anyone would come.” We were not the first
to arrive, nor the last to leave. Who knows,
it may all turn out for the best. And who


really cares about such special days, they
are not what we live for.

Email ThisBlogThis!Share to TwitterShare to FacebookShare to Pinterest
Labels: Aargocalyptic, About That Ceasing Seething, Autoblogography, Brazen Blogwhoring and Attention Sluttery, Disc, Fuck Me, James Tate, Music, My Complicity, My Inability to Shut the Fuck Up