Quick, If You Find It, Hide It 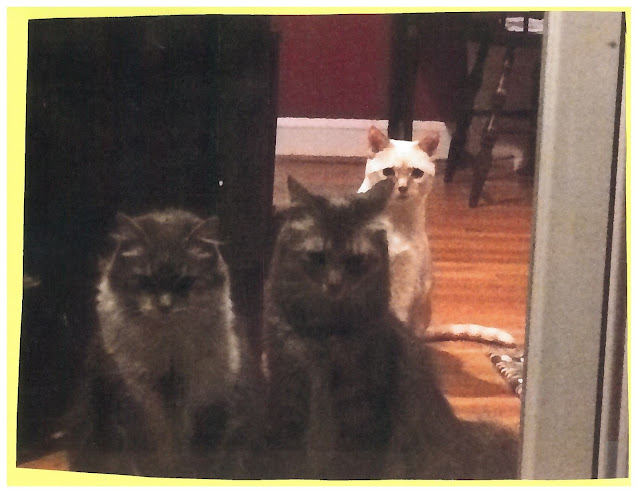 My evening welcome home committee. Earthgirl leaves the front door open, when I horn-honk my car doors locked Napoleon and MomCat and Frankie come running from wherever in the yard, Rosie (on the left), Stanley, and Fleabus come running to the door: this is the look they give me while I pet Napoleon, night after night. This photo taken this past weekend, could have been last night. Last night's greeting broke my bad mood.


What god was it that would open
earth’s picture book and see the two
of us on a road, snowfields glittering
on every side and poplars bent like
the fingers of an old man clutching
what he loved about the sun?
Which one was it that would peer
into our thatched, white-washed
farmhouse, and see the fur, flies,
and shit-stained walls? Which one
laughed at the barbed wire fences,
the wall topped with broken glass?
Which of the many who came then,
gleaming and rimed in hard sunlight?
Which of those who bobbed like ice
along the winter shore? What did
we have that any god would want?
Quick, if you can find it, hide it.

Email ThisBlogThis!Share to TwitterShare to FacebookShare to Pinterest
Labels: About That Ceasing Seething, Books, Brazen Blogwhoring and Attention Sluttery, Breaking Kayfabe, Death, Fuck Me, Music, My Complicity, My Inability to Shut the Fuck Up, Poem