Day of the Dead Hello 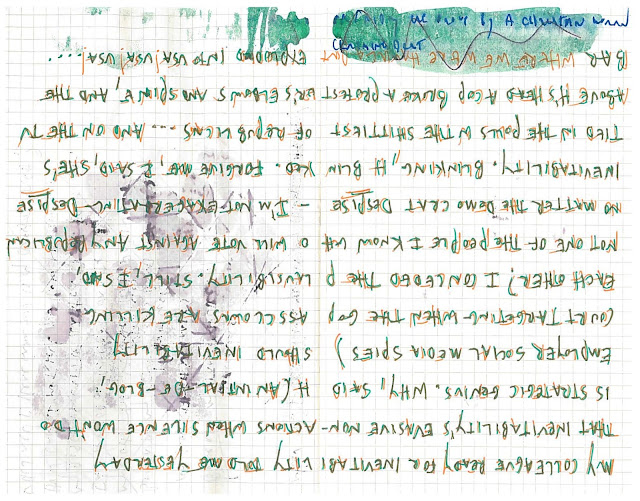 Reflection, not poem, on conversation I had over pints last night with my friend Ready for Inevitability, above posted because I wanted to see grid on new grid template. Ready for Inevitability, now tagged here as H, an initial-de-blog, motherfucking employer social media spies, said that Inevitability's evasive non-answers when forced to say anything and silence whenever possible is strategic genius. Why should Inevitability court targeting from GOP assclowns when GOP assclowns are targeting each other? I conceded the point. Still, I said, not one person I know who will vote against any GOP assclown no matter the Democratic candidate doesn't despise - I'm not exaggerating - despise Inevitability. Blinking, H blinked. On the bar TV above H's head a cop picked up a Ferguson protester and threw him to the ground like a wet stuffed animal, and the bar exploded in laughter, some fuck started chanting USA! USA! USA! and the rest of the bar joined in....


Nothing will hurt you that much despite how you feel
the stress on your back shapes your insight
this splendid November rain Toussaint. I find
you by your marks, he says
an imprint
But when I summon you, I talk to—I say—
my memory of your face. It’s kind of crazy
to others. They’re not very interesting he says.
When I first came to this country, and now
I know the language I say, but I had in a dream
spoken it many years previously. That is,
not the language of the dead the language
of France. I took one year of French in 1964
and then nothing but once, in 1977 I spoke French
in a dream all night: I was in the future I
moved here in 1992. Country of the more
logical than I? though the people of my quartier
know and like me, even as I a foreigner remain strange
You do everything alone a woman said to me.
There are ways to care without interfering
but the French speak of anguish frequently
they are conscious of emotional extremity
a terrible gift. It’s all a gift, he says . . .
some haven’t been opened. I’m not sure
he said that it’s nearly my sixty-seventh birthday
today though it’s the day of the dead hello
we love you they say.

Email ThisBlogThis!Share to TwitterShare to FacebookShare to Pinterest
Labels: About That Ceasing Seething, Books, Brazen Blogwhoring and Attention Sluttery, Cascade, Dead Blegsylvania, Fuck It, Fuck Me, Fuck This, Music, My Complicity, My Inability to Shut the Fuck Up, Poem