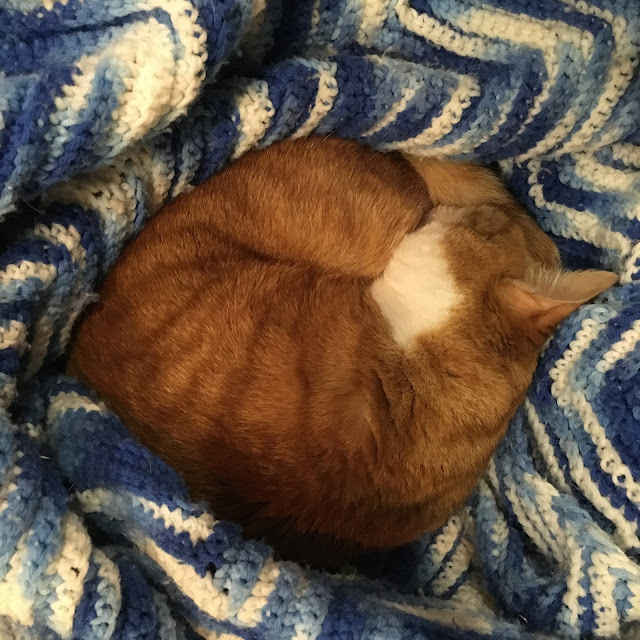 That's Jess, the unloved (but not hated) One of Eight. She's needy, offers nothing. The afghan is over fifty years old, crotcheted for me by my paternal grandmother.

Long-timer's can vouch - and typing the words John Roberts into the search box top left corner of blog and submitting will confirm - I've long desired Obama receive the duty of nominating a replacement of a conservative member of SCOTUS in POTUS season (to see who he would choose, as test of his - and his followers' - Liberalism*). His, of course, his 2012 reelection, but.

Snide me tapped out a twoot reflexively, thinking only I thought it funny: Yes, HRC's ruthless, will do ANYTHING to be Potus, but I have to admit killing Scalia NOW seems a good tactical move for lagging campaign. But it would be. Unless the focus isn't on social issues but oligarchal control of props of government, but that would take Obama nominating.... So yes, in Pragmatistan, it's good for Hillary Clinton.

Clinton yesterday: "If we broke up the big banks tomorrow….would that end racism? Would that end sexism?" "No!" crowd yells out. There you go.

UPDATE! Not everything is about an economic theory. There you go.

Deeply morbid deeply morbid was the girl who typed the letters
Always out of office hours running with her social betters
But when daylight and the darkness of the office closed about her
Not for this ah not for this her office colleagues came to doubt her
It was that look within her eye
Why did it always seem to say goodbye?


Holds her panting. Oh the creature
Oh the wicked virile thing
With its skin of fleck and shadow
Stretching tightening over him.
Wild yet captured wild yet captured
By the painter, Joan is quite enraptured.


Now she edges from the canvas
To another loved more dearly
Where the awful light of purest
Sunshine falls across the spray,
There the burning coasts of fancy
Open to her pleasure lay.
All alone, all alone
Come away, come away
All alone.


Lady Mary, Lady Kitty
The Honourable Featherstonehaugh
Polly Tommy from the office
Which of these shall hold her now?
Come away, come away
All alone.


The spray reached out and sucked her in
It was a hardly noticed thing
That Joan was there and is not now
(Oh go and tell young Featherstonehaugh)
Gone away, gone away
All alone.


She stood up straight
The sun fell down
There was no more of London Town
She went upon the painted shore
And there she walks for ever more
Happy quite
Beaming bright
In a happy happy light
All alone.


They say she was a morbid girl, no doubt of it
And what befell her clearly grew out of it
But I say she’s a lucky one
To walk for ever in that sun
And as I bless sweet Turner’s name
I wish that I could do the same.

Email ThisBlogThis!Share to TwitterShare to FacebookShare to Pinterest
Labels: Brazen Blogwhoring and Attention Sluttery, Dead Blegsylvania, Fuck Me, Futile Weekend Blogging, MSADI5G, Music, My Complicity, My Inability to Shut the Fuck Up