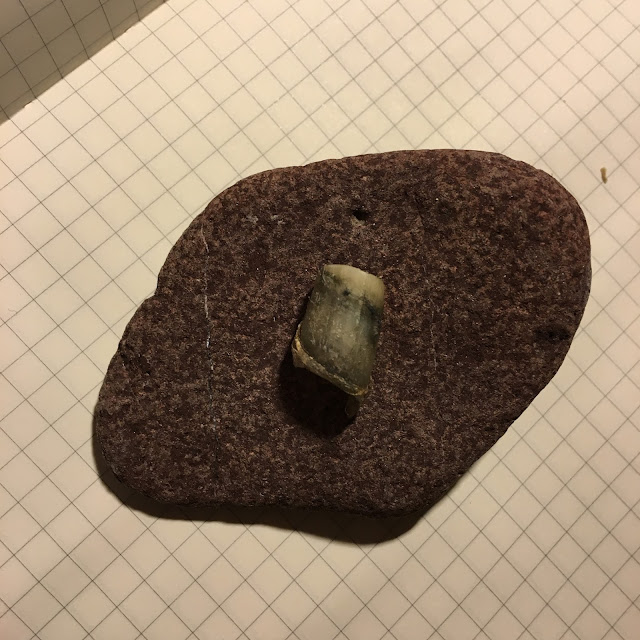 Digging through a drawer I normally don't last night - looking for something that should have been elsewhere, trying a space I knew that it wasn't - found the above, the nail off my left big toe that fell off weeks after I bashed it on a rock in a creek on the Nicholson Hollow Trail in Shenandoah National Park in the Summer of 2014. The rock it sits on is the one I had in my right hand as I got up from my fall. I texted the photo to Planet and Earthgirl: Earthgirl texted, Yuck. Planet texted, Wow, and added that Air was extremely impressed with the photo's composition (Planet and Air were on that hike, the first and last brutal Shenandoah hike they will ever). Earthgirl texted to Air's compliment: The fuck? Fine metaphors abound.


Driving down Second Ave. in a car
the frieze of my hand
like a grandmother
captured in an institution
I know I'll never live here again etc.
many many long years ago
Millions of peeps in the scrawl
the regular trees
the regular dog snort &
dig. In the West Village
you could put on a hat
a silly hat & it's clear
whereas over here
20 years passed
that rotting hat
it's loyalty to someone or something
that's really so gone
the moment clenched
like religion or government.
Wait a minute. I prefer
umm a beatle's cap
when it's really really old
neighborhood devoted to that.


Poetry is a sentimental act
everything spring she said
being surrounded by so much rot.
Pages & pages
mounds of them that I'm in
not some library but in your
little home, like you.
Every season I know I'm leaving
I'm as loyal as the cross
to this smeltering eccentricity
down by the river with Daddio
toss your ball in the river
in the future over bridges
they say you have to imagine
the 20th century. All these buildings were colored
a blasted interior
scarlet curtains rattling day
cobwebs on inexplicable machinery
a theater once dwelled here
all I see is rotting ideas
the epics I imagined
the unified cast of everyone
eating turkey together
on a stage
my idea
like waters towers popping up
feeling mellow
not exactly nothing all this time
but the buildings that are absolute
gone that I never
described. You can't kill
a poet. We just get erased &
written on. It aches in
my brain, my back
this beauty I'm eating my toast
everyone I knew you would
be dead tomorrow
& you were. The composing camera
infatuated with the shovel
on the lid & the pile
of rocks. He is not aging
same Alexandrian
blond in Bini-bons
the sirens are gods
when I lifted my head
from my swarming difficulty
You were so marvelous
bringing those toys to my feet
in between the invisibility of
the constant production & consumption
the network of that
& apart from the mold.
You survived.

Email ThisBlogThis!Share to TwitterShare to FacebookShare to Pinterest
Labels: About That Ceasing Seething, Autoblogography, Brazen Blogwhoring and Attention Sluttery, Dead Blegsylvania, Fuck Me, Futile Weekend Blogging, Music, My Complicity, My Inability to Shut the Fuck Up