Looking for a Place to Lay the Eggs of My Rebirth 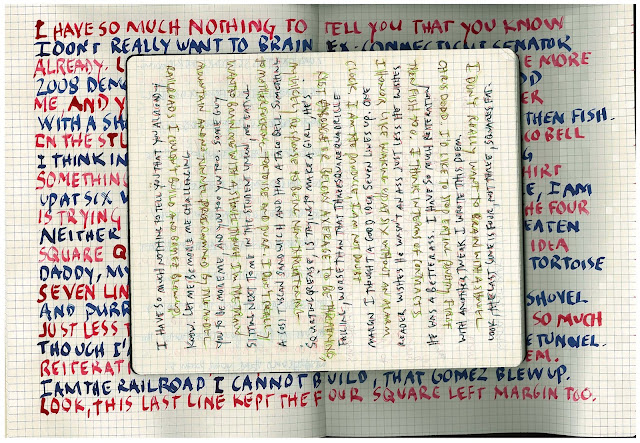 She's going to lose, said my avid Hillaryite Colleague. No, I said, she's not. Wait, she said, you've been saying...  I said, no one in America could lose to Trump but Hillary. She's the shittiest candidate ever, she deserves to lose, she'd lose to anyone but Trump, but she's not going to lose, she's running against the one person in America who can lose to Hillary. Really, HC said, perking up. Unless she loses the California primary next Tuesday and is indicted for her State emails Wednesday. Fuck you, HC said. I said, the election is five months away and we haven't begun to see the real weird yet. Why the fuck am I not enjoying this? Oh, right, HC said, have you broke your blogging boo-hoos yet? HC won something called a "Manhattan," and profuse thanks.


The fellow talking to himself is me,
Though I don't know it. That's to say, I see
Him every morning shave and comb his hair
And then lose track of him until he starts to care,
Inflating sex dolls out of thin air
In front of his computer, in a battered leather chair
That needs to be thrown out . . . then I lose track
Until he strides along the sidewalk on the attack
With racist, sexist outbursts. What a treat
This guy is, glaring at strangers in the street!
Completely crazy but not at all insane.
He's hot but there's frostbite in his brain.
He's hot but freezing cold, and oh so cool.
He's been called a marvelously elegant ghoul.

But with a torn rotator cuff, even an elegant fawn
Has to go through shoulder seizures to get his jacket on.
He manages spastically. His left shoulder's gone.
It means, in pain, he's drastically awake at dawn.
A friend of his with pancreatic cancer, who will die,
Is not in pain so far, and she will try
To palliate her death, is what her life is now.
The fellow's thinking to himself, Yes but how?
Riding a motorcycle very fast is one way to.
The moon and stars rapidly enter you
While you excrete the sun. You ride across the earth
Looking for a place to lay the eggs of your rebirth.
The eggs crack open and out comes everyone.
The chicks chirp, and it's begun, and it's fun.

You keep on writing till you write yourself away,
And even after—when you're nothing—you still stay.
The eggs crack open and out comes everyone.
The chicks chirp, the poems speak—and it's again begun!
Speaking of someone else for a change, not me,
There was that time in Stockholm when, so strangely,
Outside a restaurant, in blinding daylight, a tiny bird
Circled forever around us and then without a word
Lightly, lightly landed on my head and settled there
And you burst into tears. I was unaware
That ten years before the same thing had happened just
After your young daughter died and now it must
Have been Maria come back from the dead a second time to speak
And receive the recognition we all seek.

Email ThisBlogThis!Share to TwitterShare to FacebookShare to Pinterest
Labels: About That Ceasing Seething, Autoblogography, Birthdays, Brazen Blogwhoring and Attention Sluttery, Dead Blegsylvania, Fuck Me, Furs, MSADI5G, Music, My Complicity, My Inability to Shut the Fuck Up