Searching for Some Cairn or Chasm to Explain

From yesterday's hike, a four-miler up Norumbega Mountain in Acadia National Park. It's been years since I hiked in New England, most of the trails are old and were built before switchbacks became standard practice to avoid erosion. Steep ascents and descents. A mile of trail here equals three on Appalachian Trail in  Maryland, two on AT in Shenandoah, a mile and a half up and down the trails of the spine off the AT in Shenandoah. Uphill I'm good, I dig the uphill. Downhill takes sticks and strap-on knee-braces and post-hike naproxen.

Heights are 800-1200 feet depending (park and start at sea level), so it's not altitude that creates the tree line and the exposed tops of mountains that require cairns to mark trails. I imagine that wind and winter prevent all but scrub brushes and pines from growing on the peaks, but one hikes over bare granite along the crests - there are no trees to blaze, hence cairns to mark trail and indicate direction (the ends of each top rock on the cairn indicates the trail's direction).

At bottom of yesterday's descent we walked along a creek in a dense dark spruce forest. The black granite rocks are egg-shaped from millions of years of water carving, and the creek flowed over a solid granite bed which, where sun worked its way through the spruce, orange lichen (?) moss (?) grows. The photo below is undoctored - no setting beyond automatic on the camera. 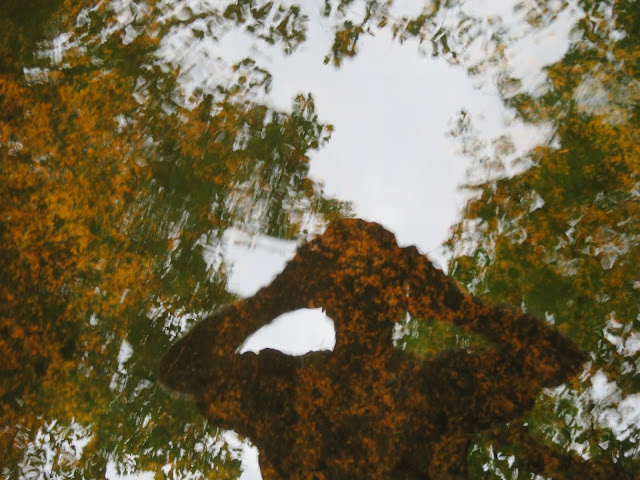 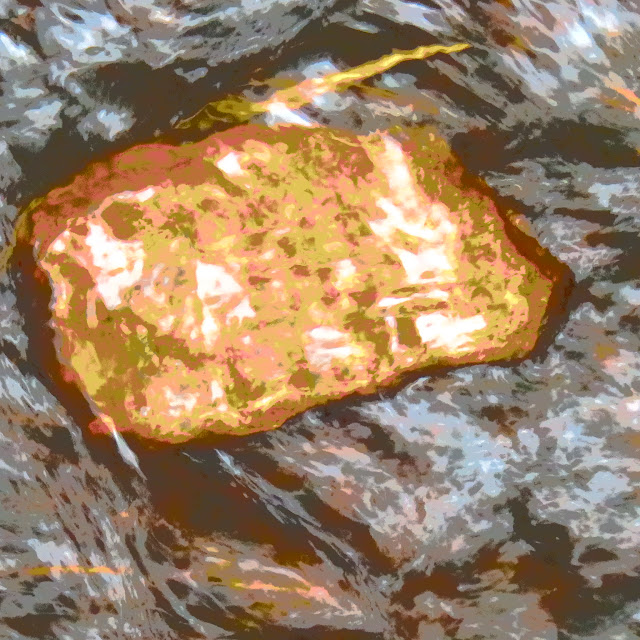 
The last two sherpas were the strongest,
faithful companions, their faces wind-peeled,
streaked with soot and glacier-light on the snowfield
below the summit where we stopped to rest.

The first was my body, snug in its cap of lynx-
fur, smelling of yak butter and fine mineral dirt,
agile, impetuous, broad-shouldered,
alive to the frozen bite of oxygen in the larynx.

The second was my intellect, dour and thirsty,
furrowing its fox-like brow, my calculating brain
searching for some cairn or chasm to explain
my decision to send them back without me.

Looking down from the next, ax-cleft serac
I saw them turn and dwindle and felt unafraid.
Blind as a diamond, sun-pure and rarefied,
whatever I was then, there was no turning back.

Email ThisBlogThis!Share to TwitterShare to FacebookShare to Pinterest
Labels: Aargh-free, About That Ceasing Seething, Brazen Blogwhoring and Attention Sluttery, Dead Blegsylvania, Fuck Me, MSADI5G, Music, My Complicity, My Inability to Shut the Fuck Up, Vacation 2016