The Subject May Hoard His or Her Bubbles 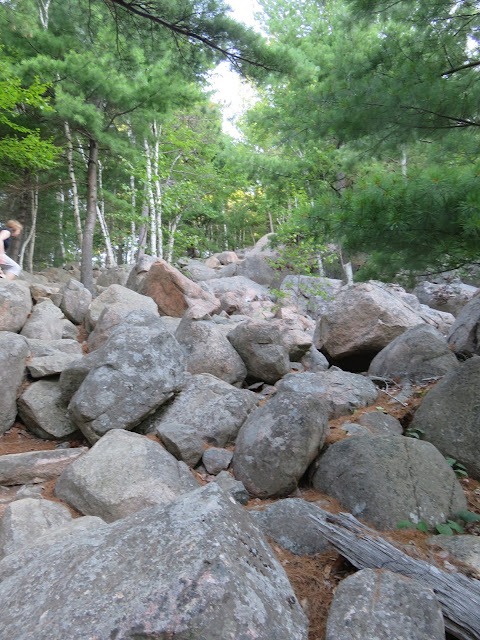 That's the trail to top of South Bubble -  we climbed both South and North Bubbles yesterday. Ascents in Acadia are rarely more than 1200 feet - South Bubble is only 800 - but the sense of accomplishment - and the reward at the top - is kaboom. We've been fortunate, by the way: quite by luck (guidebooks are for shit, the online trail descriptions are for shit) we've encountered the difficult, the hoisting ass over boulders, shimmying through crevices, hunching under tunnels, hauling 56 year old bodies upward on metal wrungs hammered into purchase-less granite, going uphill: doing these downhill would scare the fuck out of me. Maybe today. 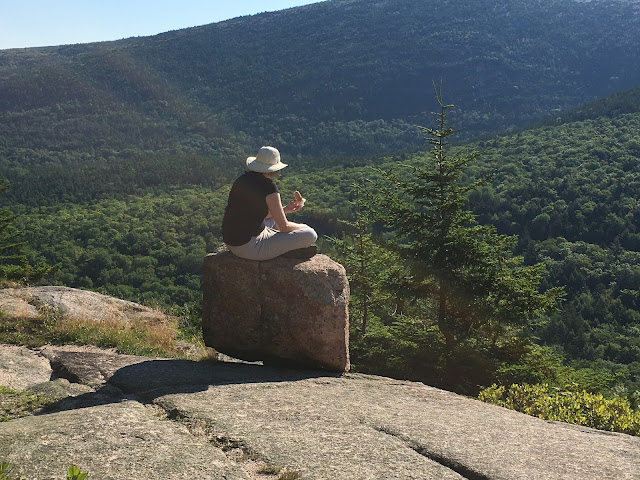 The bubbles - here's Earthgirl yesterday eating breakfast on one yesterday - are huge boulders that are glacial erratics - rocks carried by glaciers far from their place of origin and deposited as the glaciers retreated and melted. Here they are pink granite - the natural granite here is white.

Also, I could get very used to not going to work.

Also, I could get very used to this, the view, right now as I type this, to start every morning: 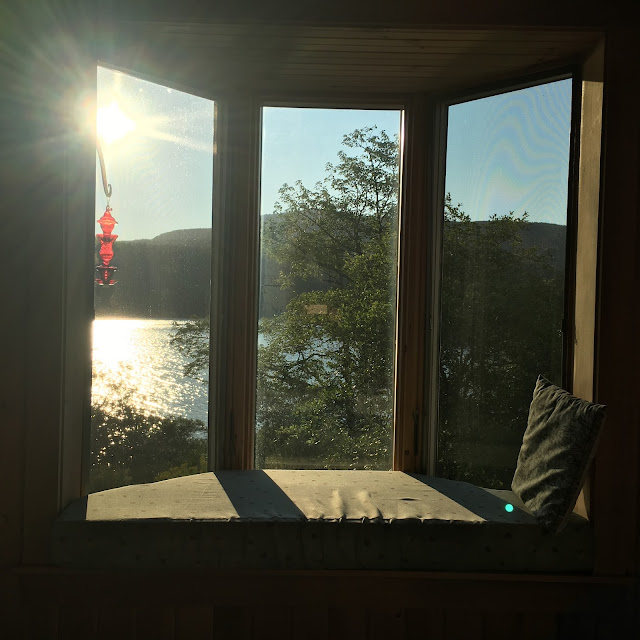 PITY THE BATHTUB ITS FORCED EMBRACE OF THE HUMAN FORM

1.
Pity the bathtub that belongs to the queen its feet
Are bronze casts of the former queen’s feet its sheen
A sign of fretting is that an inferior stone shows through
Where the marble is worn away with industrious
Polishing the tub does not take long it is tiny some say
Because the queen does not want room for splashing
The maid thinks otherwise she knows the king
Does not grip the queen nightly in his arms there are
Others the queen does not have lovers she obeys
Her mother once told her your ancestry is your only
Support then is what she gets in the bathtub she floats
Never holds her nose and goes under not because
She might sink but because she knows to keep her ears
Above water she smiles at the circle of courtiers below
Her feet are kicking against walls which cannot give
Satisfaction at best is to manage to stay clean

2.
Pity the bathtub its forced embrace of the whims of
One man loves but is not loved in return by the object
Of his affection there is little to tell of his profession
There is more for it is because he works with glass
That he thinks things are clear (he loves) and adjustable
(she does not love) he knows how to take something
Small and hard and hot and make room for
His breath quickens at night as he dreams of her he wants
To create a present unlike any other and because he cannot
Hold her he designs something that can a bathtub of
Glass shimmers red when it is hot he pours it into the mold
In a rush of passion only as it begins to cool does it reflect
His foolishness enrages him he throws off his clothes meaning
To jump in and lie there but it is still too hot and his feet propel
Him forward he runs from one end to the other then falls
To the floor blisters begin to swell on his soft feet he watches
His pain harden into a pretty pattern on the bottom of the bath

3.
Pity the bathtub its forced embrace of the human
Form may define external appearance but there is room
For improvement within try a soap dish that allows for
Slippage is inevitable as is difference in the size of
The subject may hoard his or her bubbles at different
Ends of the bathtub may grasp the sponge tightly or
Loosely it may be assumed that eventually everyone gets in
The bath has a place in our lives and our place is
Within it we have control of how much hot how much cold
What to pour in how long we want to stay when to
Return is inevitable because we need something
To define ourselves against even if we know that
Whenever we want we can pull the plug and get out
Which is not the case with our own tighter confinement
Inside the body oh pity the bathtub but pity us too

Email ThisBlogThis!Share to TwitterShare to FacebookShare to Pinterest
Labels: About That Ceasing Seething, Autoblogography, Books, Brazen Blogwhoring and Attention Sluttery, Dead Blegsylvania, Elkin, MSADI5G, Music, My Complicity, My Inability to Shut the Fuck Up