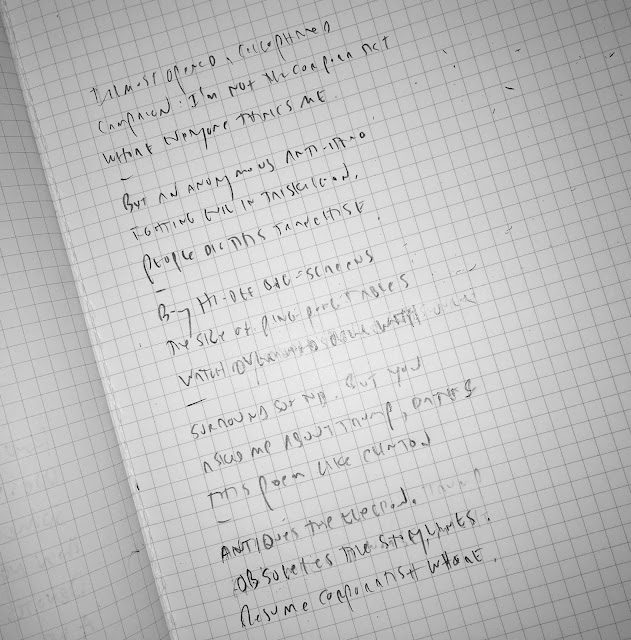 Just north of Brownsville, Pennsylvania, east side of the Monongahela, on Albany Road is a metal tunnel under railroad tracks. My dad and his sons honk horns inside driving to or from Republic and Fellsburg. The woman profiled as a Trump supporter in today's Washington Post lives in Brownsville.

The woman with the shitty hopeless life in Fayette County, her party greased the clusterfuck and feeds her her avenues of resentment, know what? My once-upon-a-time party does me too. Fuck me to mock that woman in Brownsville.


We were young and it was an accomplishment
to have a body. No one said this. No one
said much beyond “throw me that sky” or
“can the lake sleep over?” The lake could not.
The lake was sent home and I ate too many
beets, went around with beet-blood tongue
worrying about my draft card-burning brother
going to war. Other brothers became holes
at first base at war, then a few holes
Harleying back from war in their always
it seemed green jackets with pockets galore
and flaps for I wondered bullets, I wondered
how to worship these giants. None of them
wanted to talk to me or anyone it seemed
but the river or certain un-helmeted curves
at high speed, I had my body
and flung it over branches and fences
toward my coming sullenness as the gravity
of girls’ hips began and my brother
marched off to march against the war.
I watched different masses of bodies on tv,
people saying no to the jungle with grenades
and people saying no to the grenades with signs
and my father saying no to all of them
with the grinding of his teeth he spoke with.
I’d pedal after the nos up and down a hill
like it was somehow a rosary, somehow my body
was a prayer I could chant by letting it loose
with others like me milling around
the everything below five feet tall
that was ours, the everything below
the adult line of sight that was ours
to hold as long as we could: a year,
a summer. Until the quarterback came back
without . . . well, without. When the next Adonis
stepped up to throw the bomb.