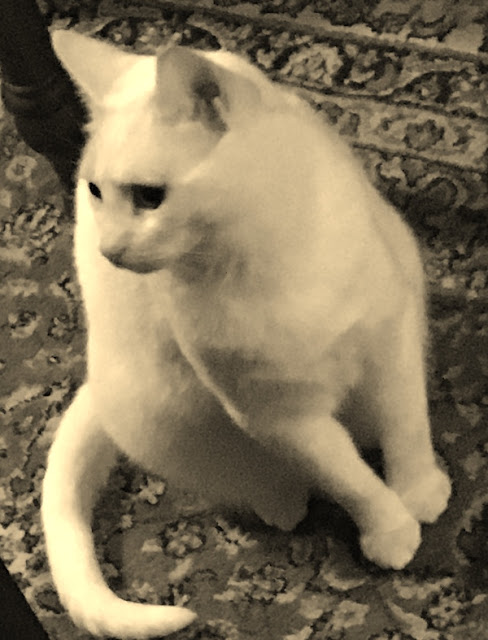 So for Giftmas we got Evilolive. Olivevil. Vote, I can't decide. Five days ago the #4 cat on My Sillyass Deserted Island Five Game morphed into a hissing, bullying asshole. Asshole. Rosie isn't sick, she's terrorized by motherfucking Olive. Stanley and Jess are hiding under the sofa as I type this, Evilolive Olivevil stalking them. Fleabus says fuck this, left-crossed EOOE (you can vote for that too), Napoleon right-crossed OEEO (another option). We brought MomCat in the coldest night last week, put her in our bedroom behind a closed door, its not a common cat area, it's away from where they feed, where they shit, and I didn't see any interaction between MomCat and Olive, we kept food and litter boxes separate, but total dynamics of the house have changed. Fine metaphors and fuck me, etc...

When the vet called yesterday to tell me Rosie's blood and shit work are clean, that she's perfectly healthy, I offered my MomCat theory and he called it entirely plausible if not provably probable. I asked if such personality conversions are common, and the vet said yes. I said, once these conversions happen how often do they reverse, and he said hardly ever. It occurs to me what a remarkable run of peaceable cats we've had, in all the years and all the cats of Earthgirl and me. If, as the vet says, this happens all the time how lucky we've been. The vet said I now have a cat who wants to be a solo cat, will most likely spend the rest of her life hissing at every other cat, but if she's ever an only cat will probably be the wonderful cat she was just a week ago.

Elric (who gave us Clover, #3 on My Sillyass Deserted Island Five Game of Cats), I've got a Giftmas present for you now that your apartment lets you have a cat.


Life with its sorrow, life with its tear.
And you know what that means:
the sky in a drawer,

the underwear underworld
on the floor of the moon.
Under the emergency lamps a small panic was growing,
keeping to itself, chiming
ahead of your headlights, wobbly.
You had just gotten so young
it was all I could do to contain you
in the linen dishtowel we kept for that purpose.
The doctor prescribed bed rest.

The cash cow is a going concern,
the intake not dangerous enough
that you folks enjoy.

It’s not immortality,
these mechanical trees, alders.
Good to know you’re not killing them all yourself
across the street baby.

Email ThisBlogThis!Share to TwitterShare to FacebookShare to Pinterest
Labels: Aargocalyptic, Brazen Blogwhoring and Attention Sluttery, Dead Blegsylvania, Fuck Me, MSADI5G, Music, My Complicity, My Inability to Shut the Fuck Up, Olive