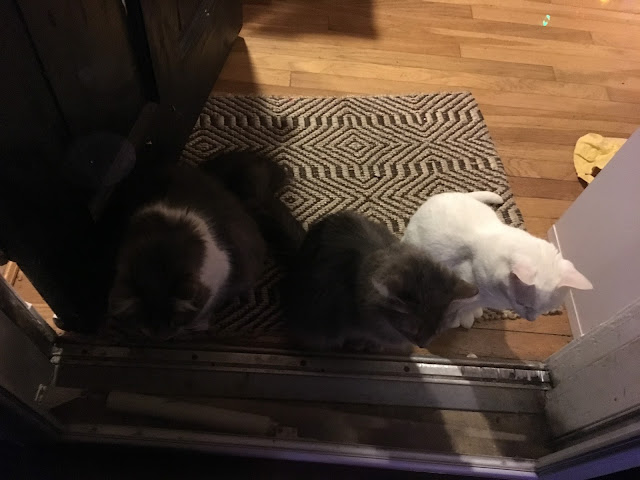 Left to right, Rosie, Stanley, Olive, two nights ago. I am never more surveilled then when I'm on front stoop paying attention to MomCat and/or Napoleon. Except here, twitter, email, cell phone, etc. Come get me, Copper.

This is a good post. This post gives truly quality information. I’m definitely going to look into it. Really very useful tips are provided here. Thank you so much. Keep up the good works http://www.locksmithlasvegas4u.com/

when someone and/or someone's bot in Indonesia (working for a Las Vegas locksmith?) latched onto that post with this video, the best joke ever:

But look at the comments at that post: I know what happened to Randall - according to Prunella, who works with him, he unplugged the digital and then went Angry White Trump. The fuck?

But whatever happened to anne? I still have readers in Ontario, but not the town she once pinged me from. Are you still here, anne? Damn.


ON THE PERIPHERIES OF THE IMPERIUM

Perhaps I make too much of it, that time,
Eldon Axle, brake plates dipped
in some sort of liquid to protect them from
dust, dirt, metal chips the grinding caused —
that time, night shift, press-machine shop
on Outer Drive, rolls of stainless steel put in,
fixed up, because the work you do is around fire
your cuticles burn if the mask’s not on right.

When the mind is clear, to hear the sound
of a voice, of voices, shifts in the attitude
of syllables pronounced. When the mind
is clear, to see a Sunday, in August, Shrine
of Our Lady of Consolation, Carey, Ohio,
at a holy water font, a mother washes
her six-year-old’s fingers crushed in an accident
so that they’ll heal.

So what percentage of Weasel Boy’s DNA
do you think is pure weasel? Tooth-twisted,
Yeats’s weasels, in “Nineteen Hundred
and Nineteen,” fighting in a hole.

Conflated, the finance vectors, opaque
cyber-surveillance, supranational cartels,
in the corporate state’s political-economic singularity
the greatest number of children
in United States history are, now, incarcerated,
having been sentenced by law.

A comic dimension to it, on this F train
to One Hundred Sixty-Ninth Street
in Queens? He doesn’t want to disturb you,
but, see, he was stabbed in the face
with an ice pick, he lost his left eye —
lid pried open with thumb and forefinger —
here, look, he’ll show you —
a white-and-pink-colored iris.

Email ThisBlogThis!Share to TwitterShare to FacebookShare to Pinterest
Labels: Autoblogography, Brazen Blogwhoring and Attention Sluttery, Dead Blegsylvania, Fuck Me, MSADI5G, Music, My Complicity, My Favorite Post Ever, My Inability to Shut the Fuck Up, Robert Ashley