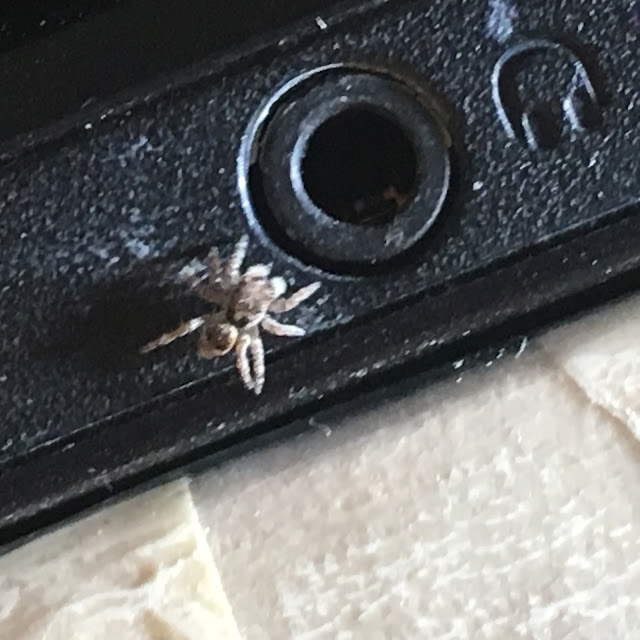 Spider crawled up bookshelf and onto and over a cardboard shoebox of casettes and then across dead laptop asking only for music as I type this sentence. Walked completely around the headphone-jack, would stick a leg in then back off. Spider stayed there until I went to sleep, is gone, now, in morning. Fine metaphors abound.

Why did I post that photo at this but not this there?


In edges, in barriers the tonal light of t
the one thing removed overemphasizes tonally
and you could hurry it, and it vanish and plan

You go out on an avenue, but may be taken in despite
your chordal list of hates, overcomings banished ready
receiving you from a darkened cone, the one a beat
behind the one you there are

Then the I not part of the you equation, but the
spider trying to build where it is written
vibrates tentative
I don’t want to talk to you about it anymore
crystal region in its light, there are failures and
there are failures

But it’s imperative, abrupt catch, that you sink the
final catch, trounced morning
this is awful but none other available, words reach
and visually fail to tie audibly retire
the pieces of the opening collision, and the reaches of
turning aside remind

Email ThisBlogThis!Share to TwitterShare to FacebookShare to Pinterest
Labels: A Friend Asked Me About My Poetry, Brazen Blogwhoring and Attention Sluttery, Dead Blegsylvania, Fuck Me, Futility, MSADI5G, Music, My Blindness, My Complicity, My Inability to Shut the Fuck Up