One Is Not Necessarily Discord on Earth 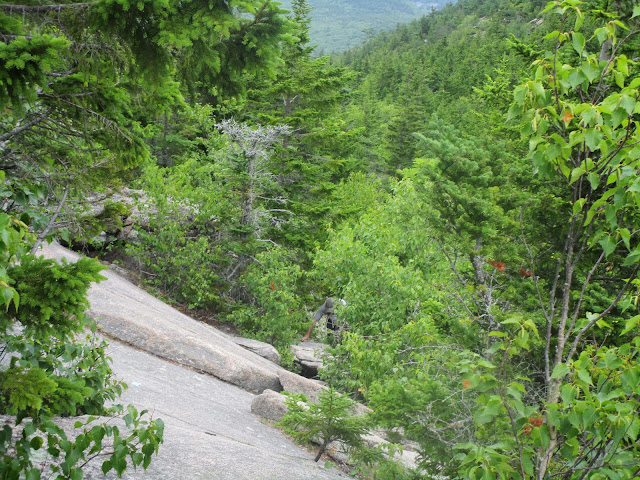 Gorge Trail, runs from Loop Road to saddle between Dorr and Cadillac Mountains, is an amazing feat of trail building. 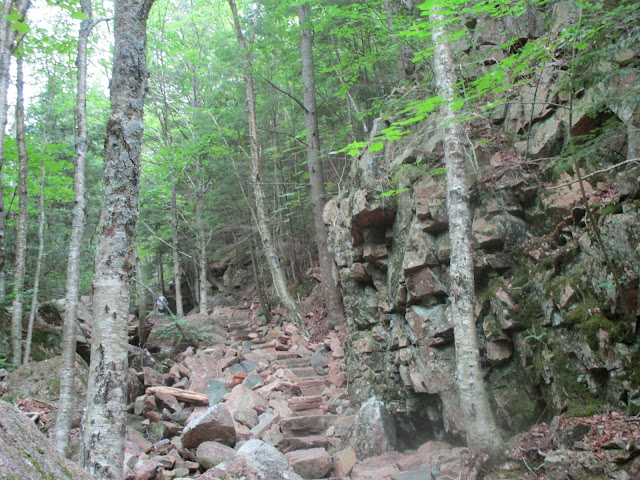 Today our last in Acadia. We're gonna Sargent Mt, Gilmore Peak, and Parkman Mt. Beyond end of vacation blues themselves, it ends just as I'm gaining confidence in my footing on difficult trails - I have poor balance to start, and what eyesight I've lost is at the bottom of my field of vision. Just gaining unconscious knowledge of when to use the left foot instead of the right for this leap, the right instead of the left for this blind lift takes me days. I lost what I learned last year, just felt it coming back yesterday. I've got good wind, I can go forever, my arms and legs are strong, and now that I can do that two foot hoist or slide down that four foot chasm on my ass without thinking twice, we're almost done. I wrote this last year, probably. I'll write this next year, probably. 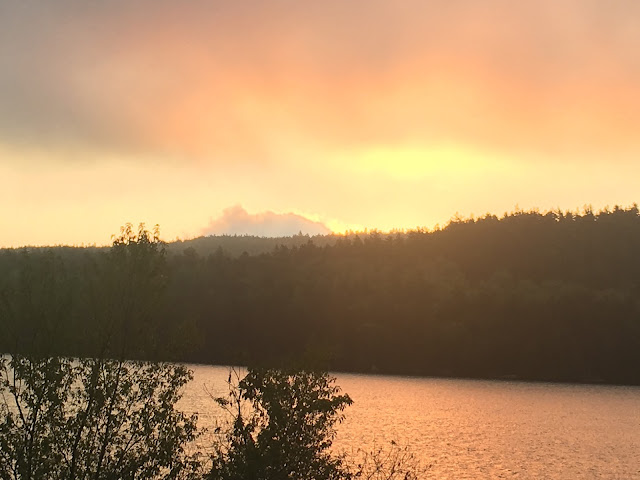 
The blue jay scuffling in the bushes follows
Some hidden purpose, and the gust of birds
That spurts across the field, the wheeling swallows,
Has nested in the trees and undergrowth.
Seeking their instinct, or their poise, or both,
One moves with an uncertain violence
Under the dust thrown by a baffled sense
Or the dull thunder of approximate words.
On motorcycles, up the road, they come:
Small, black, as flies hanging in heat, the Boys,
Until the distance throws them forth, their hum
Bulges to thunder held by calf and thigh.
In goggles, donned impersonality,
In gleaming jackets trophied with the dust,
They strap in doubt – by hiding it, robust –
And almost hear a meaning in their noise.
Exact conclusion of their hardiness
Has no shape yet, but from known whereabouts
They ride, direction where the tyres press.
They scare a flight of birds across the field:
Much that is natural, to the will must yield.
Men manufacture both machine and soul,
And use what they imperfectly control
To dare a future from the taken routes.
It is a part solution, after all.
One is not necessarily discord
On earth; or damned because, half animal,
One lacks direct instinct, because one wakes
Afloat on movement that divides and breaks.
One joins the movement in a valueless world,
Choosing it, till, both hurler and the hurled,
One moves as well, always toward, toward.
A minute holds them, who have come to go:
The self-defined, astride the created will
They burst away; the towns they travel through
Are home for neither bird nor holiness,
For birds and saints complete their purposes.
At worst, one is in motion; and at best,
Reaching no absolute, in which to rest,
One is always nearer by not keeping still.

Email ThisBlogThis!Share to TwitterShare to FacebookShare to Pinterest
Labels: About That Ceasing Seething, Acadia 17, Brazen Blogwhoring and Attention Sluttery, Fuck Me, MSADI5G, Music, My Blindness, My Complicity, My Inability to Shut the Fuck Up
Newer Post Older Post Home