Assume the Frigid Shapes of Silence and Build New Winters 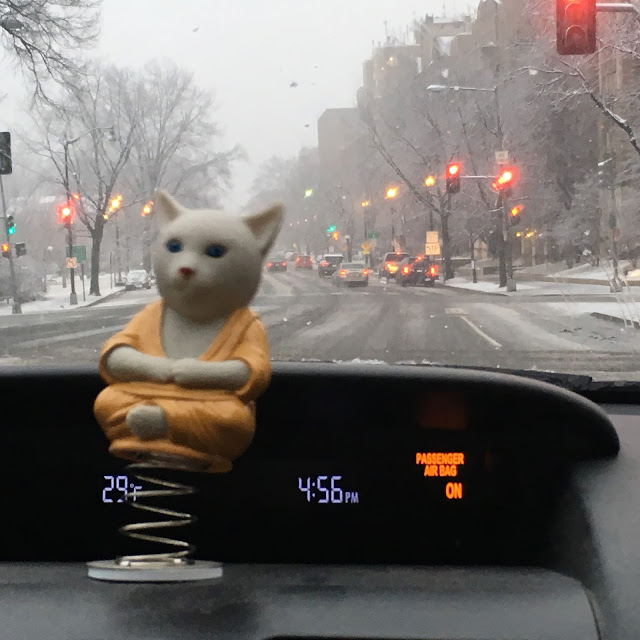 Earthgirl, Planet, and I were treated to dinner last night in West End, was snowing on way down, photos from passenger seat by Earthgirl, who gave me bobbing Olive two giftmases ago. Photo one taken Cathedral Heights, two and three Glover Park and Georgetown respectively.

Mocomofos, Rasika is excellent Indian, though I don't know it's worth making reservations months in advance (required): our friends grabbed 530 February 17th back in early November - it was the first available opening.

Think I saw, from across a large room, the Treasury Secretary. Judging from the suited hulks hovering nearby, probably. I doubt he needed make his reservation in November. I glared at him, observed only by the hulks, over my sweet potato samosas. Revolution! 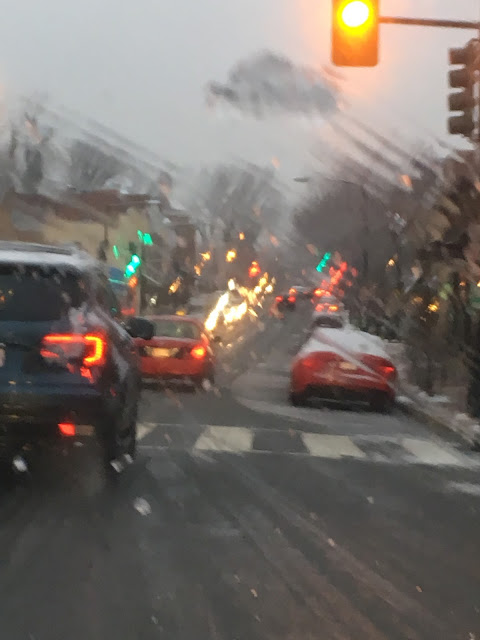 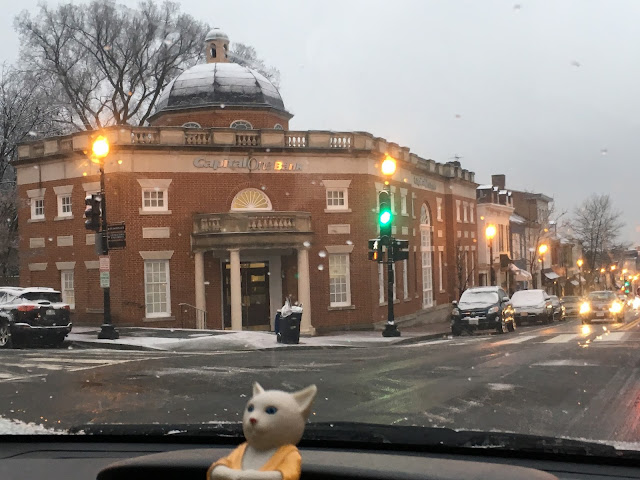 Directed by the eyes of others,
Blind to the long, deceptive voyage,
We walked across the bridge in silence
And said “Goodnight,” and paused, and walked away.
Ritual of apology and burden:
The evening ended; not a soul was harmed.

But then I thought: we all are harmed
By the indifference of others;
Being corrupt, corruptible, they burden
All who would vanish on some questioned voyage,
Tunneling through the longest way away
To maps of bitterness and silence.

We are concerned with that destructive silence
Impending in the dark, that never harms
Us till it strikes, washing the past away.
Remote from intrigues of the others,
We must chart routes that ease the voyage,
Clear passageways and lift the burden.

But where are routes? Who names the burden?
The night is gifted with a devious silence
That names no promises of voyage
Without contagion and the syllables of harm.
—I see ahead the hands of others
In frantic motion, warning me away.

To pay no heed, and walk away
Is easy; but the familiar burden
Of a later time, when certainties of others

Assume the frigid shapes of silence
And build new winters, echoing harm,
May banish every passageway for voyage.

You knew before the fear of voyage,
You saw before the hands that warned away,
You heard before the voices trained to harm
Listeners grown weak through loss and burdens.
Even in city streets at noon that silence
Waited for you, but not, you thought, for others.

Storms will break silence. Seize on harm,
Play idiot or seer to others, make the burden
Theirs, though no voyage is, no tunnel, door, nor way.

Email ThisBlogThis!Share to TwitterShare to FacebookShare to Pinterest
Labels: Brazen Blogwhoring and Attention Sluttery, Dead Blegsylvania, Fuck Me, Futile Weekend Blogging, Kate Bush, Kees, MSADI5G, My Blindness, My Complicity, My Inability to Shut the Fuck Up