From Any Point on the Periphery, Advancing Always Toward the Body 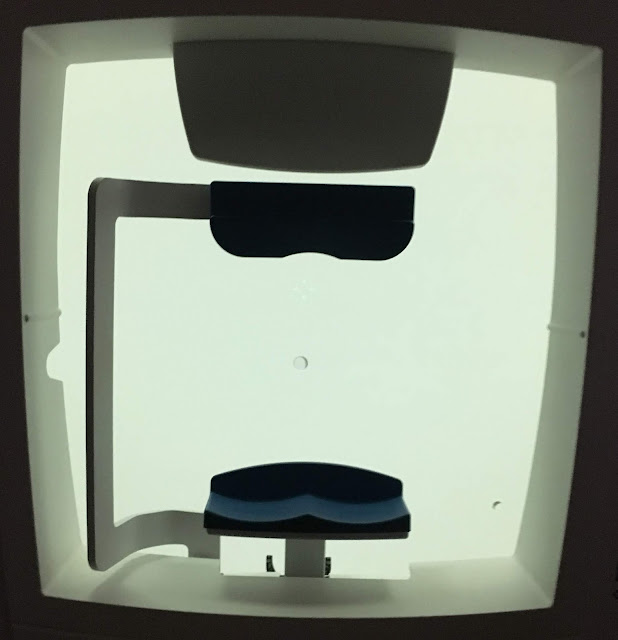 
I
In heaven there is no more sea, and houses no longer need a widow’s
walk. And no more widows, there being neither marriage nor giving
in marriage. How the air hangs lower and lower on this—I hope
—hottest day of summer. A faintly rotten scent the ground gives off
brings to mind lilacs that have budded and blossomed. There are no
more blossoms, perfume and purple gone for a year, as if forever. In
heaven there are no tears, salt water wiped away entirely. One moment
I breathe contentment. And then unreasoning sorrow pulses through
me, an imperfect tension, as if unending. I have time on my hands. In
heaven there is no more dusk, dark, dawn, meridian. And what I know
now and for certain: neither the day nor the hour.
II
It seems clear enough that there is in the brain a particular pain-center,
where sensations of every variety check in, to emerge as anguish and
hurt. Thus there is not, as we might suppose, a multiplicity of pains,
like an arsenal deployed against us, but one pain which puts on, as in a
ritual theater, different masks.
It need not, even, be a great number of masks, some few faces
peopling an endless repertory. From one fairy tale to another, is not
the witch the same witch, whether poisoning an apple or fattening the
children?
III
The doctrine changes, blows here and there, hot, cold. One more
notion sweeps across the state in gusts, fiercely at first, settling then
into a mild rotation. It puts things in motion. It dies down, while
pressure somewhere else is building.
Called to, across a chasm of thin air, I shape the air to answer. My
moments force themselves apart.
Breathe out. Breathe in. But as long as you are alive, there is a dead
space in your lungs, never emptied, never needing to be filled. The spirit
there, stale and sustaining, holds open every possibility, urging none. Ghost
money: money to burn.
IV
On the earliest known sundial, the finger of shadow moves through
symbols of the cosmos, but there are no lines drawn to mark off the hours.
It does not, in the modern sense, “keep” time, but celebrates its flight, its
recurrence, its brightness.
V
Hermaphrodite, sleeping. Predominance, in the visible, of the right hand
—but the eyes now closed. What could there be to dream about, for one
already complete? A perfect asymmetrical stability. No need to see or even
to look.
To know, without having to ask. From any point on the periphery,
advancing always towards the body. Both sexes. And both asleep.
VI
A scream from outside broke our argument and I ran to the door, rushed
out onto the sidewalk almost, I thought, before the scream had ended. The
night sky, above the street lamp, had a sheen of some dark metal.
Sirens—which seemed this evening more frequent than usual, and
more strident—state the theme, you have said, of our instant: the howl
of a machine hurrying to disaster. And all day, in the violence of delivery,
ordinary trucks rattle our sashes.
The street lay empty, mercury lit, silence giving us no indication of
which way to turn.
Posted by BDR at 7:44 AM

Email ThisBlogThis!Share to TwitterShare to FacebookShare to Pinterest
Labels: Abandon the Fuck, Autoblogography, Brazen Blogwhoring and Attention Sluttery, Dead Blegsylvania, Fuck Me, Lambchop, MSADI5G, My Blindness, My Complicity, My Favorite Post Ever, My Inability to Shut the Fuck Up