Rustling in the Azaleas 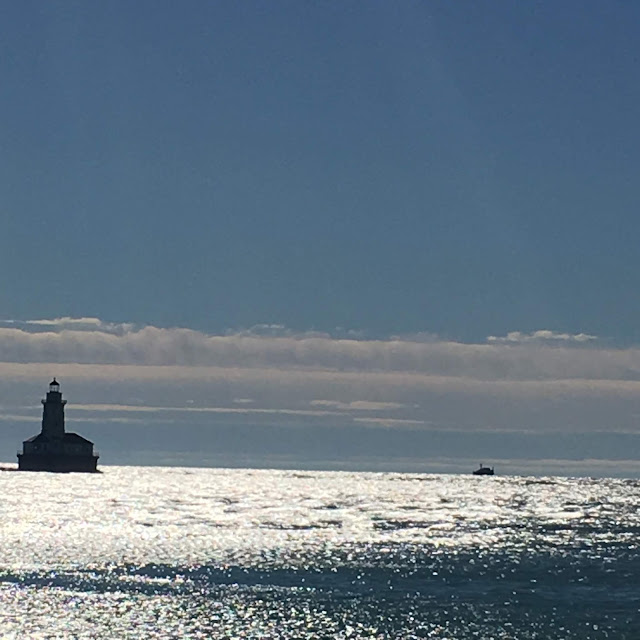 Last photo from this trip to Chicago (because there will be more trips to Chicago, and soon) from the end of the Navy Pier, I had three hours to walk Chicago Sunday morning by myself, lordy.

Because the world continued while I was ignoring it:
First photo from home last night, I got out of my car and called for Napoleon, he came running and screaming from the backyard, and while we were away our azaleas go kaboom: 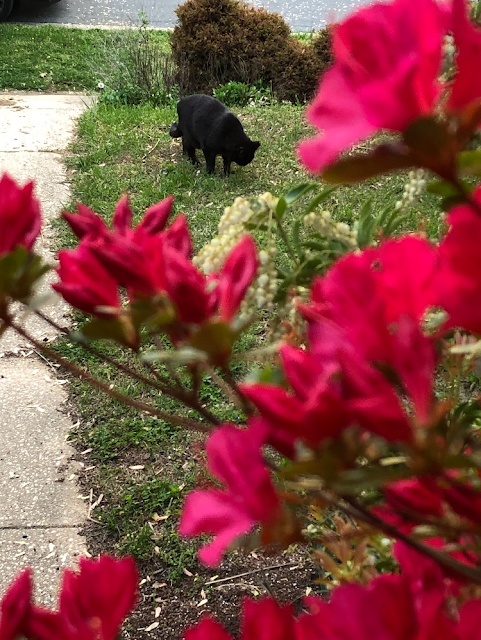 
Stare hard enough at the fabric of night,
and if you're predisposed to dark—let’s say
the window you’ve picked is a black
postage stamp you spend hours at,
sleepless, drinking gin after the I Love
Lucy reruns have gone off—stare
like your eyes have force, and behind
any night’s taut scrim will come the forms
you expect pressing from the other side.
For you: a field of skulls, angled jaws
and eye-sockets, a zillion scooped-out crania.
They’re plain once you think to look.
You know such fields exist, for criminals
roam your very block, and even history lists
monsters like Adolf and Uncle Joe
who stalk the earth’s orb, plus minor baby-eaters
unidentified, probably in your very midst. Perhaps
that disgruntled mail clerk from your job
has already scratched your name on a bullet—that’s him
rustling in the azaleas. You caress the thought,
for it proves there’s no better spot for you
than here, your square-yard of chintz sofa, hearing
the bad news piped steady from your head. The night
is black. You stare and furious stare,
confident there are no gods out there. In this way,
you’re blind to your own eye’s intricate machine
and to the light it sees by, to the luck of birth and all
your remembered loves. If the skulls are there—
let’s say they do press toward you
against night’s scrim—could they not stare
with slack jawed envy at the fine flesh
that covers your scalp, the numbered hairs,
at the force your hands hold?
Posted by BDR at 8:50 AM

Email ThisBlogThis!Share to TwitterShare to FacebookShare to Pinterest
Labels: About That Ceasing Seething, Birthdays, Dead Blegsylvania, Fuck Me, Futility, MSADI5G, My Blindness, My Complicity, My Inability to Shut the Fuck Up, Napoleon