As Good as Rocks

Done with Marlon James' Black Leopard Red Wolf, the first novel by an author I had never read I've read in probably two years. Sadogo is dead, the Minji are dead (but for Smoke Girl, maybe), Leopard is dead but can dig for resurrection (maybe, and *this* maybe may be bridge to second book of planned trilogy). I bet a pint the Aesi gets one of the two. But that is not the story.

I don't do reviews (Ed does) beyond this, my format for positive reviews: if I like you and you ask nice I'll get you a copy.

First time I enjoyed reading a novel since the last until the next, first time I've wanted to read a next novel (as opposed to feeling obligated to always be in a novel) in forever....

I can't imagine rereading any novel and hereby suspend my (not religiously honored) rotation of rereads, so that copy of Vollmann's Fathers and Crows over on the piano bench which I picked up and read two pages last night, no. I won't do Whale Slaughtering again (ever, if I had to guess now no matter no one used the English language better anywhere, I can't do the whale slaughtering again). I'm giving Pynchon and Barth and Elkin and Melville and Ishiguro and Harington and Gass and Eliot and Vollmann and Dostoyevsky and Grossman and Murnane and Krasnahorkei and anyone else whose novels I've read at least a year off, ibid.

Recommend something, anything, or not. I'm not taking Olive off: 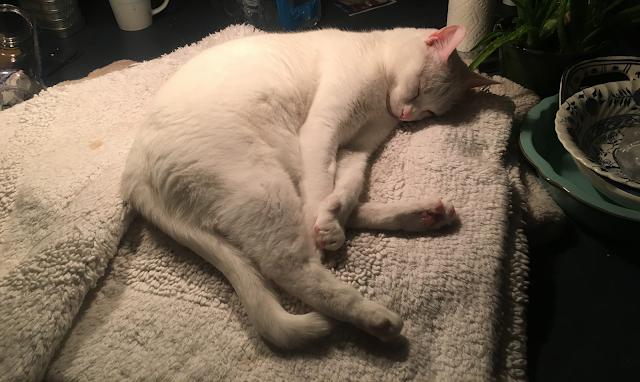 
I don't see the point of
remembering you; you're too boring,
Iowa City, Iowa,
much duller topologically than
Needles, California. I'm here
in the Rebel Motel, with
my grape-colored sweater
and maté tea, whose smoky odor's
bound up with first rooms and foods here
sex and snow. I
write about Needles
Herman and rocks, the story's called
“As Good as Anything,” and in it
daft Herman—true local
of Needles—says
“Rocks is as good as anything.”
I figured that out summer after
first love affair in New York:
hung out, home, at a rock shop
inspecting geodes and thunder eggs
Arsenic samples and petrified
dinosaur dung.
What can I say about Iowa City
everyone's an academic poetry
groupie, I haven't yet written a poem,
there's a bar where for 25 cents a
meal of boiled egg and tiny beer.
Really I don't know what kind of poetry—
what's the name of the make they
use here—or what kinds of
poetry live people write in the world.
Is there a right and wrong poetry, one might
still ask as I patronize,
retrospectively, the Iowa style,
characterized, as I remember,
by the assumption of desperation
boredom behind two-story houses
divorce, incomes, fields, pigs,
getting into pants, well not really
in poems, well no “well”s and all
in the costive mode
of men who—and the suicidal women—
want to be culpable for something,
settle for being mean to their wives
and writing dour stanzas. God this is bitchy
I modeled for art classes
that's rather interesting
the hypocrisy: nobody needs
to paint nude women
they just like to. So here I am
naked for art, which is a lot of
dumb fucks I already know,
same with poetry.
Written and judged by. Those befoibled guys
who think—you know—
the poetic moment's a pocket in
pool; where can I publish it; what can
I do to my second or third wife now.
Nothing happens in Iowa, so
can I myself change here? Yes
I can start to become contemptuous
is that good or bad, probably bad.
In New York I'd developed a philosophy
of sympathy and spiritual equality:
out the window, easily, upon
my first meeting real assholes.
“A rock's as good as anything”
there are no rocks in Iowa
shit-black soil, a tree or two,
no mountain or tall edifice,
University drabs, peeping Toms, anti-war
riots, visiting poets
treated like royalty, especially if
they fuck the locals or have a record
of fighting colorfully with their wives.
You can go to the movies once a week,
like in Needles. You can fuck
a visiting poet;  you can be paraded before
a visiting poet as fuckable but not fuck.
You can write your first poems
thinking you might as well
since the most stupid people in the universe
are writing their five hundredth here.
I'm doing that now. What
difference does it make.
I like my poems. They're
as good as rocks.
Posted by BDR at 9:55 AM

Email ThisBlogThis!Share to TwitterShare to FacebookShare to Pinterest
Labels: About That Ceasing Seething, Autoblogography, Brazen Blogwhoring and Attention Sluttery, Dead Blegsylvania, Futile Weekend Blogging, My Blindness, My Inability to Shut the Fuck Up