Coming Home After Midnight to My Deserted Block

Normally I'd gleefully rush to post a new Lambchop song, Lambchop in the inner circle of rotating bands and musicians in My Sillyass Deserted Island Game (which Jim serendipitously mentioned on twitter yesterday the same day I discovered a new Lambchop song), but the new Lambchop song released yesterday, meh!, that's now 0 for 2 of new songs from the as yet unreleased new Lambchop album (pre-ordered already at Bandcamp), this happened recently in fiction (the new Vollmann novel just sucks) and poetry (the new Ruefle doesn't suck but doesn't sing), strange days, the fuck is wrong with me, but it hasn't happened with my cats, have last night's Naploaf, this guy more indoor each passing day 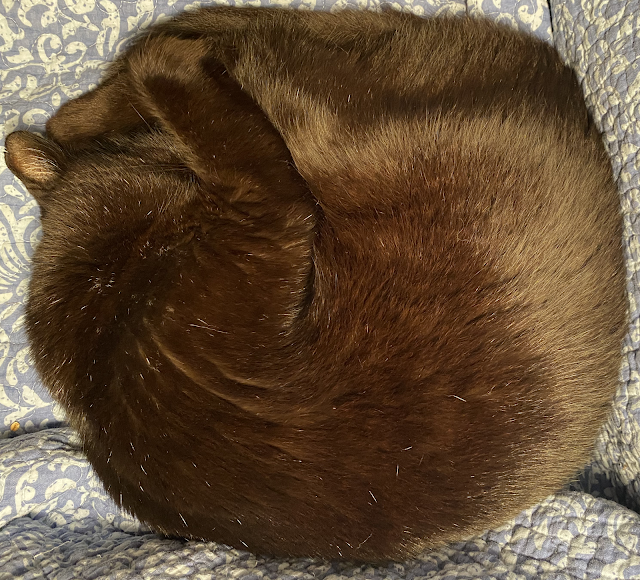 I read somewhere
that if pedestrians didn’t break traffic laws to cross
Times Square whenever and by whatever means possible,
the whole city
would stop, it would stop.
Cars would back up to Rhode Island,
an epic gridlock not even a cat
could thread through. It’s not law but the sprawl
of our separate wills that keeps us all flowing. Today I loved
the unprecedented gall
of the piano movers, shoving a roped-up baby grand
up Ninth Avenue before a thunderstorm.
They were a grim and hefty pair, cynical
as any day laborers. They knew what was coming,
the instrument white lacquered, the sky bulging black
as a bad water balloon and in one pinprick instant
it burst. A downpour like a fire hose.
For a few heartbeats, the whole city stalled,
paused, a heart thump, then it all went staccato.
And it was my pleasure to witness a not
insignificant miracle: in one instant every black
umbrella in Hell’s Kitchen opened on cue, everyone
still moving. It was a scene from an unwritten opera,
the sails of some vast armada.
And four old ladies interrupted their own slow progress
to accompany the piano movers.
each holding what might have once been
lace parasols over the grunting men. I passed next
the crowd of pastel ballerinas huddled
under the corner awning,
in line for an open call — stork-limbed, ankles
zigzagged with ribbon, a few passing a lit cigarette
around. The city feeds on beauty, starves
for it, breeds it. Coming home after midnight,
to my deserted block with its famously high
subway-rat count, I heard a tenor exhale pure
longing down the brick canyons, the steaming moon
opened its mouth to drink from on high ...
Posted by BDR at 9:51 AM

Email ThisBlogThis!Share to TwitterShare to FacebookShare to Pinterest
Labels: About That Ceasing Seething, Brazen Blogwhoring and Attention Sluttery, Dead Blegsylvania, Fuck Me, Lambchop, MSADI5G, My Blindness, My Complicity, My Inability to Shut the Fuck Up