Sentiments Emblazoned on T-Shirts Proclaiming the Lateness of the Hour 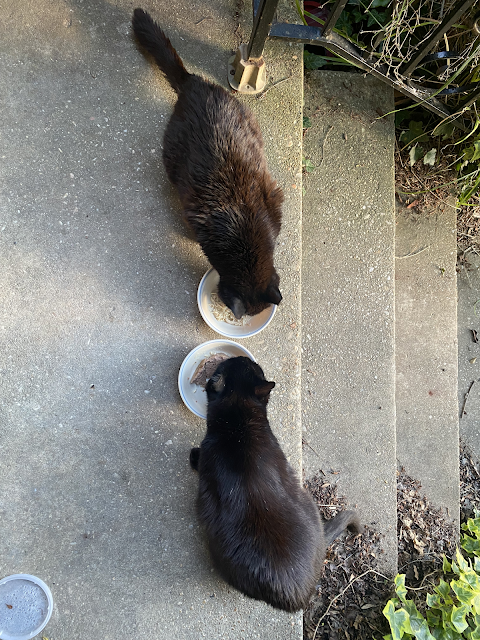 My carnivorous black cats, I won't pay for tortured then slaughtered sentient animals for me to eat but I give Chewy, with guaranteed next day fossil fuel powered delivery, money for tortured then slaughtered sentient animals for my cats to eat. The Gulf of Mexico is on fire while I walk my empty cans of club soda to the recycle bin. My bosses through some benign but mostly malign incompetence (everyone's mileage varies) and general contempt and disrespect (everyone's mileage the same) have driven half my colleagues away, everyone remaining (but me) actively seeking to get out. This is the motherfucker Democrats will nominate to run for governor of Maryland. This historian of American Crackerism writes: "What Democrats have been slow to understand is that this is an insurgency against democracy with parliamentary and paramilitary wings," and honestly seems to believe Democrats are stupid not complicit. The electricity powering my laptop is generated by coal strip-mined in West Virginia. Hank Dietles is reopening. Seven of seven cats were sick of the turkey pate wet catfood so I ordered shredded chicken in gravy wet catfood, six of seven adore the shredded chicken in gravy wet catfood, Napoleon hating, getting the remaining cans of turkey pate. The Gulf of Mexico is on fire. The Supreme Court just signaled states can manipulate voting results anyway they choose. British Columbia got to 121 degrees this week. I spend more time on holiday weekend posts than on any others, and I remembered to post a 575 at the other place (575 related to this dialogue) for the holiday weekend. I will get in my fossil fuel powered car and drive to PetSmart to buy various flavors of tortured then slaughtered sentient animals for Napoleon to sample before I order cases of untested tortured then slaughtered sentient animals from Chewy. The new Evan Dara sucks, I bought it at Amazon. The Democratic president of the United States brags that ketchup is eighteen cents cheaper this year than last. There's a new posthumous Ashbery, I will drive in my fossil fuel powered car to a local bookstore rather than order from a shitlord, revolution, fuckers. Per usual I woke up with Pollard in my head, this new:

Email ThisBlogThis!Share to TwitterShare to FacebookShare to Pinterest
Labels: Ashbery, Brazen Blogwhoring and Attention Sluttery, Futility, GbV, My Blindness, My Complicity, My Inability to Shut the Fuck Up