Feathers Fluffed the Ashtray Bin at the Bottom of the Elevator

Also too, Earthgirl's on a hot streak, her palette expanding, her technique evolving 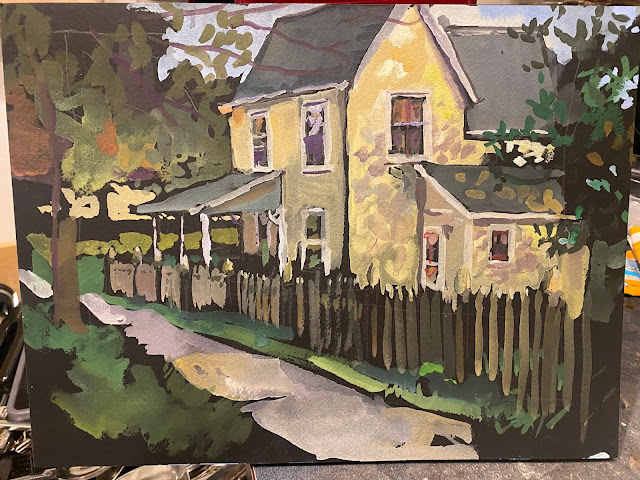 Also too, when I sat at picnic tables every summer evening on Sugarloaf until just before closing and read - this was before the internet was all inclusive - and read in bed, and read in the daytime and before sleep, I kept a list of novels read (long since incinerated because tonsure's my pleasure). I don't finish novels anymore, and not just because of my eyes. I listen to music as voraciously as always, and I read poetry not as voraciously as once but daily until my eyes hurt, but I lose all forward impetus in every novel I start, I lose interest, it's not only my getting older faster the fuck with getting older faster and can't concentrate much less organize like once (though I am getting older and can't concentrate or organize like once), and strangest: I don't seem to care as an option for the first time, and worse, and/or better, I can envision abandoning my rule of fifty plus years that I must always be working a novel

The last novel I read that I finished that stayed in me beyond the day I finished it was Ishiguro's *Clara and the Sun* this past Spring, but the only first read novel in the past five years that imprinted on me and remains imprinted is Marlon James' *Black Leopard, Red Wolf,* the first in a trilogy, and I discovered yesterday the second of the trilogy, *Moon Witch, Spider King,* released this coming February (I stalled in Mantel's third of Cromwell Trilogy (and have no intention of going back) (when was the last time you thought about much less read the Deptford Trilogy? the Balkan Trilogy? I burned lists with multiple rereadings of both included)). Will attempt to reread *BL, RW* before reading *MW, SK,* no doubt fucking up my reading of both.

My friend H responded to my inquiry about Fleur Jaeggy, recommended, I got my hands on one, I have access to a university library, ten pages in I loved it, thirty pages in I'm done, fuck me

Feathers fluffed the ashtray bin at the bottom of the elevator. Feathers and a smeared black look littered the parking lot like mascara. A cage would glide back and let them out to merge with the other cars on La Brea. It looked as if a struggle had ended in tears between the bird and an enemy. She broke through the fear to examine it. No chicken claws, or comb, no wing, no egg. The neutrality of words like “nothing” and “silence” vibrated at her back like plastic drapes. How could there be a word for silence? A child’s lips might blow, the North wind bring snow, a few stars explode, boats rock, but whatever moved in air did not by necessity move in ears and require the word “silence” therefore. She had personally sunk to a level where she could produce thought, and only “violence” remained a problem. It was common in her circle. A bush could turn into a fire, or a face at a clap of the hand could release spit and infection. The deviants were like herself unable to control their feelings. Los Angeles for them was only hostile as a real situation during the rainy season when torrents ripped down the sides of the canyons and overnight turned them sloshy. Then they hid in underground places, carrying Must the Morgue be my Only Shelter?? signs. But the rest of the time the sort of whiteness spread out by a Southland sun kept them warm, and they could shit whenever they wanted to, in those places they had long ago staked out. My personal angel is my maid, said one to another, putting down his Rilke with a gentle smile.

Email ThisBlogThis!Share to TwitterShare to FacebookShare to Pinterest
Labels: Brazen Blogwhoring and Attention Sluttery, Futility, Ishiguro, My Blindness, My Complicity, My Inability to Shut the Fuck Up