Doing the Usual Thing I Can Forget It's Happening 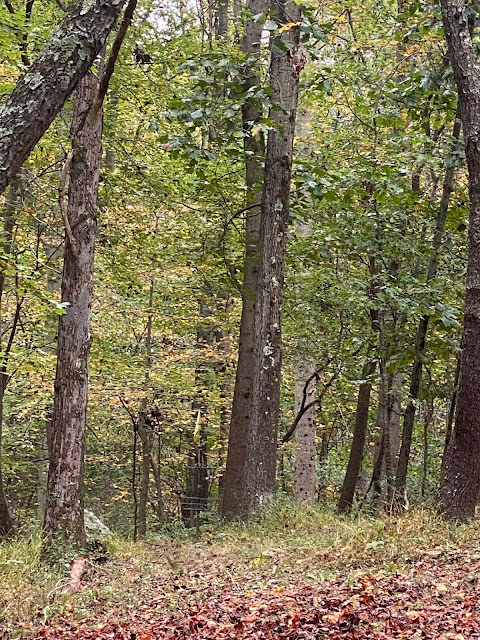 I disc-golfed Monday past with Dr Z at Seneca Creek State Park in Gaithersburg Maryland, my home course (in the town I grew up in), above Hole 12, pin in D (21 of the 27 holes in longest possible pin), I sponsor a hole along with SeatSix 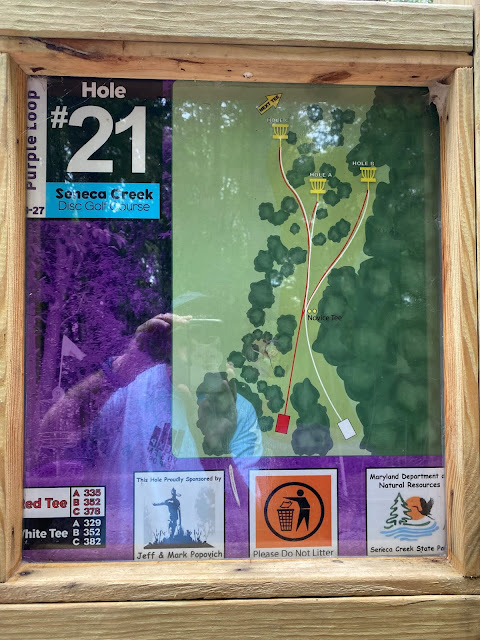 When I got there I had no deet to poison my legs, dying by deet better than dying by lyme, my Subaru a piece of shit, all my deet in Earthgirl's car, I only drive my car to work and back usually, and Dr Z exhausted his last deet poisoning his legs, I picked six ticks off me there, one munching my inner right thigh last night, don't be jealous. I can hike with Earthgirl seventeen months in the remotest woods and get no ticks, two hours with Dr Z on my home disc golf course I get seven (and counting?) ticks?

Dr Z got married during the plague and his daughter asked asylum from rural Minnesota and her Kind dad granted sanctuary during the plague, yay for Dr Z! his disc much improved since last we threw; he throws an Innova Wraith, one of four humans still throwing an Innova Wraith but the only one voluntarily, he throws the right height to get the S-curve and hits fairways, and he rocs his ups better but best still putts Fuck It and I love him for it cause missing low is lame

Dr Z asked me about my Subaru as in Should I Buy A Subaru? and NO! don't do it, I only mention because on drive home from my home course the automatic transmission warning flashed as did the tire and brake and air bag warnings and warnings I've never seen on a dashboard, the Subaru service check-in person reassured me it's just the automatic transmission that's the emergency, it's programmed to turn on every alert on the dashboard to get my attention, he soothingly and patiently explained, so I see the warnings so I've time to prepare to coast to a stop on the Beltway when my transmission clamps down and hope I'm lucky enough to make a soft-landing on a shoulder, though the oil light has been on for six months because the engine leaks oil, the transmission will cost $3K to fix, the engine leak, a direct result of a Subaru mandatory recall in which the engine had to be removed and was reinstalled fucked up will cost $12K to fix and fuck that, I am without a car, Today in My Privilege and Complicity! fuck me

Ticks aren't dumb and know where to eat and everything's a fart anyway. I carried a beast, leopard, roc of course, when in doubt throw a roc when not in doubt throw a roc, a wolf, putted w an aviar, not in my disc bag, that's on Mt Desert Island until next July and not by design, but in a daypack I used on Mt Desert Island when hiking with Earthgirl. The pitch-n-putts in Maine and Michigan, O Seneca Kick My Ass Forever, home course, on the very few throws my mechanics were OK I've lost those muscles and that muscle twitch, Seneca, I can't give the course extra feet, if I get the red basket on 13 in five in my lifetime I will deet my legs against ticks and never buy another Subaru, will let Seneca kick my Noodle Ass Arm Self again and not buy a Subaru again soon even though I circle-nined the hole last Monday

I skipped Lindsey Buckingham's birthday cascade last week because (a) the couple of songs off the new album I'd heard didn't melt me and (b) nothing tastes as good as I remember it tasting and (c) I'm not sure whether anything will ever taste as good as it did or nothing ever tasted as good as I thought it did, death to the either/or of course. But these three songs, especially the first two, feel sorta like the boom I remember or at least the boom I remember imagining I felt once

Email ThisBlogThis!Share to TwitterShare to FacebookShare to Pinterest
Labels: Brazen Blogwhoring and Attention Sluttery, Buckingham, Dead Blegsylvania, Disc, Futility, My Blindness, My Complicity, My Inability to Shut the Fuck Up