Think of Those Barren Places Where Men Gather to Act in the Terrible Name of Rectitude, of Acned Shame, Punk’s Pride, Muscle or Turf, the Bully’s Thin Superiority

Some pivot happening. I have told you three time we are being reprogrammed and deactivating The Donald receptor in our head been ordered by shitlords, links below, (not a tenth of it, Donald shitfitting tonight as I type this), I tell you who our shitlords *do* find dreamy below, hey, remember when there was a worldwide pandemic and you had to wear a mask and drink government poison or your kids were seized and sold into Comet Badmitton's sex slavery operation and you couldn't go to helmetball games and hoot racist chants at your white-or-death home town team, I guess that one's not being reprogrammed just less emphasized, winter woods yesterday, yo 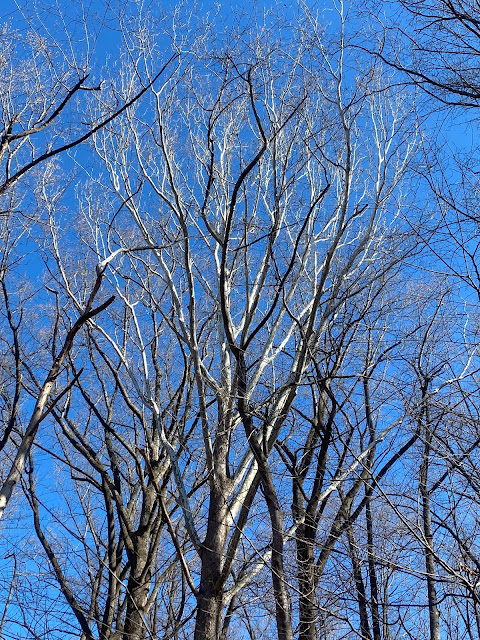 Laugh. I am telling you three times we are being reprogrammed and revelation of The Donald's sins are to off him, yes, but with no consequences for actions this is nothing but normalization of acceptable political practice in the soon-to-be United States of Authoritarianism Just Not Lead By *That* Jackass (and best useful (right-wing Republican Party cracker-whisperer) idiot (savant) ever)

Best cat ever yesterday, our house and the sun:

THE FEAST OF STEPHEN

I
The coltish horseplay of the locker room,
Moist with the steam of the tiled shower stalls,
With shameless blends of civet, musk and sweat,
Loud with the cap-gun snapping of wet towels
Under the steel-ribbed cages of bare bulbs,
In some such setting of thick basement pipes
And janitorial realities
Boys for the first time frankly eye each other,
Inspect each others’ bodies at close range,
And what they see is not so much another
As a strange, possible version of themselves,
And all the sparring dance, adrenal life,
Tense, jubilant nimbleness, is but a vague,
Busy, unfocused ballet of self-love.
II
If the heart has its reasons, perhaps the body
Has its own lumbering sort of carnal spirit,
Felt in the tingling bruises of collision,
And known to captains as esprit de corps.
What is this brisk fraternity of timing,
Pivot and lobbing arc, or indirection,
Mens sana in men’s sauna, in the flush
Of health and toilets, private and corporal glee,
These fleet caroms, plies and genuflections
Before the salmon-leap, the leaping fountain
All sheathed in glistening light, flexed and alert?
From the vast echo-chamber of the gym,
Among the stumbled shouts and shrill of whistles,
The bounced basketball sound of a leather whip.
III
Think of those barren places where men gather
To act in the terrible name of rectitude,
Of acned shame, punk’s pride, muscle or turf,
The bully’s thin superiority.
Think of the Sturm-Abteilungs Kommandant
Who loves Beethoven and collects Degas,
Or the blond boys in jeans whose narrowed eyes
Are focussed by some hard and smothered lust,
Who lounge in a studied mimicry of ease,
Flick their live butts into the standing weeds,
And comb their hair in the mirror of cracked windows
Of an abandoned warehouse where they keep
In darkened readiness for their occasion
The rope, the chains, handcuffs and gasoline.
IV
Out in the rippled heat of a neighbor’s field,
In the kilowatts of noon, they’ve got one cornered.
The bugs are jumping, and the burly youths
Strip to the waist for the hot work ahead.
They go to arm themselves at the dry-stone wall,
Having flung down their wet and salty garments
At the feet of a young man whose name is Saul.
He watches sharply these superbly tanned
Figures with a swimmer’s chest and shoulders,
A miler’s thighs, with their self-conscious grace,
And in between their sleek, converging bodies,
Brilliantly oiled and burnished by the sun,
He catches a brief glimpse of bloodied hair
And hears an unintelligible prayer.
Posted by BDR at 7:58 AM

Email ThisBlogThis!Share to TwitterShare to FacebookShare to Pinterest
Labels: Brazen Blogwhoring and Attention Sluttery, Hecht, My Blindness, My Complicity, My Inability to Shut the Fuck Up