Our Own Lives Taken by Taking Them Out

Last Nap words here: I was upset I was not more upset at Napoleon's death but now I'm not upset I'm not more upset. I prepared for bad news with Napoleon since we trapped him as a feral kitten born and living in our shed and for $50 had him deballed, flea-rid and dewormed, vaccinated, and he loved us and us him and as a condition for his coming in the house when he wanted he got to leave the house when he wanted except for that three months ten years ago when he needed quarantined in L's yarn room for rabies after almost dying from an infected animal bite (vet thought coyote, the vicious coyotes of Montgomery County Maryland), when young he'd disappear for days, come back (when I'd post the Emergency Napoleon Alert System on blog) cut-up, starving, tired, up to six weeks ago he'd meet us on our late evening walks a mile from home, I prepared for him to disappear and not know how why where when and most horribly from day one... I'm sad he's dead after a long life, more grateful he came home to die, thank you to those who sent Kind words, here are my azaleas last night 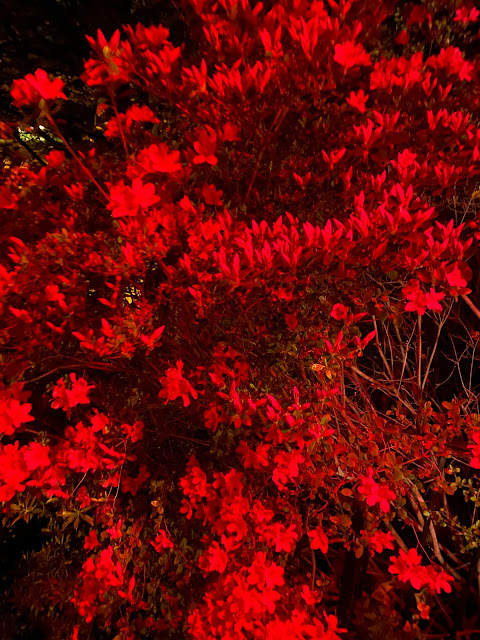 Have I mentioned Bookkeeper retiring? I'm more upset I'm not happier she's leaving than I was ever upset I wasn't more upset over Nap's death. The Michigan State Senator hailed as brave for calling a cracker a cracker represents the district of the town my daughter teaches in, watching professional Democrats performatively pretend to be considering calling crackers crackers as a midterm strategy, laugh, professional Democrats will not be calling crackers crackers and shitlord orders to shitlord stenographers no doubt already sent to shut the fuck up about the Michigan State Senator who eloquently and forcefully called crackers crackers (by defining herself as a traditional straight white Christian, laugh) Bleggalgaze: I'm delighted the fuck-it peaking for now and am always prepared but always upset when it ebbs

Some endings of the world overlap our lived
time, skidding for generations
to the crash scene of species extinction
the five minutes it takes for the plane to fall,
the mile ago it takes to stop the train,
the small bay        to coast the liner into the ground,

the line of title to a nation    until the land dies,
the continent uninhabitable.
That very subtlety of time between

large and small
Media note        people chasing glaciers
in retreat up their valleys        and the speed...

watched ice was speed made invisible,
now—        its days and a few feet further away,
a subtle collapse of time between large

and our small human extinction.
If I have a table
at this event, mine bears an ice sculpture.

Of whatever loss it is    it last as long as ice
does until it disappears        into its polar white
and melts        and the ground beneath it, into vapor,

into air.    All that once chased us and we
chased to a balance chasing back, tooth for spear,
knife for claw,
locks us in this grip
we just now see
our own lives taken by
taking them out.          Hunting the bear,
we hunt the glacier with the changes come
of that choice.
Posted by BDR at 9:42 AM

Email ThisBlogThis!Share to TwitterShare to FacebookShare to Pinterest
Labels: Brazen Blogwhoring and Attention Sluttery, Futile Weekend Blogging, My Blindness, My Complicity, My Inability to Shut the Fuck Up
Newer Post Older Post Home