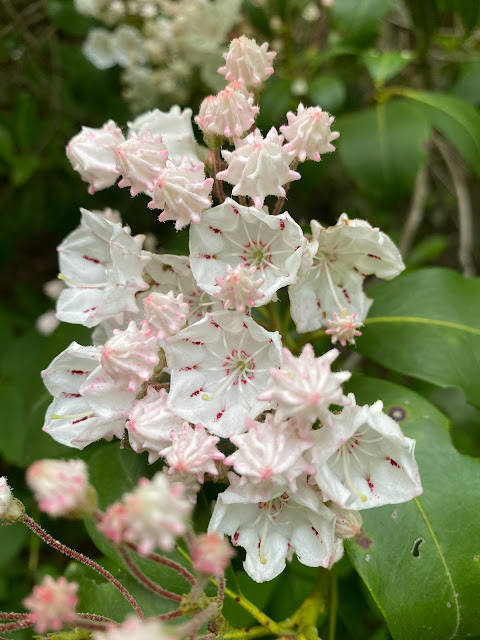 Get Madge off the top of the page, Violence? You're soaking in it! yo, here're mountain laurels last evening at Rachel Carson, one of two best trails in Moco for mountain laurel (the other being Seneca Greenway between Old Seneca and Berryville Roads which we'll do this weekend), we are four or five days away peak mountain laurel. 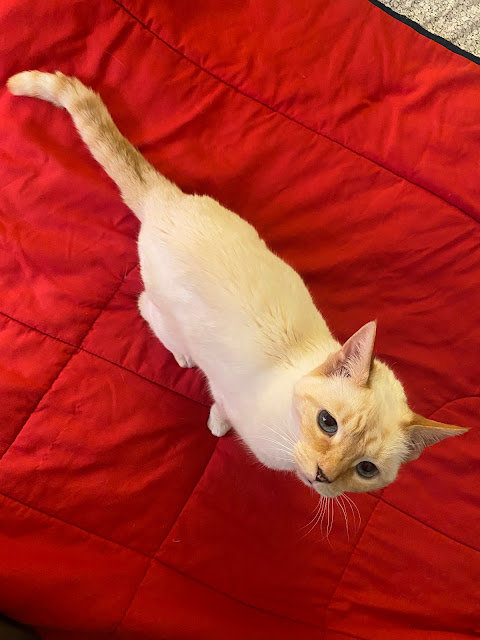 Seething: I must have enjoyed it to the point of addiction once, did I ever think seething unto itself a sign of posed righteousness and if yes of what? Duty? When I went to youtube to find the Crumb I had to sit through an ad created since the Uvalde Massacre by motherfucking Senate Democrats asking for donations to their reelection campaigns to help them curb gun violence, fund raising off an event regularly expected (if not each event specifically scheduled) by shitlords to maintain Shitlordistan Exceptionalism: the events themselves may be random but their occurrence planned, prompted, anticipated, profitable! If you're reading this shitty blog, why do I scream this at *you*?

THE MASSACRE OF THE INNOCENTS

Because I believe in the community of little children
Because I have suffered such little children to be slain:
I have gazed upon the sunlight, dazed, bewildered,
As is a child by nothing more than rain.

Not until I can no longer climb,
Until my life becomes the tallest tree,
And every limb of it a lint of shame,
Shall I look out in time, in time to see

Again those who were so small they could but die
Who had only their vast innocence to give:
That I may tell them, pointing down to the sky,
How beautiful it was to live.

This is a place without a terrain a government that always
changes an unstable language. Even buildings disappear
from day to day.

[the question or the statement

realism's authenticities are not the question

the question [role of art in the State

we know art is fundamental to the [New State] as is evidenced
in village scenes, majestic ancient views, masses and
masses of [generic human figures] marching in columns,
swords coded as plowshares, image as spectacle

we know [name of major historical figure] calls, authentically,
for a more total, more radical war than we can even
dream in the language of the avant-garde

something encloses the impossible in a fable

an unreal world called real because it is so heavily metaphoric

we can't keep our fingers of connection out of it

it is a ride in the country, the car crowded with children
[each child represents a different
ethnicity of [name of nation]

it is a guiding of the child towards the right path

it is a picnic in a field, the spread is bountiful
[the spread of [name of nation] is represented through the
arrangement of food on the checkered tablecloth

it is [name of major historical figure]'s Art Collection:
figure after figure
each carries spears, lunges, draws the arm back to pull
tight the bow

another plays a lute

an eagle holds a symbol

fake [name of nation used as an adjective] heads

while when nation turns to art, art loses its divergence

while the [generic human figures] come back from war, their
legs in fog

while a [generic human figure] sculpts, small against the
expanse of marble, giving into the monumental human
form that symbolizes eugenic possibilities

or [name of major historical figure] hails a cab, [generic
possessive human pronoun] hand raised here, beckoning
as the red flag with [name of fast food chain] waves
behind [generic human pronoun] and the red star on top
of the [name of cultural landmark in major city] twinkles.

many people raise their hands for different purposes all day
long

we are always waiting for our cab to come

the question here is the same as that of a relationship
where does art define our vocabulary?

[it is impossible to speak about something

it is only possible to speak beside it
Posted by BDR at 10:44 AM

Email ThisBlogThis!Share to TwitterShare to FacebookShare to Pinterest
Labels: About That Ceasing Seething, Brazen Blogwhoring and Attention Sluttery, Dead Blegsylvania, Futility, My Blindness, My Complicity, My Inability to Shut the Fuck Up