Father's Day gifts, a steel reflecting ball from son-in-law, it will be placed in the middle of a circle of Dogduck, Dinosaur, and whatever garden statuary I bring home by the same artist on this trip, and the Napoleon bowl hand-crafted by daughter on news of Nap's death, she and I will be getting matching tattoos of that Napoleon on our right arms, her on her upper arm, me on my forearm 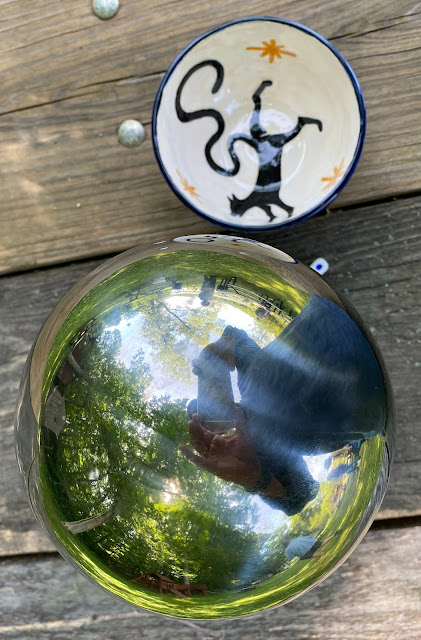 Thrown two rounds of disc at Portage Lake, Portage Lake longer than a pitch-and-put but shorter than newer disc golf courses, 60 on Saturday, 62 (with ticks, laugh, stay in the fairway, Jeff) yesterday. L kayaks and paints from the kayak on Spring Lake, the small lake that's the backyard of the house we are renting. Roughly half the people wear masks in the grocery store in Ann Arbor, roughly nobody wears masks in the Meijers (the WalMart of Michigan) in Jackson. Lunch with the in-laws yesterday (when I got my Father's Day gifts) extremely OK. Hiking excellent, if my daughter has to live in Michigan at least it's near some of the best hiking on the southern tier of the lower peninsula. Jackson County sheriff's deputy followed me a mile or two yesterday though I think it incidental in this case. I can't read anything and writing is spurt, the local beer is delicious and the Durban Poison stunning - I said to L as we got off the Ohio Turnpike in Toledo to head north on 23 towards Ann Arbor, I wonder how far over the Michigan border before the first weed store billboard, a quarter-mile? - it was a hundred yards. Here's the view from our back porch. 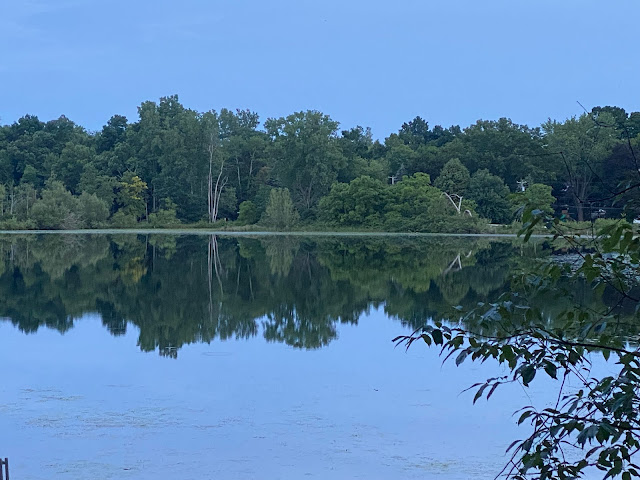 Strange not to be worrying about Napoleon while on vacation hundreds of miles from home, this is new. Leaving to hike now then I will play Hudson Mills Disc Golf Course this afternoon while L paints and then C & I come over to sit on our screened-in back porch to watch the sunset. We caught a break with weather, no rain, so the app tells me, though end of next weekend. Frogs urp all night, and birdsong starts at first light and ends at pitch dark. I have no plans to link farm here and no plans to not link farm, I have no plans to bark here and no plans to not bark here. I am strangely not anxious about work like I've always been on vacation and not anxious I'm not anxious, this is new. On disc course yesterday one local started to talk clusterfuck and me and other two said please stop. As is custom on long drives to vacations in houses on a glacier lake or pond, Lampchop in the speakers, HEY! this is new

Email ThisBlogThis!Share to TwitterShare to FacebookShare to Pinterest
Labels: Brazen Blogwhoring and Attention Sluttery, Dead Blegsylvania, Disc, Lambchop, Michigan, My Blindness, My Complicity, My Inability to Shut the Fuck Up, Napoleon, Ruefle