stop breathing he tells himself THE MURMURING GRIEF OF THE AMERICAS (You are on the ground...)

You are on the ground, wrapped in a ratty blanket at the edge of the cage. The interpreter wedges her way into the corner. She sits on her knees, brings her head to your mouth so she can hear the whispers that barely come:

She slides your hat off so the cameras can see you more clearly. You refuse to open your eyes. It is what you have been instructed to do. But the director is unhappy: with the blocking, the angles, the shadows. He asks the interpreter to tell you to look into the camera as the hat is removed from your head.

The assistants give your wrapped-up body a few rolls. They twist you into the proper position, at which point a doctor asks you to open your mouth, to say ahhh while you look into the camera.

This moment here, with your mouth open and the doctor looking into it, is where the scene is supposed to turn. Something transcendent is supposed to happen. But the director can’t figure out how to realize his vision. He yells cut, then confers with his colleagues about what should flow out of your mouth.

Their opinions differ. One suggests a butterfly. Another suggests a snake. Another a stream of the most beautiful words spoken first in a foreign language then translated by a child with a sweet voice, an adorable accent that perfectly articulates how your body and mouth convert the murmuring grief of the Americas into a currency of empathy, accumulation, and massacre.

The crew meets for several more minutes to discuss what should come out of your mouth after the doctor asks you to say ahhh. But the director pauses as soon as the cameras start to roll. He is unhappy about something. There should not be a sunset in the background. There should not be flowers in the foreground.

The world will be dark until we douse his body with light. 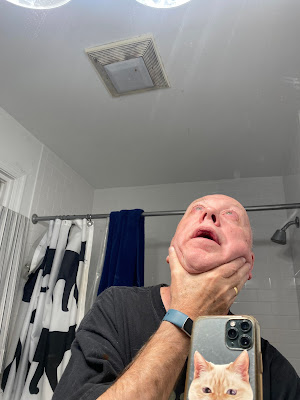 THE EMPIRE OF THE CORPSE FOLDS INWARD

Because the dead felt ashamed of dying in the walls

Because there was a war in my skin

Every once in awhile, they poured milk through the hole in the wall and we cupped our hands and drank it even though it was sour and made us vomit

We were rotting under the florescent lights that covered our bodies

We watched the ants devour her

Her hair went out to sea

There was no choice but to penetrate her more deeply

Squeezed into her orifices from multiple angles while the computer systems analyzed her pulse, her blood, her metabolism

They forced the minions to reproduce her body

The autopsy revealed the systematic fabrication of the clitoris

What were the scabs on the finger from

He thought about the scabs on her finger

He thought: ejaculate and stuff her flesh with worms

He thought: reach the end and fill her mouth with foam

He held his breath as the moment reached and when it passed he thought:

The bodies buried in the wall the gutter the earth: the present is always the past for them

They must be killed again and again

Email ThisBlogThis!Share to TwitterShare to FacebookShare to Pinterest
Labels: Borzutzky, Brazen Blogwhoring and Attention Sluttery, Dead Blegsylvania, Fuck This, Futility, Michigan, My Blindness, My Complicity, My Inability to Shut the Fuck Up