Two Negative Numbers Multiplied by Rain into Oranges and Olives 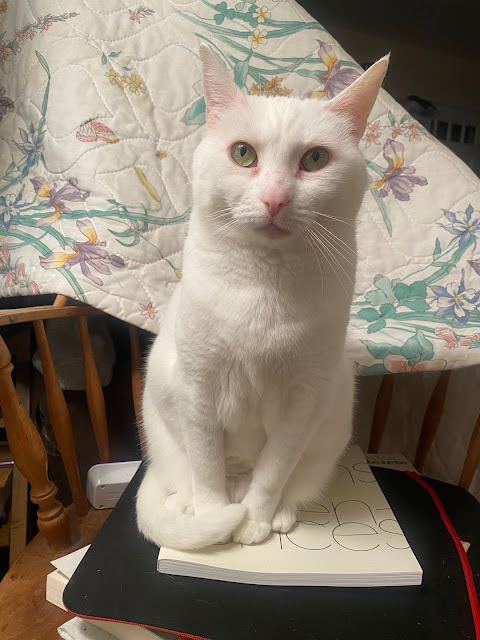 Olive wants to be adored but refuses to sit still for adoration, she mickmocks for touch but slinks when touched, more mink than cat. People already weary of hating motherfucking Democrats, even those scheduled for obamapostasies tomorrow. Fucker's called Newsom and told him to shut the fuck up or else, I bet you any number of digital pints. Someone tweeted the animated corpse of Bill Reilly raging at a Pritzger, governor of Illinois? possible primary challenger to the corpse of Joe Biden, pretending 2024's election hasn't already happened. Do you know people think John Fetterman will save you? One of my daughter's favorite bands - and I vouch too - has a new single out ahead of an October album release

Lie down, you are horizontal.
Stand up, you are not.
I wanted my fate to be human.
Like a perfume
that does not choose the direction it travels,
that cannot be straight or crooked, kept out or kept.
Yes, No, Or
—a day, a life, slips through them,
taking off the third skin,
taking off the fourth.
And the logic of shoes becomes at last simple,
an animal question, scuffing.
Old shoes, old roads—
the questions keep being new ones.
Like two negative numbers multiplied by rain
into oranges and olives.
Posted by BDR at 9:15 AM

Email ThisBlogThis!Share to TwitterShare to FacebookShare to Pinterest
Labels: Brazen Blogwhoring and Attention Sluttery, Dead Blegsylvania, Futility, My Blindness, My Complicity, My Inability to Shut the Fuck Up, Olive