I Do Not Labor Except to Season My Domain

Slowest week of Blegsylvanian year started early this year. Mastodon sucks. Twitter won't die - or will and be resurrected - and will be despicably if correctly cracker-enabling, see you there. Strange feeling, this shot of precarity, albeit about a sillyass shitlord social media app, go without, I bitch that others should not have to go without but I'm not supposed to go without. Peter Gabriel song gag. I still have food, it's only flock, tribe, I obsess. Rituals. Gags. Spontineity, something Mastodon don't. Watching the contacting, flocking, tribing ladder matches, as it happens, everyone reestablishing their relationships with each other, dominant or submissive, kind or unkind, just in delayed time, wheezing servers. The small twitter gang of kind folk I hang with took years to build, I am telling you three times, I don't want to lose it, I don't want to need to rebuild it, it can't be rebuilt. Slowest week of the year in Blegsylvania, why don't I post more Olive photos like this one from two nights ago? 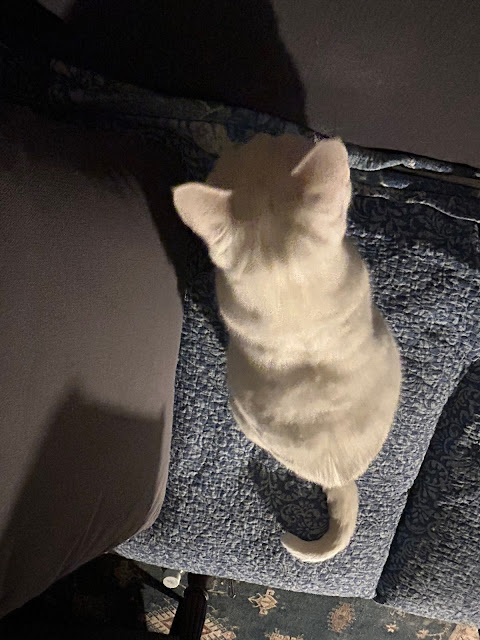 EACH BOUND OF THE FIERY PAPER

1
Who does me this I whistle off
brazen as the green of the Palestinian flag
Strange wishful little books clot my fur
I do not labor except to season my domain
Through seven holes all things twitter
I reject the disjecta of allegory
A sluttery roller skate grips my shoe
2
Is there enough chaos in you to make a world?
The feather on the egg is the horse under the bed
The New England winter is still raw and long
The summer is intense and abandoned
Posted by BDR at 9:24 AM

Email ThisBlogThis!Share to TwitterShare to FacebookShare to Pinterest
Labels: Autoblogography, Brazen Blogwhoring and Attention Sluttery, Dead Blegsylvania, Futile Weekend Blogging, My Blindness, My Complicity, My Inability to Shut the Fuck Up, Olive