Early in The Recognitions Gaddis uses a word I'd forgot, mithridatism, to reference in particular Reverend Gwyon's alcoholism but more generally his self-protective bafflement ("he had, by now, the look of a man who was waiting for something which had happened long before") over... everything:

He was called back to the Seminary for a refresher course, and it was at that time that he developed a taste for schnopps, and started the course of mithridatism which was to serve him so well in his later years.

Ding! if not in the particular than the general. Hey! Did you know Washington DC has a professional soccer team? 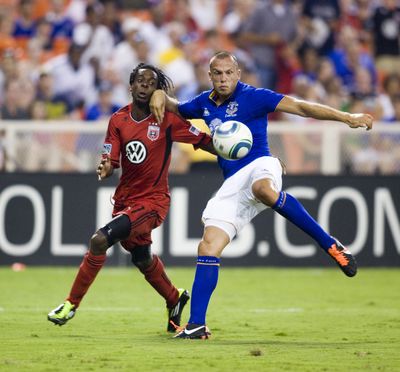 It's true! and I didn't go, I feel no obligation to attend a friendly under any circumstances much less in an oven. I was pleased to read (the game was on Fox, but I felt no obligation to watch a friendly just because it's on TV) St Benny took the chance to play Jakovic next to McDonald in a game that meant nothing, displeased to read United still can't win a fucking home game, even if it is just a friendly.

Jesusfuck, those red kits are hideous.

Hey! speaking of friendlies I feel no obligation to attend, I have four tickets to Manchester United v Barcelona at the hell hole known as Fed/Ex Field this coming Saturday night, July 30, that SeatSix, Landru, Ilse, and myself have the common sense not to use. Want them? Their yours! I don't have a parking pass so you'll have to suck Danny's parking ransom (and beer and food ransom once inside), but you can have the motherfucking tickets for a thank you and the digital promise of a friendly pint someday. I can email them to you.


UNNATURAL SELECTIONS: A MEDITATION UPON WATCHING A BULLFROG FUCKING A ROCK