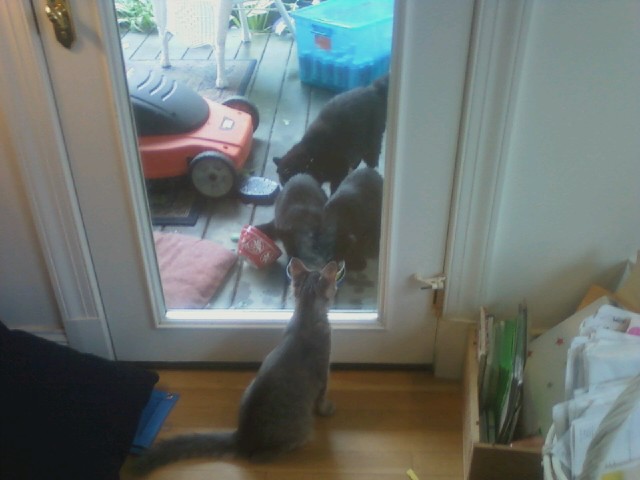 We didn't get our internet connection back (we never lost power) until just before one yesterday afternoon, though I had internet access at 730 Sunday morning as I was checking the building I work in for flood damage. I did make a comment yesterday to a friend's comments on Saturday's post, so while I technically posted something yesterday it wasn't a new post, so yay me, I can go at least one day without attention-whoring, which is good, my attention-whoring so powerful exactly one person in my immediate family remembered yesterday was someone's birthday, and that person called the birthday person from Ohio. Heh, if I hadn't been out grocery shopping and that person from Ohio hadn't reminded the other person in my immediate family that yesterday was my birthday, I wasn't going to tell her. I got a re-gifted Chia Pet and charming apologies. Yay me!

I was going to toggle and bleggalgaze, but while toggling and bleggalgazing are both here and on assignment: Woof's great. Funny, brave, funny, sweet, funny, fearless, funny. I've had to rubberband shut cabinets he's learned how to open; he taunts the older cats (including Napoleon, who is three times Woof's size) until they swat, then chirps (he's always chirping) and runs sideways, his ass catching up to and almost passing his head, and lets himself into the cabinets where he climbs as high as he can and purrs and chirps. Chirps, is funny, won't leave me alone. Yay me!

There, old vicary, congratulate my refuge, the saneside outside sheltering the insane inside: to present the static sane side outside to another outside saneside, to be esteemed for that outsane side as though we weren't both playing the same game, and gone down Summer Street (singing unchristian songs) the inane sinside, pocketing a cool million wearing the shoutside outside and the doubtside inside, the vileside inside and the violinside outside skipping dancing and foretelling things too come all ye faithful, of thine own give we back to thee.


This was gruesome—fighting over a ham sandwich
with one of the tiny cats of Rome, he leaped
on my arm and half hung on to the food and half
hung on to my shirt and coat. I tore it apart
and let him have his portion, I think I lifted him
down, sandwich and all, on the sidewalk and sat
with my own sandwich beside him, maybe I petted
his bony head and felt him shiver. I have
told this story over and over; some things
root in the mind; his boldness, of course, was frightening
and unexpected—his stubborness—though hunger
drove him mad. It was the breaking of boundaries,
the sudden invasion, l but not only that it was
the sharing of food and the sharing of space; he didn't
run into an alley or into a cellar,
he sat beside me, eating, and I didn't run
into a trattoria, say, shaking,
with food on my lips and blood on my cheek, sobbing;
but only that, I had gone there to eat
and wait for someone. I had maybe an hour
before she would come and I was full of hope
and excitement. I have resisted for years
interpreting this, but now I think I was given
a clue, or I was giving myself a clue,
across the street from the glass sandwich shop.
That was my last night with her, the next day
I would leave on the train for Paris and she would
meet her husband. Thirty-five years ago
I ate my sandwich and moaned in her arms, we were
dying together; we never met again
although she was pregnant when I left her—I have
a daughter or son somewhere, darling grandchildren
in Norwich, Connecticut, or Canton, Ohio.
Every five years I think about her again
and plan on looking her up. The last time
I was sitting in New Brunswick, New Jersey,
and heard that her husband was teaching at Princeton,
if she was still married, or still alive, and tried
calling. I went that far. We lived
in Florence and Rome. We rowed in the bay of Naples
and floated, naked, on the boards. I started
to think of her again today. I still
am horrified by the cat's hunger. I still
am puzzled by the connection. this is another
insane devotion, there must be hundreds, although
it isn't just that, there is no pain, and the thought
is fleeting and sweet. i think it's my own dumb boyhood,
walking around with Slavich cheeks and burning
stupid eyes. I think I gave the cat
half of my sandwich to buy my life, I think
I broke it in half as a decent sacrifice.
It was this I bought, the red coleus,
the split rocking chair, the silk lampshade.
Happiness. I watched him with pleasure.
I bought memory. I could have lost it.
How crazy it sounds. His face twisted with cunning.
The wind blowing through his hair. His jaw working.