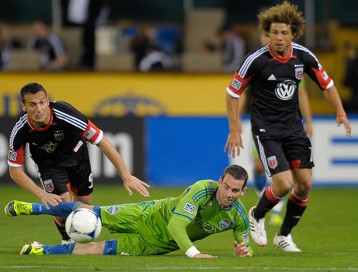 From his secret bunker in central Pennsyltucky Fullback confirms those were two direct hits to the balls of two different Seattle players, the first off which, which I saw directly, was a vicious and deliberate stomp and rake by De Rossario that would have got him red-carded if the ref had seen it. Fuck Seattle and all, but get yourself thrown out of this game and suspended the next, dumb motherfucker?

Dear St Benny of Olsen, you've got to start Boskovic (or anyone other than De Rossario) in attacking central midfield, move De Rossario to withdrawn forward, and bench either Maicon Santo or the Albanian Spatula because you're wasting De Rossario in attacking midfield. Here's what Seattle did - they put two on DeLeon, two on De Rossario (one like glue) and bet United couldn't service their forwards and.... United couldn't service their forwards. Boskovic (yes, I'm silly for Boskovic, but United's invested the money, make him pay off or not) at least creates the defensive need to mark three people.

Also, Kitchen - thank goodness the U-23 USMNT crashed out of the motherfuckingly stupidass Olympics, because - yes, I know it's a new position at defensive mid - who knows how much further Kitchen's development would have been stunted on the back-line under Caleb Porter. Right now: he's the broken link between the back and the wings, attacking mid.

But Seattle's better - bigger, faster, smoother, better organized, better coached - so a draw shouldn't feel like both a defeat (the Albanian Spatula gacking a sitter) and a victory (Marc Fucking Burch's blind header off the cross-bar at 9230). Speaking of Marc Fucking Burch 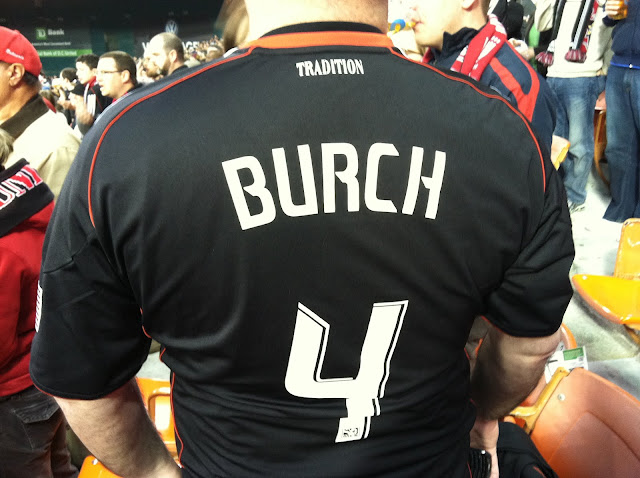 that's this guy in a Burch shirt last night, giving us one more chance to argue Burch is useful versus useless. It's fun!) Here are highlights (of the game, not the argument). Here's AMT, here's Floyd of Ives. More later if and when.
Posted by BDR at 9:53 AM