lets have old fashioned funerals & stand around & forgive & borrow wet handkerchiefs, & sneak out for drinks & help load the guy into the wagon, & feel sad & make a date with the widow & believe we don’t see all of the people sinking into the subways 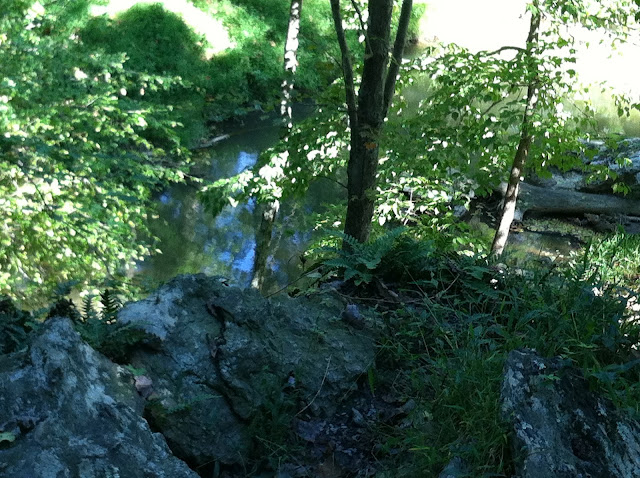 Missed another United home game last night because I was needed elsewhere because. There is one regular season game left against Columbus the third weekend in October that I'm going to miss to visit Planet in Bamgier, so if United doesn't make the playoffs I won't see another home game until next March/April. I believe United signed a lease through next season for RFK so this nagging thought I might never see United at RFK ever again is just Baal-taunting combined with sleep deprivation and localized aargh. As for the because, we hiked Seneca Greenway yesterday morning, two miles out to that beautifully modest rock over the creek and back and then had a nice lunch with the Oaktons. United was sacrificed for those three hours.


A TERROR IS MORE CERTAIN

A terror is more certain than all the rare desirable popular songs I
know, than even now when all of my myths have become . . . , & walk
around in black shiny galoshes & carry dirty laundry to & fro, & read
great books & don’t know criminals intimately, & publish fat books of
the month & have wifeys that are lousy in bed & never realize how
bad my writing is because i am poor & symbolize myself.


A certain desirable is more terror to me than all that’s rare. How
come they don’t give an academic award to all the movie stars that
die? they’re still acting, ain’t they? even if they are dead, it should
not be held against them, after all they still have the public on their
side, how would you like to be a dead movie star & have people sit-
ting on your grave?


A rare me is more certain than desirable, that’s all the terror, there
are too many basketball players in this world & too much progress
in the burial industry, lets have old fashioned funerals & stand
around & forgive & borrow wet handkerchiefs, & sneak out for
drinks & help load the guy into the wagon, & feel sad & make a
date with the widow & believe we don’t see all of the people sink-
ing into the subways going to basketball games & designing baby
sitters at Madison Square Garden.


A certain me is desirable, what is so rare as air in a Poem, why can’t
i write a foreign movie like all the other boys my age, I confess to all
the crimes committed during the month of April, but not to save
my own neck, which is adjustable, & telescopes into any size noose,
I’m doing it to save Gertrude Stein’s reputation, who is secretly
flying model airplanes for the underground railroad stern gang of
oz, & is the favorite in all the bouts . . . not officially opened yet
Holland tunnel is the one who writes untrue phone numbers.


A desirable poem is more rare than rare, & terror is certain, who
wants to be a poet & work a twenty four hour shift, they never ask
you first, who wants to listen to the radiator play string quartets all
night. I want to be allowed not to be, suppose a man wants to
swing on the kiddie swings, should people be allowed to stab him
with queer looks & drag him off to bed & its no fun on top of a
lady when her hair is full of shiny little machines & your ass
reflected in that television screen, who wants to be a poet if you
fuck on t.v. & all those cowboys watching.