The Perfect Voter Has a Smile but No Eyes


Elliott Carter died yesterday. He changed the way I listen to music. There will be much here the next few days. As for POTUS and today and tomorrow, I found it tremendously funny and charming that when I went searching for Carter works last night the youtube you might like this too algorithm came up with Mazzy Star which I love love love too, look, here's a screen shot to prove it. 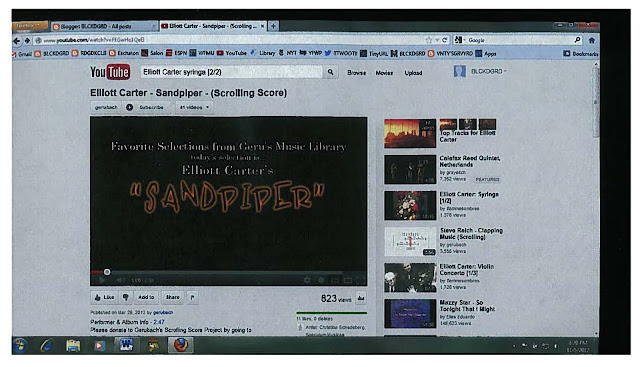 The perfect voter has a smile but no eyes,
maybe not even a nose or hair on his or her toes,
maybe not even a single sperm cell, ovum, little paramecium.
Politics is a slug copulating in a Poughkeepsie garden.
Politics is a grain of rice stuck in the mouth
of a king. I voted for a clump of cells,
anything to believe in, true as rain, sure as red wheat.
I carried my ballots around like smokes, pondered big questions,
resources and need, stars and planets, prehistoric
languages. I sat on Alice's mushroom in Central Park,
smoked longingly in the direction of the mayor's mansion.
Someday I won't politic anymore, my big heart will stop
loving America and I'll leave her as easy as a marriage,
splitting our assets, hoping to get the advantage
before the other side yells: Wow! America,
Vespucci's first name and home of free and brave, Te amo.