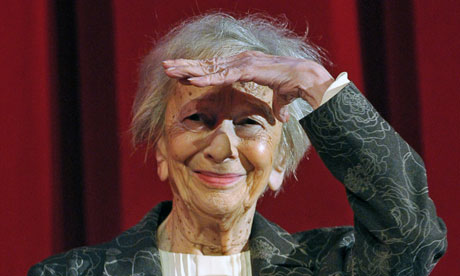 CHILDREN OF OUR ERA


We are children of our era;
our era is political.

All affairs, day and night,
yours, ours, theirs,
are political affairs.

What you say has a resonance;
what you are silent about is telling.
Either way, it's political.

Even when you head for the hills
you're taking political steps
on political ground.

Even apolitical poems are political,
and above us shines the moon,
by now no longer lunar.
To be or not to be, that is the question.
Question? What question? Dear, here's a suggestion:
a political question.

You don't even have to be a human being
to gain political significance.
Crude oil will do,
or concentrated feed, or any raw material.

Or even a conference table whose shape
was disputed for months:
should we negotiate life and death
at a round table or a square one?
Meanwhile people were dying,
animals perishing,
houses burning,
and fields growing wild,
just as in times most remote
and less political.

-
Five more below the fold.

Translated from the Polish by Clare Cavanagh and Stanislaw Baranczak

Despite the geologists’ knowledge and craft,
mocking magnets, graphs, and maps—
in a split second the dream
piles before us mountains as stony
as real life.


Without directors, megaphones, and cameramen—
crowds knowing exactly when to frighten us
and when to vanish.


Without architects deft in their craft,
without carpenters, bricklayers, concrete pourers—
on the path a sudden house just like a toy,
and in it vast halls that echo with our steps
and walls constructed out of solid air.


Not just the scale, it’s also the precision—
a specific watch, an entire fly,
on the table a cloth with cross-stitched flowers,
a bitten apple with teeth marks.


And we—unlike circus acrobats,
conjurers, wizards, and hypnotists—
can fly unfledged,
we light dark tunnels with our eyes,
we wax eloquent in unknown tongues,
talking not with just anyone, but with the dead.


And as a bonus, despite our own freedom,
the choices of our heart, our tastes,
we’re swept away
by amorous yearnings for—
and the alarm clock rings.


So what can they tell us, the writers of dream books,
the scholars of oneiric signs and omens,
the doctors with couches for analyses—
if anything fits,
it’s accidental,
and for one reason only,
that in our dreamings,
in their shadowings and gleamings,
in their multiplings, inconceivablings,
in their haphazardings and widescatterings
at times even a clear-cut meaning
may slip through.

Die—you can’t do that to a cat.
Since what can a cat do
in an empty apartment?
Climb the walls?
Rub up against the furniture?
Nothing seems different here
but nothing is the same.
Nothing’s been moved
but there’s more space.
And at nighttime no lamps are lit.

Footsteps on the staircase,
but they’re new ones.
The hand that puts fish on the saucer
has changed, too.

Every closet’s been examined.
Every shelf has been explored.
Excavations under the carpet turned up nothing.
A commandment was even broken:
papers scattered everywhere.
What remains to be done.
Just sleep and wait.

Just wait till he turns up,
just let him show his face.
Will he ever get a lesson
on what not to do to a cat.
Sidle toward him
as if unwilling
and ever so slow
on visibly offended paws,
and no leaps or squeals at least to start.

THE END AND THE BEGINNING

After every war
someone has to clean up.
Things won’t
straighten themselves up, after all.

Someone has to push the rubble
to the side of the road,
so the corpse-filled wagons
can pass.

Someone has to get mired
in scum and ashes,
sofa springs,
splintered glass,
and bloody rags.

Photogenic it’s not,
and takes years.
All the cameras have left
for another war.

We’ll need the bridges back,
and new railway stations.
Sleeves will go ragged
from rolling them up.

Someone, broom in hand,
still recalls the way it was.
Someone else listens
and nods with unsevered head.
But already there are those nearby
starting to mill about
who will find it dull.

From out of the bushes
sometimes someone still unearths
rusted-out arguments
and carries them to the garbage pile.

Those who knew
what was going on here
must make way for
those who know little.
And less than little.
And finally as little as nothing.

In the grass that has overgrown
causes and effects,
someone must be stretched out
blade of grass in his mouth
gazing at the clouds.

Some--
that means not all.
Not even the majority of all but the minority.
Not counting the schools, where one must,
and the poets themselves, there will be perhaps two in a thousand.
Like--
but one also likes chicken noodle soup,
one likes compliments and the color blue, one likes an old scarf,
one likes to prove one's point,
one likes to pet a dog.

Poetry--
but what sort of thing is poetry?
More than one shaky answer
has been given to this question.
But I do not know and do not know and clutch on to it,
as to a saving bannister.

Nothingness unseamed itself for me too.
It turned itself wrong side out.
How on earth did I end up here—
head to toe among the planets,
without a clue how I used not to be.

O you, encountered here and loved here,
I can only guess, my arm on yours,
how much vacancy on that side went to make us,
how much silence there for one lone cricket here,
how much nonmeadow for a single sprig of sorrel,
and sun after darknesses in a drop of dew
as repayment—for what boundless droughts?

Starry willy-nilly! Local in reverse!
Stretched out in curvatures, weights, roughnesses, and motions!
Time out from infinity for endless sky!
Relief from nonspace in a shivering birch tree’s shape!

Now or never wind will stir a cloud,
since wind is exactly what won’t blow there.
And a beetle hits the trail in a witness’s dark suit,
testifying to the long wait for a short life.

And it so happened that I’m here with you.
And I really see nothing
usual in that.
Posted by BDR at 8:10 AM