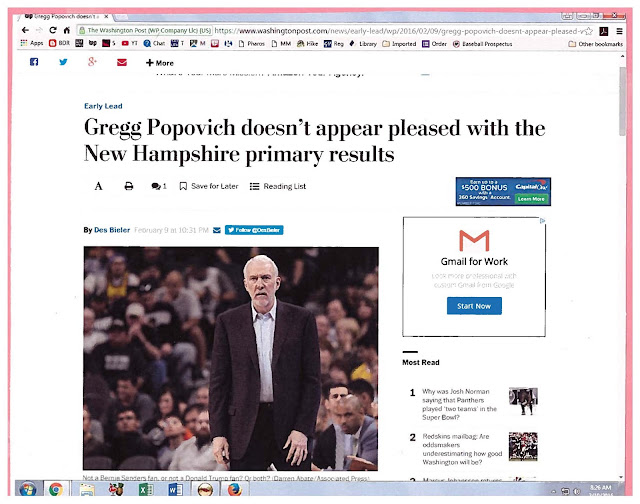 Wrong Popovich. I am asked by a quarter of people I meet and/or engage in a business transaction - I use a debit card in a store, a repairman comes to the house - if I'm related to Gregg. No. Popovich is a common Serbian name. I wouldn't be asked if I lived in Pittsburgh or Milwaukee.

Wanna know a secret? - Hillary Clinton is going to be the Democratic nominee for President and Bernie will throw his full support behind her candidacy. I was driving last night when he gave his victory speech - he pledged to support in the general election the opposition he trounced last night in New Hampshire.

I had a pint last night with a colleague, my friend the Hillaryite. He preemptively dismissed the New Hampshire primary results re: numbers, proclaimed it an advantage for Clinton in she can use the results as cover as she moves to the left to counter Sanders' momentum. I said, that's precisely the cynical move those who dislike her expect her to make and consider icky. Icky, he said. He added, all politicians do it. I said, none of the other candidates for either party has three decades of doing it under a public microscope like she does. She has a record. She's a symbol of herself. He said, it's her turn, it's not fair. I said, she'll be the candidate. He said, I thought you were trying to quit. I said, I can't, forgive me, it fascinates me. The check came, it was my turn, I gave my debit card, the waiter took it, brought it back. Are you related to Gregg Popovich, he asked.

Email ThisBlogThis!Share to TwitterShare to FacebookShare to Pinterest
Labels: Aargocalyptic, About That Ceasing Seething, Brazen Blogwhoring and Attention Sluttery, Dead Blegsylvania, Fuck It, Fuck Me, Music, My Complicity, My Inability to Shut the Fuck Up