The Options for the End Are Endless 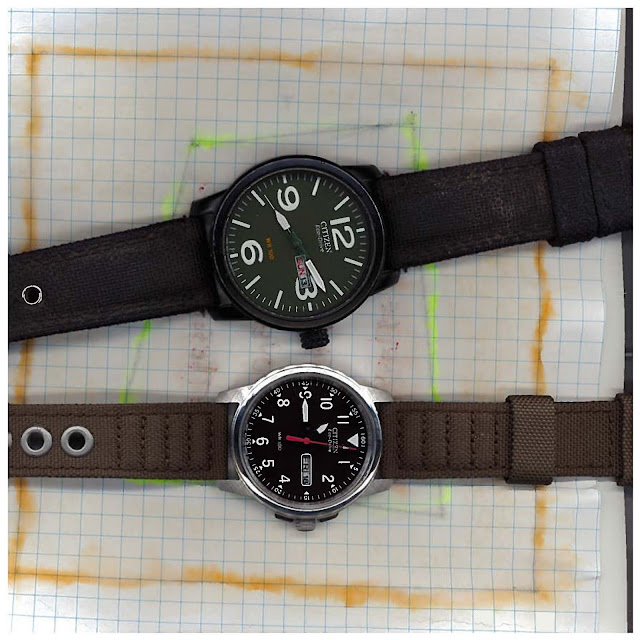 Not only am I disloyal towards my moleskines and boorum & peases by my blind lust for my new Leuchtturm tablet, last Sunday night at 8:12 EDT the clasp of my seven year old Citizen eco-drive green-faced watch snapped, the watch fell onto a sidewalk, has not worked since. I am stupid about watches: I want the one I have to be the one I give to a great-grandchild thirty-five years from now. Once I buy a new watch to replace a hopelessly broken I use the new one until it breaks (they always break) then try to get it fixed (they can't be fixed). I tried to get this one fixed, was told the cost of fixing more than the cost of the watch and the fix probably wouldn't hold anyway, so much was the damage by the jolt to the sprockets and gears. So I abandoned green-faced watch, just like that, except I can't stop thinking about green-faced watch abandoned in a box on my bookshelf, alone, springs taunt, hands tied. I disloyally bought the new one, also a Citizen eco-drive. Me and fucking brand loyalty. I never liked the font of numbers on the old one, I like the font of the new one. I never liked the over-sized diameter of the old one, I especially didn't like the depth of the old one, I like the diameter and depth of the new one. I wish I was wearing green-faced watch right now. I feel like a grifter, the guy who drives his dog to the woods, throws a tennis ball, drives off while the dog thinks it's a game, a traitorous coward. Fine metaphors abound. I'm wearing the new watch: 2051?

It's like this in a lullaby
for the end of the world:

The options for the end
are endless

It's about the beginning
what happens when we start to rot

in the daylight
The way the light shines on

the ants and worms and parasites
loving our bodies

It's about the swarm of dogs
gnawing our skin and bones

To avoid the hole
the children must sing sweetly, softly

To avoid the hole
they must fill their songs with love

Email ThisBlogThis!Share to TwitterShare to FacebookShare to Pinterest
Labels: Borzutzky, Brazen Blogwhoring and Attention Sluttery, Dead Blegsylvania, Fuck Me, MSADI5G, My Complicity, My Inability to Shut the Fuck Up, Pere Ubu