My Concussion Is Still a Hotel

Early Pere Ubu songs. 200 people. Maybe. Probably less. The fuck is wrong with humans. David is old. (I am old.) Might be part act (he doesn't break kayfabe (if he has a kayfabe to break - that's always been the animating question for me)), but watching him get on and off the stage and in and out of his chair, watching the band watch him with looks of concern, his voice, off-key. I wonder if/when he might be back on a stage in my town or a nearby town. Was wonderful, of course, but felt like a last time, but everything feels like a  last time to me now.

The band is as tight as always. 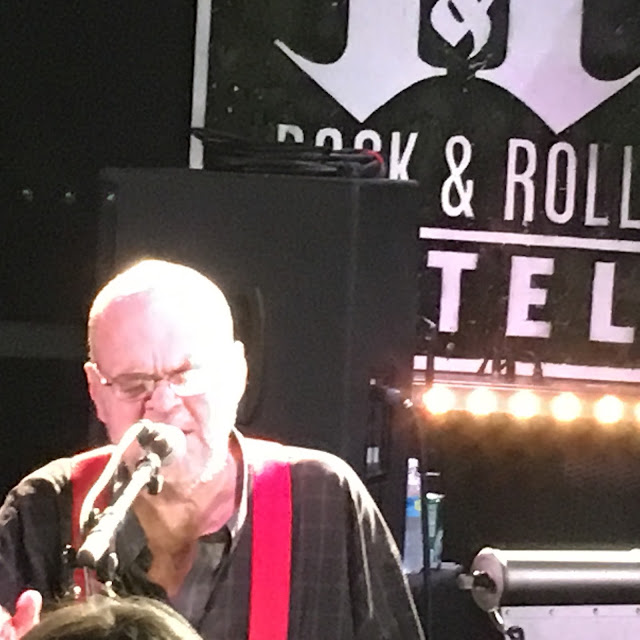 There are no more cigarettes in this letter. It's all about spray-paint and traffic jams from here on out. Honk if you're epileptic, honk if it's 2:40 p.m., if you love shells. Honk in the name of freedom and fear of the human body. When I say "human body" I mean the kind that tears like lettuce. And when I say "fear" I mean the kind you feel seconds before crashing into a wall. That's the kind of poem this is. The kind raised on excess television violence.

All that's left are ads for brotherhood and blowjobs. An ad for 2:42 p.m. A wad of hair. This isn't Marx. I'm not trying to bite the hand that feeds me sour candy. Run down the deer. Rain. Wear a red jacket and pumps. Pave the road back from my bed. I don't own a bed, it must've been the trap I've crept in and out of since I learned how to sleep alone. The Count of Monte Cristo's funeral. God's earlobe. An army of lamb can stop a film but not the violence of handbags. Not 2:43 p.m. Two forty-four pee em. Speak from a babble and a switch. Piss in a telephone booth. Grow a tree. Kidnap a car thief. Talk to him as though you want to be slammed in his trunk like a bag full of rocks.

Talk to me in the woods. To my chest. With your fingers.

Even if you kick in the gates, nyc is still nyc. My concussion is still a hotel. The guests are staying lukewarm and I'm picking up the tab. Ask me if I have ever wanted to tear out cables, burn up cradles. Interview my architects about hands. Ask an illegal immigrant how to escape from a political cliche. Does one use hammers? What about the moist area? The brutal caress? The spindle? Where does one learn to speak such a broken language? Are you jealous of films about Vietnam?

Someone has slashed its chords and ripped out its face. This drink is mixed with a plastic fork. This is an invitation to my Halloween party. Come as a key. Come as a metatextuai tear in the metatextual fabric.

Listen to my concert through walls that were built to keep the vermin out of my armpits. Shovel. That's all I ask in return for my sonata on gravel. I mean gravel in a dialectic sense. As in, tomorrow dirt will be glamorous. Asphalt will be categorized as a sound. You will be categorized as an outdated method of psychotherapy. Like confession. Or the couch. Or the chair. I will be classified as a sore loser. Last year's winner must have thrown something hard at my head. Something that shattered like a waltz in a bomb raid. It's almost three o'clock. That makes it exactly several thousand miles since I left your town. I left your mice. I left a confusing note for the exterminators.