That Dog, for Example, Whose Refusal to Leave My Side I Mistook, as a Child, for Loyalty - When All Along It Was Just Blind 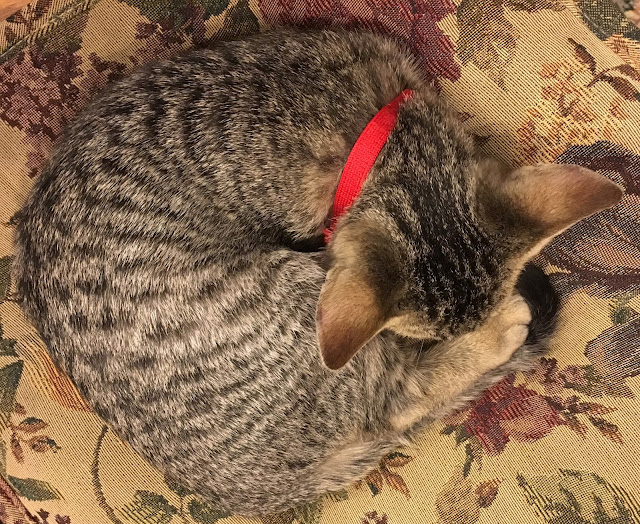 That's Luigi, one of two new RESCUE! kittens by our new going-ok maybe-someday-friends M & J, who had us + Planet & Air over for dinner this past Friday. Kittens of a feral, they've been in the house less than a week, still skittish. M's daughter G was there along with her partner B, M & J & G & B never knew cats like having their paws deep massaged, eyebrows guitared. What are you doing? M asked, Luigi purring, he barely will let me touch him. I like them - M & B came with me and Earthgirl on a hike yesterday - but you've had cats for how many years?

The other kitten's name is Wolfley (people can vouch), sorry I don't have a photo, he was the shier of the two. When I heard his name Bonnie Prince Billy played in my head.


Somewhere, people must still do things like fetch
water from wells in buckets, then pour it out
for those animals that, long domesticated, would
likely perish before figuring out how to get
for themselves. That dog, for example, whose
refusal to leave my side I mistook, as a child,
for loyalty — when all along it was just blind ... What
is it about vulnerability that can make the hand
draw back, sometimes, and can sometimes seem
the catalyst for rendering the hand into sheer force,
destructive? Don’t you see how you’ve burnt almost
all of it, all the tenderness, away, someone screams
to someone else, in public — and looking elsewhere,
we walk quickly past, as if even to have heard
that much might have put us at risk of whatever fate
questions like that
spring from. Estrangement —
like sacrifice — begins as a word at first, soon it’s
the stuff of drama, cue the follow-up tears that
attend drama, then it’s pretty much the difference
between waking up to a storm and waking up
inside one. Who can say how she got there —
in the ocean, I mean — but I once watched a horse
make her way back to land mid-hurricane: having
ridden, surfer-like, the very waves that at any moment
could have overwhelmed her in their crash to shore, she
shook herself, looked back once on the water’s restlessness —
history’s always restless — and the horse stepped free.

Email ThisBlogThis!Share to TwitterShare to FacebookShare to Pinterest
Labels: Be Kind Motherfuckers, Bonnie Prince Billy, Brazen Blogwhoring and Attention Sluttery, Dead Blegsylvania, Fuck Me, George, MSADI5G, Music, My Complicity, My Inability to Shut the Fuck Up