Who Decides Against Our Teams 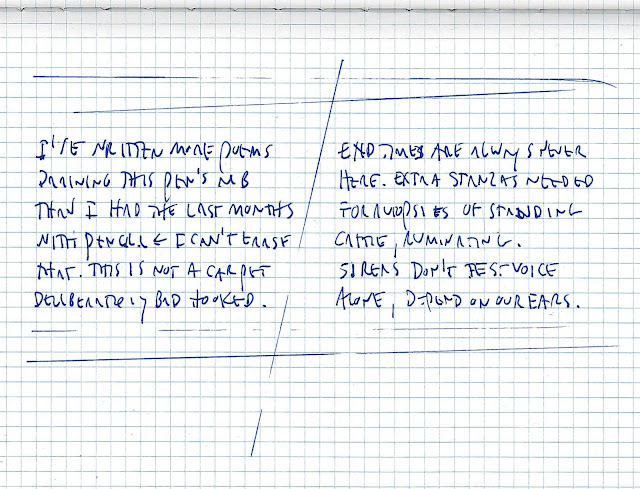 Mary Tyler Moore's death. I've not been moping and not posting, or didn't think I'd been moping, been successful in producing unsuccessful pages on (like always) me and faith. I'm small, I need a team. I saw a tweet Mary Tyler Moore was dead. For Liberals of my age that show was gospel. I thought of the Husker Du cover of her show's theme song, I youtube it, there's the show's theme song, click the arrow, Mary throwing her hat in the air, and it slayed me, a Eucharist of Nostalgia.

Cool gales shall fan the glades

But how choose the appropriate sticking point to start at?
Who wants to write a poem without the letter e,
Especially for Thee, where the flourished vowel lends such panache to your carnet de bal
(OK, peons: pizzazz to your dance card)? The alphabet’s such a horn
Of plenty, why cork up its treasure? It hurts to think of “you” reduced to u
In stingy text messages, as if ideally expression should be limited to formulas like x ≠ y,

Where the respectable truth of tautology leaves ambiguous beauty standing by
Waiting to take off her clothes, if, that is, her percentage of body fat
Permits it (a statement implicitly unfair, as if beauty, to remain sublime, had to keep up
Lineaments already shaped by uninhibited divinity); implying, as well, fixated onlookers, i.e.,
Men and women kidding themselves that full-front-and-back nudity is the north
Star of delight rather than imagined nakedness, shudderingly draped like a fully rigged, fully laden ship without a drop to bail,

Its hidden cargoes guessed at — perhaps Samian wine (mad- making!) — or fresh basil
Gently crushed by its own slight weight, reviving memories of delights once stumbled on as a boy,
Delights often wreathed with necessary pain, like the stout unforgiving thorns
That tear shirt and skin as we stretch for ripe blackberries, to be gulped down fast,
Sweeter than butter and marmalade, quenching our thirst better than sucked ice,
Making us almost drunk as we shriek with false contempt at each benighted ump

Who decides against our teams. What happened to those blissful fruits, honeydew, purple plum,
White raspberry, for stealing which from Mrs. Grossman’s stand I invented ingenious alibis
That she never believed (insulting, or what?)? Where are childhood’s innocent sweetnesses, like homemade rice
Pudding and mince pie? Or the delicious resistances of various foods — bony
Lobsters, chops with their succulent tiny interstices, corn sticking to the cob, or the grilled feast
Of brook trout I caught without too much fuss after kicking a  resentful hornets’

If I didn’t, in spite of all, feel so grateful to you. All manner of mercis
Fill my throat, along with immortal memories, of which I must acknowledge the thorniest
To be your disappearance, whether you tanked in river water or were scorched by Zeus’s proximity (or some such baloney);
But your firm breasts, taut nipples, and bent thighs? No thorns. All you wanted was a loosened peplum,
So I still bear your plume, and your name will not die: not to be written here or read, but my voice shall sibilate
It so shrilly that unseeded babies hear me, and every hidden woodworm wake from its dream to fall forever from the rafters.

Email ThisBlogThis!Share to TwitterShare to FacebookShare to Pinterest
Labels: Autoblogography, Brazen Blogwhoring and Attention Sluttery, Death, Fuck Me, John Cale, MSADI5G, Music, My Complicity, My Inability to Shut the Fuck Up, My Obligations, Yo La Tengo