Star Trek, the original but especially Next Generation, my primary indoctrination text on American exceptionalism and capitalist imperialism, we are good and kind and generous conquerors, yo, leaving galaxies of planets better for our conquering

I tried watching an original episode - the one with Nazis when Mike Pence played John Gill - a few months back, was awful and interminable, but today the centennial of Bones' birth, and since once upon a time I did watch it, day after day on reruns: 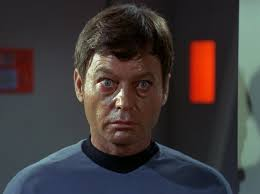 If you will grant me that most of us have an equivocal nature,and that when we waken we have not made up our minds which direction we're headed; so that—you might see a man driving to work in a perfume- and dye-free shirt, and a woman with an overdone tan hold up an orange flag in one hand, a Virginia Slim in the other—as if this were their predestination. Grant me that both of them were likely contemplating a different scheme of things. WHERE DO YOU WANT TO SPEND ETERNITY the church marquee demands on the way to my boy's school, SMOKING OR NON-SMOKING. I admit I had not thought of where or which direction in exactly those terms. The radio ministry says g-o-d has a wrong-answer button and we are all waiting for it to go off...

Email ThisBlogThis!Share to TwitterShare to FacebookShare to Pinterest
Labels: About That Ceasing Seething, Brazen Blogwhoring and Attention Sluttery, Dead Blegsylvania, Fuck Me, Futility, MSADI5G, My Blindness, My Complicity, My Inability to Shut the Fuck Up