Copper Beech, Parental in Its Girth

Gorgeous light yesterday, we only had two hours so Great Falls Gold Mine Loop and branches, Valley Trail down gorge then Woodlands Trail on ridge above Widewater then down up it's own gorge, my favorite mile and a half within an hours drive (it's fifteen minutes, traffic-permitting)(including any 1.5 mile section of Sugarloaf), beech trees still dead leafed, and the amazing giant beeches have such thick canopies in Summer no underbrush, released beech leaves carpet 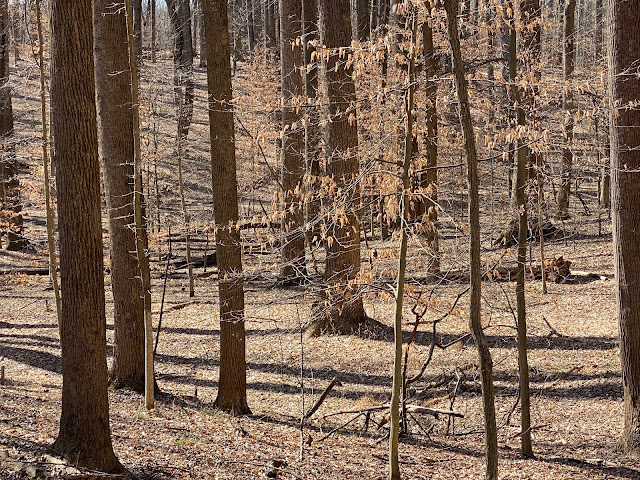 THE MARRIAGE IN THE TREES


When the wind was right everything else
was wrong, like the oak we thought built
better than the house split like a ship
on a rock. We let it stand the winter,
spectral, shagged, every sky its snow,
then cut it down, dismantled it in
pieces like disease. Then limbs from
the yellow poplar broke at will—
fell from the heights like bones
of the Puritans; even to gather them
in bundles seemed puritanical.
And the willow, by its nature, wept
long tears of its overbranching,
so pale they were autumnal. These
we turned too easily to switches,
mocking the bickering in the spruce's
nesting eaves, which crows, then jays
bothered all they could. The list,
the list. The sycamore made maps
of disappearance; the copper beech,
parental in its girth, was clipped
hard, by a car, with a wound that wouldn't
heal. Doctoring, then witchery, then
love—nothing we tried would work.
More apple trees that grew nowhere
but down. More maples spilling sugar.
More hawthorns blazing out, telling truth.
Posted by BDR at 8:22 AM