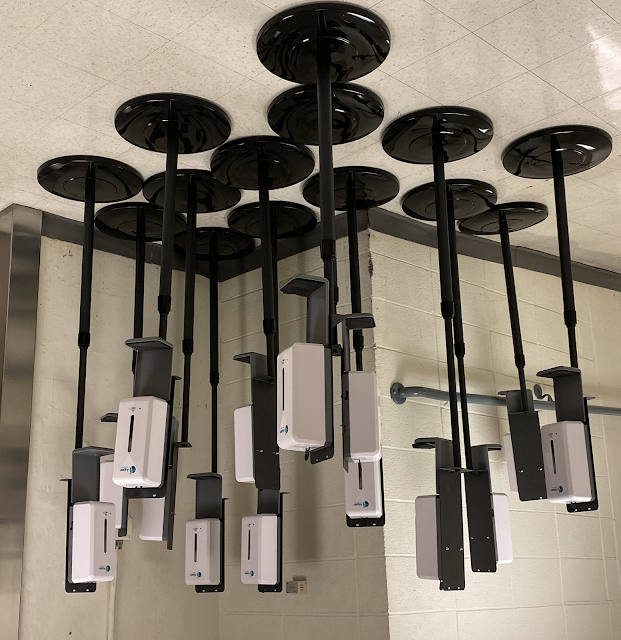 unhinged from rhythm
but I can count good. Kayfabe
(you knew I'd say that)

unhinged from promise
but - this is key - in on it.
I'm talking to me


ONE DAY I SUDDENLY NOTICE

Abstract for a happy poem

You made your students write stories about happiness and they were, you said, the worst stories of the year. Remember the pregnant woman? in a Fontainebleau café, I meant to reset it in America when I wrote the poem, she was sordid with mammalian culmination, dissatisfied with the first table she chose, the chair, with too much too hot sun soaking her through the picture window, she gathered crockery, groceries, her unsatisfactory handbag in order to move but the space between tables was small and the deadweight of  her near-term baby in the moonbounce of  her body made her clumsy, trip, fall, splash, and spill her au lait into a man’s open laptop.


His screen went blank. She broke into tears. Him so angry and sorry for her he couldn’t speak. He lifted the milk-glopped computer out of the coffee; it dripped viscous stalactites onto the table and his knees and the floor, pooling around tasseled, perforated loafers. The woman at the end of  her tether. Tears dribbled down her face to her blouse and into the now-empty cup she swooped over to pick up nearly losing her balance. That happens pregnant: you forget for a minute and the front weight shocks you. The man, scrunched up in an expensive embroidered sweater, navy, thread beads, intricate, abstract in pattern, with thighs to make you think of sex, was heavy too with urgency to save circuitry, get back to his important work, money work, stocks work, smoke-and-mirrors work, rather like poetry, without forgiveness or incivility. His earpiece lighting up with calls he didn’t take.


Somebody in the background mumbled about Marine Le Pen ... Someone I think said something about the poor quality of the produce at the Intermarché Super et Drive, for C’est affreux! they said knowing and happily, tapping a newspaper. Euro! somebody spat, still grinding that axe. Somebody asked the waiter for l’addition who said if you are hiking in the forêt there is a hunt—chasse—in progress—en cours. Story and wound, deer, wild boar, trampling the underbrush. We peeped into lives made interesting by our watching. We at least (a happy part) were content. Note to self: put in some exquisite lines about the light in the forest, the openness between trees.


Pregnancy (unwanted, wanted, each kind harasses for all except the super-confident) and affluence meeting over coffee, ambition, and hormones. Some business of apology and napkins as coffee dripped milkily from table to floor and he finally moved his feet. What happened next: did she find a seat? Did his computer recover? Their faces hardly in motion. None of the shock of the scream of formation fighter jets but an army cargo plane bumbled low in the sky above the café, a cache of what in its belly? The very deepness of its gray. The man, the pregnant woman, looked up. The story stops there. Could be a meet cute. Or everything falls apart. My student wanted to know if the girl in the Hemingway story decided to get an abortion or not. “I like closure,” she said. The woman has no ring. So, what if he falls in love with her maternal body, discovers fatherhood’s more important than work, while she—what? Now everything plots without them 2... You see how gravid cancels the imagination, renders mother an instrument for other characters’ moral and emotional development, cancels a story trying to become about guns, money, and war. After all, they were only two people wordless with reaction, moving unknowable even to themselves, nothing due them but some final punctuation
Posted by BDR at 10:57 AM

Email ThisBlogThis!Share to TwitterShare to FacebookShare to Pinterest
Labels: About That Ceasing Seething, Brazen Blogwhoring and Attention Sluttery, Fuck Me, My Blindness, My Complicity, My Inability to Shut the Fuck Up, Plague 2020