I Will Admit That I, Too, Have Been a Sad President

Earthgirl watched so I heard parts of it before putting on earbuds and listening to music, I take it things went exactly as expected and nobody's mind has been changed, everyone more aghast at the one each hates more than before, or if you're like me, both

We hiked Sky Meadows in Paris, Virginia, Monday, the Ambassador Whitehead Trail that runs between the Piedmont Overlook Trail and Appalachian Trail my favorite 1.1 mile of trail within a fifty mile radius of our house. Goldenrod and yarrow and aster and thistles rampant, meadows as kaboom this Fall as woods 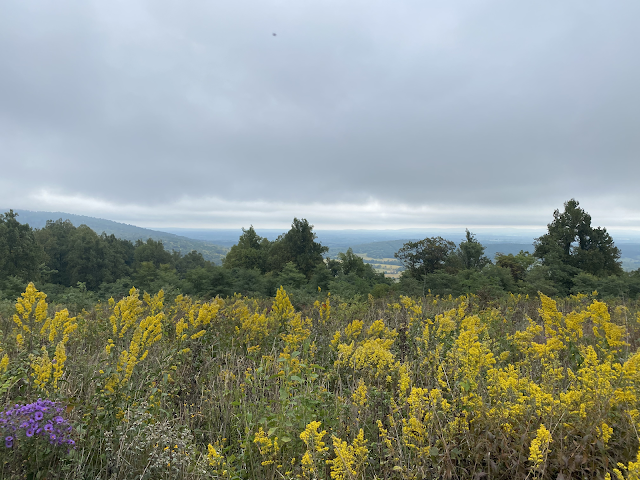 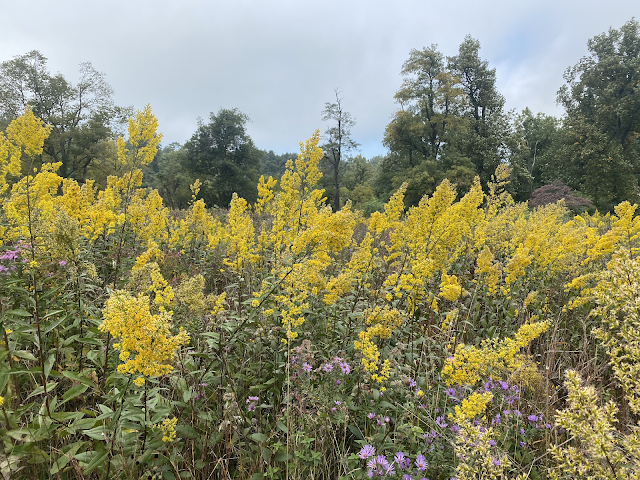 found at the bottom of a ballot box

or, THE REPUBLIC: AN ELECTION TALE

To wake each day to discover that it is the day of election, as it has been every day of one's life -- to find that the end has come, that the tricksters have tricked, that the tabulators will tabulate, the balloons will drop, the conceders will concede, and that the victorious will once again by midnight declare victory in a battle that in the morning will begin again -- is to wake each day as a president whether a person would like to be one or not.

The elderly die president. Infants are born as such. Everyone in between-- all presidents! -- bears his or her or their own image, name, record, platform; all are giving speeches, shaking hands, prosecuting clandestine and semi-clandestine wars. Every day is a four year term. Each face is flattened as if for a commemorative coin. To draw a diagram of the nation would be to draw a pyramid of presidents, with the most presidential president on top, the presidents of other presidents making up the narrower parts, and the ordinary presidents, who are merely the presidents of themselves, crowded together in the pyramid's wide base.

It used to be that a woman could not be president: now it is the case that a woman could never not be president. It is the same for many of us, those made of formerly unpresidential material, who now not only must be president, but must be a president-plus, perma-hyphened to executive-particulars.  It is not even the case that one must be a citizen to hold the presidency. As the means of life are not available without a campaign, no one who comes to this land who is not president could survive it without being one. Every inauguration, we are promised, is a dream come true.

As we each are president, it is also true that we must also be nations. A president needs a body over which to preside. The nation is a painful shape, in that a border is a cut that never heals, yet anyone who can afford it sleeps each night in a 400-thread count map. "Faultline: On Republics before Borders"  appeared 873,493 election cycles ago at the presidential museum, but the race was narrow, then, and no one could pull away from the polls to see it. And here are the records I have reason to believe are omitted from the presidential archive:

"on how the stars are a parliament"

"that the oak is an elder"

"behold! a soviet of sparrows"

But governing and governed, campaigning and campaigned upon, the demarcation between each small nation drawn with the tip of the sword, this nation of nations, teeming with presidency, has only itself as a memory.  Our official history is written with one word (president).

Perhaps it is a thrill to be a big president over other presidents, deciding life and death, but how forlorn it is to be a smaller president in the pre-dawn hours, riding the bus to one's day job, already exhausted from the heaviness of the executive orders in one's tote bag. To wake each day to yet another election means there are  many unhappy mornings of unhappy presidents, ill-suited for the role, who would rather have any other kind of day, would like  a saints day in which there was only praying or a day on which nothing really happened and everyone ate cereal. Yet the unhappy president has, like all presidents, sipped her morning coffee from her flag-colored cup.  She is a president on the brink, forever impeachable, sullen, yet unable to resign.

I will admit that I, too, have been a sad president among sad presidents. I am always misplacing my official seal, forgetting to sign the legislation, getting drunk and making a game of crawling into a flag-draped coffin in imitation of my own state funeral.  Sometimes in the hours between the midnight balloon drop and the dawn caucus, I let myself believe the rumor we are not supposed to tell, the one of a renegade president who burns any ballot with her name on it. It is said she sleeps through the mandatory debates on a blanket embroidered with the outlines of the loins of demagogues.

I dream of someday meeting her, how I would tell her that although our great nation has achieved universal presidency, I believe we have yet to have had a successful presidential administration, and that I would like to implement a four part plan to correct this oversight.

What we really have, she would whisper in my ear after straightening her tie, twisting her flag pin, and glancing over her shoulder, is the administration of life into a system of presidents, small and large, in which each must campaign against the other so that none can ever win. In this way, the state's inevitable failure is felt as an individual failure for which there can be no remedy but the intensification of one's own campaign, which hitherto was insufficiently ruthless. It is in this way that fulfilling common need with common methods for the common good is intentionally forestalled.

Email ThisBlogThis!Share to TwitterShare to FacebookShare to Pinterest
Labels: About That Ceasing Seething, Boyer, Brazen Blogwhoring and Attention Sluttery, Dead Blegsylvania, Fuck Me, My Blindness, My Complicity, My Inability to Shut the Fuck Up