I Would Rather Concentrate on the Rapidity of Your Ideograms

I couldn't get Fleabus in the cat-carrier continuing a seventeen year old tradition, one of the reasons we chose our vet who pre-plague would come to the house and see all the cats in one visit, so I took Rosie instead who is healthy but fat like each of us, NO MORE KIBBLE! said the vet who rages against dryfood and always has, I've driven Napoleon and Olive and Rosie to vet the last three weekends, made an appointment for next Saturday for cat-to-be-named-later, either Fleabus or more likely Stanley, who has never figured out me or me him, he looks good in a box 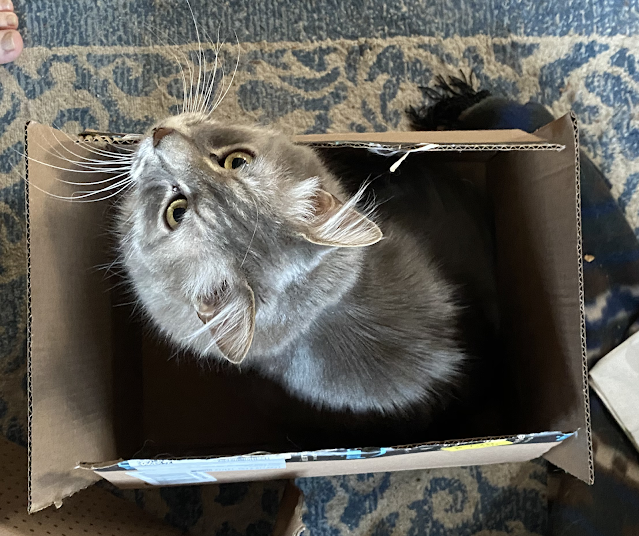 Plague capitalism / Shitlords, yo / Shitlord censorship, part one / Shitlord censorship, part two / Shitlords, yo / Rage Kapital / Shitlords, yo / Ressentiment / We were on Browning Run Trail yesterday just before it begins gentle descent off Putnam Trail and an old (as in my age) man trail-running huffs up the trail, coughing, spraying, maskless, I said, behind my mask, please wear a mask, not PLEASE wear a mask, not wear a mask, asshole, and asshole he was, my first in-person cracker mask meltdown, we kept on walking, Fuck you fuck you fuck you he kept on shouting / Motherfucking Democrats / America's Australian coups / The European Coup (sorry, paywalled, I can scan a pdf for you (not today) if you ask nice / Earthgirl before the hike (while I was at the vet with Rosie) had her Saturday morning conversation with our cracker family friend who was particularly cracker, we were talking about it when cracker trail-runner came spraying his cracker aerosol drops on us, perhaps I *did* say it PLEASE! wear a mask though I did not call him an asshole at first / Coincidence / Maggie's weekly links / Velleity / Chrome is bad / Brave? Anyone? / I am telling you three times there is still profit extractable from angry white people / The elephant in the room /{ feuilleton }'s weekly links / New Rachel Kushner story / Brave with Tor, any bot that wants to spy on me will spy on me no matter what tiny middle finger I wave at it / The reality of color / Tom Verlaine is seventy-one today

"They won't attack us here in the Indian graveyard."
I love that moment. And I love the moment
when I climb into your warm you-smelling
bed-dent after you've risen. And sunflowers,
once a whole field and I almost crashed,
the next year all pumpkins! Crop rotation,
I love you. Dividing words between syl-
lables! Dachshunds! What am I but the inter-
section of these loves? I spend 35 dollars on a CD
of some guy with 15 different guitars in his shack
with lots of tape delays and loops, a good buy!
Mexican animal crackers! But only to be identified
by what you love is a malformation just as
embryonic chickens grow very strange in zero
gravity. I hate those experiments on animals,
varnished bats, blinded rabbits, cows
with windows in their flanks but obviously
I'm fascinated. Perhaps it was my early exposure
to Frankenstein. I love Frankenstein! Arrgh,
he replies to everything, fire particularly
sets him off, something the villagers quickly
pick up. Fucking villagers. All their shouting's
making conversation impossible and now
there's grit in my lettuce which I hate
but kinda like in clams as one bespeaks
poor hygiene and the other the sea.
I hate what we're doing to the sea,
dragging huge chains across the bottom,
bleaching reefs. Either you're a rubber/
gasoline salesman or like me, you'd like
to duct tape the vice president's mouth
to the exhaust pipe of an SUV and I hate
feeling like that. I would rather concentrate
on the rapidity of your ideograms, how
only a biochemical or two keeps me
from becoming the world's biggest lightning bug.

Email ThisBlogThis!Share to TwitterShare to FacebookShare to Pinterest
Labels: Brazen Blogwhoring and Attention Sluttery, Dead Blegsylvania, Fuck Me, Futile Weekend Blogging, My Blindness, My Complicity, My Inability to Shut the Fuck Up