And Yet in the Ongoing Negotiations Between the World Where I Hold My Daughter and Famine, Bombings, Hate, Prosperity — Two Notes, Octaves Apart Attenuate What's Hidden Inside Your Body to the Invisible

The glaucoma medicine that's saved me from eye surgery (or rather, delayed my eye surgery) makes me always look like I'm stoned, I wish sometimes, but no. I do plan on visiting a Legal Weed Store in Michigan since I now own property three miles from one if and when I ever see the property I own in Michigan.

Self-negotiation with that effing whale novel have re-opened, will I agree to skip the sections of human torturing whales to death to get to where the whale kills the humans?

Separate self-negotiations between *two* Ishs, the one above, the other who wrote Klara

Self-negotiation with disc golf crawling, I have not thrown plastic at metal baskets since plague's inception, 9/10ths hike first with Earthgirl over parking Roc, doink putt, 1/10th first hike with Earthgirl (Dr Z emailed two days ago, Seneca is a muddy mess and Dietles has been ordered to serve food).

Self-negotiation on this longest sustained manic uptick I honestly can remember is complete, fuck it, I'm riding it out.

Fleabus the best cat ever. I may get to hug the person who gave me the phone case in April. I got Doctor Sevrin ears. 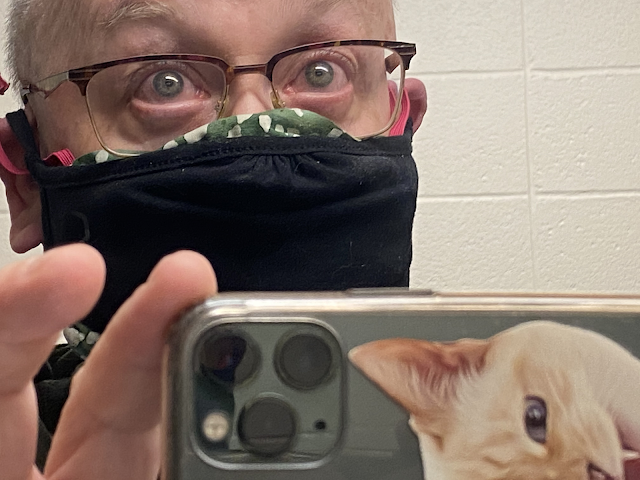 Fladry: a line of rope mounted along the top of a fence, from
which are suspended strips of fabric or colored flags that will flap
in a breeze, intended to deter wolves from crossing the fence-line.

I am weak and edible. Some human quality
stays weird, alien to the wild, outsiders,
bad sport with spooky habits not just fladry—
other enchantments against order, house paint,
yard art, border fences and the tunnels under borders,
the amen, the wedding ring, the flavored condom.
The wolves are back. I've seen them, seen the fladry
ranchers tie, red flags' flutter to puzzle or annoy,
folk-work tendered back from wood-shadow,
more each year, abjured with clover.
What I like most about the first shot of bourbon
is how it feels like letting go of a grudge.
In the dream, I kill my friend and bury him
lime in the church basement between sump pump
and broken fireplace. On my knees I tile
red stone back to mosaic. Soldiers beat me up
and called me names in my own language,
this one, the one Whitman used to soothe
the dying, limbless, the bleeding, the infected.
Beat me with fists slight more stone
than the shape that holds this pencil.
A house is held together by shapes.
And yet in the ongoing negotiations between
the world where I hold my son and
famine, bombings, hate, prosperity—
two notes, octaves apart
attenuate what's hidden inside your body
to the invisible. It might help remembering
shadows and not hours. Infinity
also has the contour of a children's game.
Infants remember fladry, safe in the car seat grasping,
grasping. Some forces are enormous and move
against you, and when you pretend they aren't
there, surge. Some swing on a hinge
which at night sounds like don't look back,
don't look back. Anyone can tie fladry.
See it out riding. I go out at French-horn dawn,
boots in mud, string fladry at intervals,
each tongue labeling the field, calling
beyond language. And if fladry bears
the conditions of a spell, redness of the flag,
the measure between them, it's flapping
which charms the wolf away, for a term.
Warnings to keep the flock from the wolf's belly.
Messages for ourselves. See it from there,
turn overall and plaid flannel; we would
tear our own fur to cross these lines.
Posted by BDR at 11:00 AM

Email ThisBlogThis!Share to TwitterShare to FacebookShare to Pinterest
Labels: Brazen Blogwhoring and Attention Sluttery, Dead Blegsylvania, Fuck It, Fuck Me, Fuck This, My Blindness, My Complicity, My Inability to Shut the Fuck Up